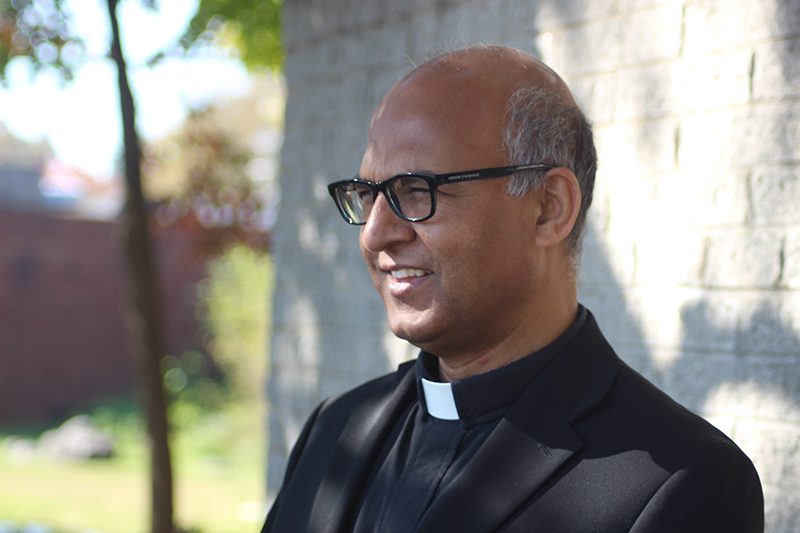 Father Tariq Isaac, chaplain of Philadelphia’s Pakistani Catholic community, fled to the U.S. with his family after experiencing persecution from Islamic extremists in Pakistan. (Photo by Gina Christian)

A local Pakistani Catholic priest is grateful to learn that Asia Bibi, a Catholic convicted of violating Pakistan’s strict blasphemy laws, has had her death sentence overturned.

Father Tariq Isaac, chaplain of the Archdiocese of Philadelphia’s Pakistani Catholic community, called the announcement “very good news for all the people who are raising their voice for justice.”

Pakistan’s Supreme Court announced its verdict on Oct. 31, ruling that Bibi had been acquitted and should be released from death row immediately.

The 51-year-old farmhand, who has spent the past eight years in solitary confinement, was convicted in 2010 of insulting the Muslim prophet Muhammad during a disagreement with a coworker.

Bibi’s case has long garnered international attention, with Pope Benedict, Pope Francis and a number of human rights groups calling for her freedom. In their 56-page decision vacating the sentence, the judges cited “glaring contradictions” in the prosecution’s evidence.

Although she has been cleared, Bibi and her family remain under threat from extremist groups, who have staged violent protests throughout Pakistan in response to the verdict. The leader of one hardline Islamist party called for the assassination of the three judges who presided over the proceedings. Pakistan’s bishops have cautioned Christians to show restraint in celebrating the verdict to avoid coming under attack.

Bibi’s lawyer has said that his client and her family will need to flee Pakistan for their safety – something Father Isaac and his family have had to do themselves.

Seven years ago, Father Isaac’s brother and several other Christians were arrested for blasphemy in the family’s hometown of Gujranwala, near Lahore. Burned and vandalized copies of the Koran had been placed in front of their houses by local Muslim and political leaders, who then charged and imprisoned the minority group.

Most of the archdiocese’s Pakistani Catholics and Christians have similar stories to tell, said Father Isaac, now in residence at St. William Parish in Philadelphia.

About 60 Pakistani Catholic families currently attend a regular Sunday Mass celebrated in Urdu (the official language of Pakistan) at St. William. The community, which includes an active youth group, also gathers for dinners and faith formation classes. Father Isaac estimates there are an additional 200 to 300 Pakistani Christian families from other denominations in the Philadelphia area.

Ultimately, Father Isaac sees Bibi’s release as a triumph of truth over sectarianism, and a demonstration of courage in the face of extremism.

“This is not a question of Christian or Muslim, but an example of how these judges took the burden on their shoulders to give a right decision, a just verdict,” he said. “I don’t say that they should give decisions in favor of Christians or in favor of any particular religion. Justice should be based on rights and according to the laws.”

At the same time, he remains cautious about the prospect of religious freedom in Pakistan.

“I don’t think it will happen,” he said. “There is only one possibility, and that is if the government takes stern action against extremists. But officials themselves are afraid of them, and fear that if they take any action, their own families could suffer.”

He added that Christians in other nations can support their Pakistani brethren by making world leaders more aware of their plight.

“That means approaching government officials here in America to let them know what is really happening to Christians in Pakistan,” said Father Issac, noting that U.S. leaders often dialogue only with majority Muslim leaders from Pakistan.

Father Isaac stressed that Pakistani Christians need spiritual solidarity from their fellow believers more than ever.

“Our bishops have told us to be patient,” he said. “We need prayers for peace in Pakistan.”