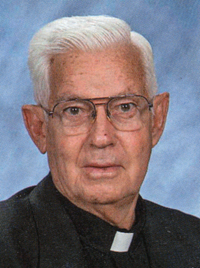 Father Joseph T. Murphy, 94, an educator in the archdiocesan high schools for many years, died Nov. 19.

Born May 7, 1924 in Branchdale, Pa., the son of the late Edward C. Murphy and the late Margaret (Crowe) Murphy, he attended St. Mary Star of the Sea School in Branchdale, St. Aloysius Academy in West Chester and St. Charles College in Catonsville, Md., before entering St. Charles Borromeo Seminary.

He was ordained May 31, 1947 at the Cathedral of SS. Peter and Paul by Bishop Hugh L. Lamb. His first assignment was as parochial vicar at St. Joseph, Girardville.

“He was very important to teaching,” said Father Joseph Brandt, who knew Father Murphy for many years. “First he taught at St. Thomas More (High School), then was on the founding faculty of Cardinal Dougherty and 30 years at Roman Catholic. Last year Roman named a language lab for him. He played sports up until his 80s.”

“He was a boxer when he was young, and he had a funny sense of humor,” recalls Father Anthony DiGuglielmo, who was stationed with Father Murphy for a time. “He was well respected by the students at Roman Catholic. He always celebrated Mass at 6:30 a.m. and for years said his breviary in Latin. He was the type of priest people take a liking to.”

After his teaching career Father Murphy served as parochial vicar at St. Luke the Evangelist Parish until his 1996 retirement.

Mike Finnegan, a former alumni president at Roman, remembers Father Murphy as “a stern guy, but very good with the students,” he said. “He was well loved and respected. When we started giving the Thomas Cahill Award, named for the founder of Roman Catholic, he was the first recipient.”

According to the citation given at that time, Father Murphy taught English, French, Greek, Latin, college prep, church history and world history and was the longest serving priest-teacher in the archdiocesan high schools.

There will be a viewing for Father Murphy at St. Luke, Glenside on Saturday, Nov. 24 at 9:30 a.m. followed by his 11 a.m. funeral Mass celebrated by Bishop Edward M. Deliman.

Concelebrants will include Father Brandt, Msgr. J. Michael Flood, Father John McBride and Father DiGuglilemo, who will be the homilist.

Father Murphy is survived by nephews and nieces.

NEXT: Sister Marita, longtime nurse for infirmed sisters, dies at 85