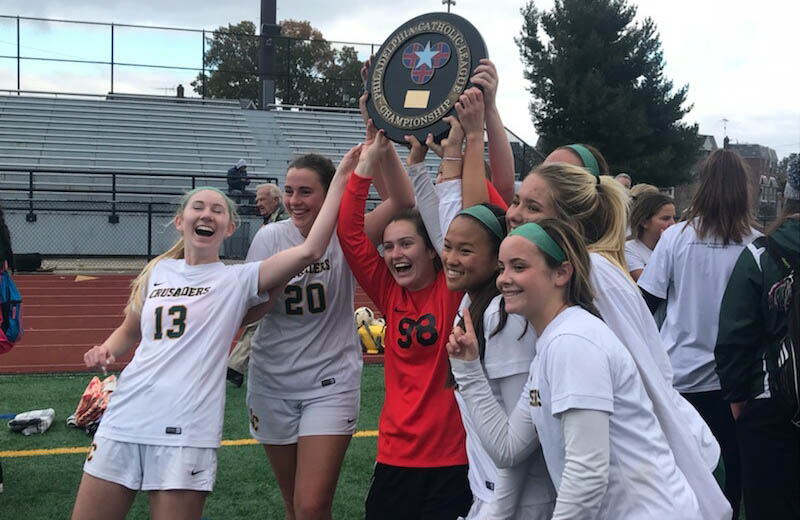 Bree Benedict tried to take it all in.

As coach, Benedict recognized how much hard work went into the victory, played at Northeast High School on October 28. When she saw the ecstatic Crusaders mob each other in front of the Ryan net, followed by family, friends, and fans racing to join them, the first-year coach felt an enormous wave of pride.

“I’m very blessed to coach them,” said Benedict. “There were a lot of nerves heading into the championship. I was in the stands last year and saw a lot of kids I coach at travel heartbroken. It certainly felt like now or never.”

Lansdale Catholic, this year’s two-seed right behind top-seed and defending champion Ryan, was the only team to defeat the Ragdolls during the regular season.

“Our focus in pregame and throughout the game was playing for our seniors and sending them out right,” said Benedict. “This group of girls always puts each other first. They love spending time together and have become a second family for me and each other. I am so proud of them and very honored to coach at LC with this incredible culture.”

After Fitzpatrick redirected the ball behind the line, bedlam ensued.

“It came right to me and I knew I had to get this in cause you don’t get many opportunities to score, especially in overtime,” said Fitzpatrick. “It was just a reflex. I did see an opening. I was like, ‘Wow. We just won the PCL.’”

Benedict was particularly glad that Fitzpatrick emerged as the heroine.

“It was awesome to see her get the goal in overtime for the second time this year on Ryan,” she said. “She’s an incredible athlete with speed and great one-versus-one attacking abilities. She had one of the best games of her life, and although the goal was unconventional, it was completely deserved.”

“I don’t feel as much as they feel,” said Shuster, looking over her right shoulder and smiling as she watched her teammates share the moment with fans in the stands. “I only transferred last year, so that’s their fourth year and this is my second. But I’m still as happy as I could ever be.”

(John Knebels can be reached at Jknebels@gmail.com or on Twitter @johnknebels.)

PREVIOUS: Sure, losing hurts, but character shows in handling defeat