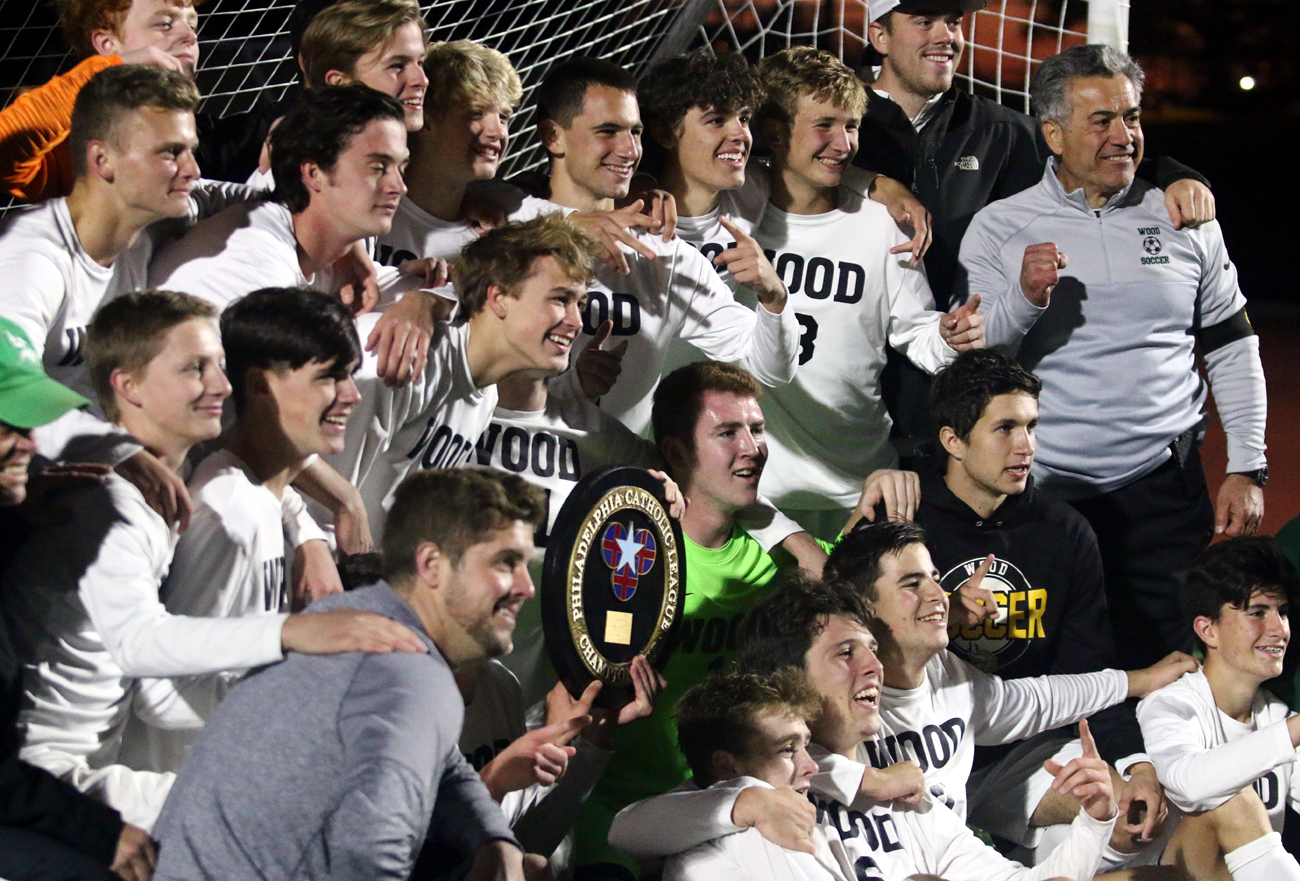 Members of the Archbishop Wood boys’ soccer team celebrate their Oct. 28 win over Roman Catholic, a victory that earned them the Catholic League championship. (Photo by Sarah Webb)

“Nerve-wracking” is another. “Nail-biting” works, too.

Oddly, though, the one person who arguably should have been the most nervous was calm as could be.

“I don’t know how to explain it,” said Archbishop Wood first-team All-Catholic senior goalie Connor Ford. “I just try to read their body and trust my instincts. They led me the past two games. I’ve been able to guess right on almost every one.”

Because of Ford’s almost psychic gift to “guess right,” Archbishop Wood was crowned the Catholic League champion after defeating Roman Catholic in penalty kicks, 4-1. After a scoreless regulation and two periods of sudden-death overtime, everything came down to players shooting at a helpless goaltender from about 11 yards away.

Four days earlier, it was the exact same situation in the semifinals versus two-time defending champion LaSalle. Against the Explorers, Ford stopped two of the first three shots and his teammates countered by netting all four of their boots.

Then he and his teammates mirrored their effort against the Cahillites, an outstanding program coached by Ray DeStephanis. Roman was participating in its fifth consecutive league final, winning in 2015 against Father Judge in, coincidentally, penalty kicks after a scoreless regulation and overtime.

“Bob (Hennessey) hits his first one . . . gets us ready,” said Ford. “Then I save it and we’re already (with an advantage) right from the very beginning. Everyone else can take a little pressure off themselves. I can loosen up, and it gets in (the opponent’s) heads, too.”

“I was ready,” said Petro. “We were all ready. We were focused.”

Petro was one of many who could not help but laud Ford for his net-minding heroics.

“Connor Ford (came) up huge with those big saves,” said Petro. “I was just blessed enough to be the last person taking it.” 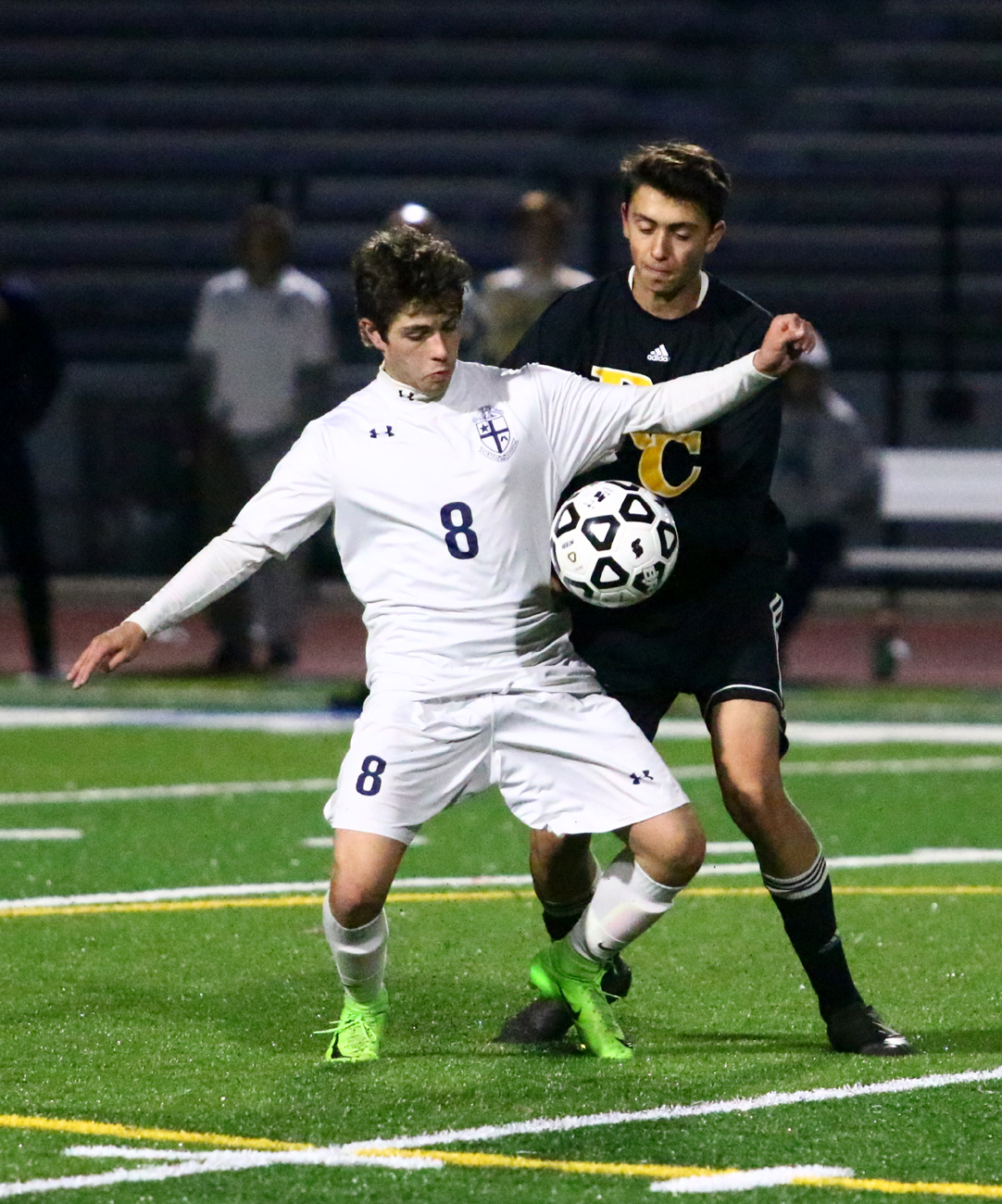 Wood senior Sean Kerchak, who played sensational defense, was asked how long the Vikings had worked to achieve their goal.

“August,” said Kerchak. “We worked even before August. When we push each other every day in practice three months straight, its just heart and wanting it more. That sums it up.

“It’s unfortunate that it came down to penalties. That’s never the greatest way to go out. It came down to the two best teams. It’s the way the PCL usually works. I’m just happy we came out on top.”

Wood coach Hugh Kelly was drenched with water during the post-game celebration courtesy of his impish teenage revelers. Despite the cold weather, Kelly didn’t mind at all.

“Typical Catholic League rivalry,” said Kelly. “Great competition. I give Roman a lot of credit. They keep coming at you. We were fortunate a couple of times. They had some chances to finish; we had a couple. We go to PKs and our goalie came up big. There’s no two ways about it. Connor did an outstanding job for us.”

“You just knew this was going to end up this way,” said DeStephanis. “It was the two best teams. I’m super proud. It’s the first time since ’97 we were the number-one seed. It was a coin flip tonight.”

Both the Vikings and Cahillites will be among the favorites to ascend through the ranks of the PIAA state tournament in the Class 5A and Class 6A, respectively.

It is doubtful that either team will be unprepared for anything that faces them – not after a Catholic League season that couldn’t be decided until play had literally stopped.