Reading the Advent season through nature 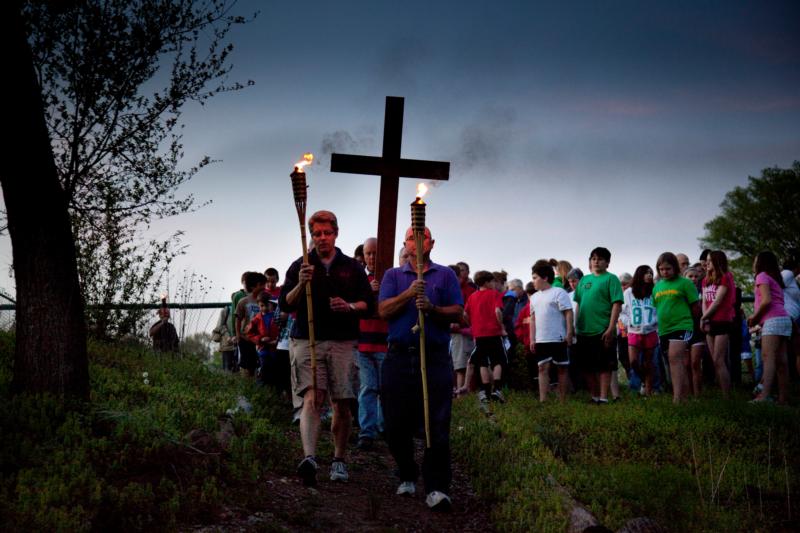 Worshippers carry a cross through a path in the woods during an outdoor procession. Advent can be celebrated by observing nature and connecting what you hear in the readings and hymns at Mass during the four weeks leading up to Christmas. (CNS photo/Lisa Johnston, St. Louis Review)

Advent is a season of expectation, of waiting for promises to be fulfilled — God’s promises, to our Israelite ancestors in the faith and to us. Isaiah promises the birth of a child named Emmanuel, “God with us.”

The prophet Malachi foretells the rising of the sun of righteousness (note those words in “Hark the Herald Angels Sing”). Zechariah prophesies that his son, John, will be the “prophet of the Most High.” In Nazareth a young virgin becomes pregnant under puzzling circumstances.

In the usual pre-Christmas frenzy Advent can too easily be swept aside, but consider: Advent is a season charged with excitement and beauty, immensely rich with imagery that conveys the power of the natural world through its liturgical texts.

I want to suggest ways in which you can celebrate Advent by observing nature and connecting what you see with the readings and hymns the church provides for us during these four precious weeks leading up to Christmas.

Two Advent weekday readings foretell the Lord’s graciousness using images of the bounty of nature. God will give us the bread and water we need, rain for the seed to sprout, abundant wheat, great streams of running water on every high mountain.

A Gospel reading picks up that theme by describing the abundant goodness of Jesus as he preaches, cures and takes pity on the people. In the Northern Hemisphere the kind of natural beauty depicted here isn’t easily seen in December, but the signs are there in subtle form if we look for them.

The most easily observable is light. The people who walk in darkness will “see a great light,” because a Son will be given whose name will be the mighty God. The “Most High” for whom John the Baptist prepares the way will visit us “like the daybreak from on high.”

In one of the O Antiphons prayed by the church during the week before Christmas, the Lord is addressed as O Radiant Dawn. Fortunately for us, Advent occurs when the days are short and the nights long, so that it’s easier to observe the dawn breaking than at midsummer, when the sun rises at 4:30 a.m.! If you’re up at sunrise, greet Jesus, the Radiant Dawn and Sun of Righteousness.

Advent is a season of tension between the already and the not-yet. Jesus has appeared on earth to inaugurate his kingdom, but he will come again at the end of time. We celebrate the present and look forward to the future.

Look closely at a tree’s bare branches and note the little buds that in spring will swell and burst into leaves — a promise of the future held inside this tiny nodule: Mary’s body pregnant with the new life of God incarnate growing within her.

Notice, too, how a pond of autumn leaves surrounded by a tentative coating of new snow reflects the already-but-not-yet of God’s kingdom. A leaf still clinging to its tree — tenacious beauty that won’t let go — is a metaphor for God who has never deserted his people and never will.

With the imagery of clouds, Advent looks pointedly toward Christ’s second coming. An antiphon tells how he will “come on the clouds of heaven with great power and might,” an image taken from the Book of Revelation. Clouds may be photogenically puffy or they may bring rain, but they are a promise of Christ’s coming.

Advent admonishes us: “Be alert!” Inspired by Scripture and liturgy, try to be alert for ways the natural world can deepen your experience of this season of waiting.

***
De Flon is editor-at-large at Paulist Press and the author of “The Joy of Praying the Psalms.”

NEXT: Four ways to be more attentive this Advent