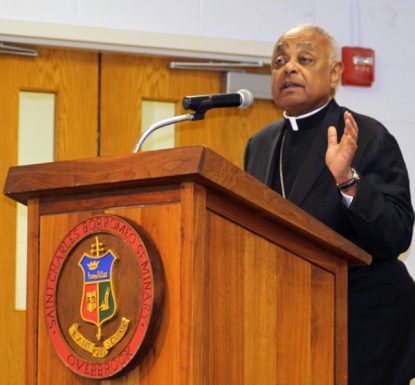 For all the gains won by the civil rights movement in the 1960s and legal protections against racial discrimination in the years since, the march toward racial equality in the United States can seem a case of one step up, two steps back.

An examination of the economic impact of racism, provided by Archbishop Wilton D. Gregory in a talk Dec. 6 at St. Charles Borromeo Seminary, showed the family finances of black and Latino households continue to fall behind white households.

Archbishop Gregory, ordained a priest for the Chicago Archdiocese in 1973 before being named to lead the Atlanta Archdiocese since 2005, spoke to a capacity Vianney Auditorium at the seminary just weeks after the U.S. Catholic bishops approved a new pastoral letter against racism Nov. 14 titled “Open Wide Our Hearts: The Enduring Call to Love.”

The archbishop did not address the letter specifically, but instead he presented evidence that African Americans suffer from racial discrimination in home ownership, lending practices and employment. He made the case that the evils of economic injustice and racism go hand in hand — and with devastating consequences.

While it is generally understood that African Americans on average have less wealth than whites, that inequality also means less opportunity for upward social mobility and fewer chances to pass accumulated wealth to the next generation, according to the archbishop, who cited data from the Federal Reserve System’s Survey of Consumer Finances for 2016.

“Redlining,” or housing segregation due to denial of mortgages based on race, was prohibited by law in 1977. But discrimination persists in the mortgage market; blacks still are less likely to be homeowners than whites, and therefore have less access to tax benefits and savings that come from home ownership.

With less money in savings, families of any background will turn to credit to meet their needs if they fall behind on bills or experience a financial emergency.

In addition to lower income and higher debt among the median African American family, Archbishop Gregory cited some two dozen academic studies from Northwestern and Harvard universities since 1989 that showed the persistence of hiring discrimination against black job applicants.

He dismissed as simplistic the Trump administration’s reliance on job creation as a “cure for America’s racial inequality” because “racism is a deeper problem than just economics,” the archbishop said.

“Jobs alone will not stamp out racism. There has been, and is, profit in racism. As a nation, we cannot address racism if we are still denying that it exists, that it doesn’t have real economic impact on people of color,” Archbishop Gregory said.

And that trend is intensifying with changes to the tax code enacted at the end of 2017, as “families with higher incomes receive increased tax incentives,” the archbishop added.

Assessing the gap in wealth between white households and those of blacks and Latinos, the archbishop cited the Institute for Policy Studies’ report, “The Road to Zero Wealth,” which showed the wealth of the median black household declined 75 percent from 1983 to 2013, while median Latino household wealth declined 50 percent. Meanwhile in the same time frame, median white household income increased 14 percent.

By 2020, median white households are projected to own 86 and 68 times more wealth than black and Latino households, respectively, according to the report.

As practical steps to correct a “racial wealth gap that leaves black people in a precarious situation (that) creates a vicious cycle of economic struggle,” the archbishop suggested only “broad, persistent policies of wealth creation can address the disparity of wealth.”

One of them is the Paycheck Fairness Act currently in Congress, which the archbishop said enjoys bipartisan support from two-thirds of all voters in surveys. It has languished in Congress for 21 years.

Discrimination in hiring must end with “equal pay for equal work,” Archbishop Gregory said, but it must begin with hiring managers becoming conscious of their own biases. “(We must) become more mindful of the stereotypes that may influence our decision-making when hiring and promoting, and ensure that personal biases don’t negatively impact those decisions.”

Responses to “persistent discrimination in housing, hiring and lending” cannot be made by policy makers, the archbishop said, “without addressing the chasm that continues to grow between the wealthiest people in American society” and those on the economic margins, especially blacks and Latinos.

At the foundation of the racist attitudes that create the economic disparities is hatred, he said.

“Hatred grows where there is ignorance. Wherever people don’t know one another, don’t have the experience of encountering one another, there is hatred.”

NEXT: At-risk adults help kids in need by stuffing their stockings with gifts