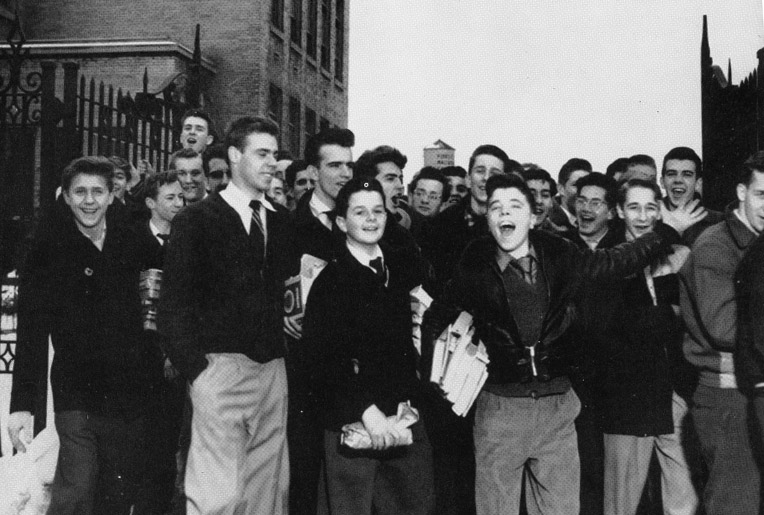 Students of North Catholic High School mug for the camera in this photograph from the 1954 school yearbook. (The Catholic Historical Research Center of the Archdiocese of Philadelphia)

Which Philadelphia archdiocesan high school has an alumni association that contributes half a million dollars a year to scholarship assistance?

It is a closed high school, Northeast Catholic High School for Boys (1925-2010). Its Northeast Catholic High School Alumni Association, through its FALCONWAY Program is currently allocating $500,000 or tuition assistance for scholarships to specified Catholic colleges, high schools and elementary schools in the Archdiocese of Philadelphia and Diocese of Trenton, also including St. Charles Borromeo Seminary and Allentown College of St. Francis de Sales.

The major catch is these scholarships are limited to children and grandchildren (but not great-grandchildren) of dues-paying members of the school’s Alumni Association. That is not a small number considering North graduated 40,000 over the years, with at least 26,000 still among the living.

This is not to be confused with the Norphans, a smaller, more recent group of North alumni that also gives school grants.

The history of the Scholarship Fund is complicated, as explained by Len Knobbs, class of 1953, who is a past president of the Alumni Association, the founding president of FALCONWAY and still its executive secretary and treasurer. 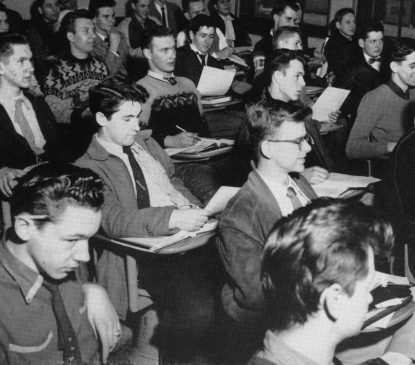 A photo from the 1954 year book of North Catholic High School shows a typical classroom scene at the school. (The Catholic Historical Research Center of the Archdiocese of Philadelphia)

It started in 1968 in that time before the Catholic elementary and high schools in the Philadelphia Archdiocese charged tuition, and the funds raised went solely to college scholarships for graduating seniors.

“We started with $2,000 the first year,” Knobbs said. “That was the first grant. We’ve increased it over the years.”

After tuition came along in the Catholic high schools, the fund shifted from college scholarships to student aid to attend North, and this became increasingly important.

Northeast Catholic peaked in enrollment the year Knobbs graduated, at 4,700 students. The next year, with the opening of Father Judge High School essentially from North’s territory, there was an obvious drop. This continued over the years, with each rise in tuition contributing to further enrollment declines.

In its final year North’s enrollment was down to 551 and the Scholarship Fund was contributing $255,000 in grants.

Ultimately the school property was sold to the Marianna Bracetti Academy Charter School for a reported $3.5 million. There is a certain irony in that when charter school legislation was under consideration in Harrisburg in the 1990s, it had the active backing of the Pennsylvania Catholic Conference in the mistaken belief that all nonpublic schools would be included, which never happened.

The new tax-supported charter schools contributed to the enrollment decline in schools such as Northeast Catholic High School.

But with the closing of their alma mater, the Alumni Association, through the Scholarship Fund, reverted to its original purpose of grants to other schools. But now it is colleges, high schools and upper grades of elementary school.

All grants are based on a combination of academic excellence and need as determined by a set formula from the application, with the final decision made by the board of directors.

The Scholarship Fund has its quirks and Knobbs is unapologetic about that. It is their money and they get to set the rules. In the first place, although the funds are sent directly to the school it is not a donation to the school but a payment toward a specified student’s tuition.

Payments for the colleges and high schools are made twice a year in eight installments at a fixed date determined by the Scholarship Fund, not the school. It will not make payments after the first payment until it receives grades directly from the school showing the student’s progress is satisfactory. 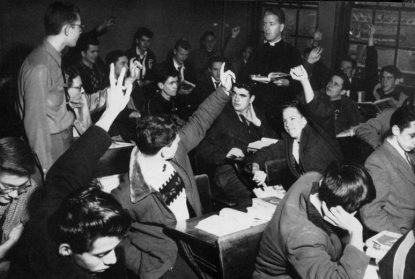 A priest faculty member of North Catholic gets an enthusiastic response from his class in this photo from the school’s 1954 yearbook. (The Catholic Historical Research Center of the Archdiocese of Philadelphia)

In the case of the elementary grades, they are paid over six payments because the students receive the grant starting at grade six. In the case of colleges, they must be co-ed apart from St. Charles Borromeo Seminary, of course.

In the case of high schools and elementary schools they must be diocesan or parish schools, not private Catholic schools. “If families can afford private schools, they don’t need our money,” Knobbs said.

Students need not be Catholic to qualify for a grant, but high schools and elementary schools must be Catholic, not just Catholic oriented. Students at such schools as the Independence Mission Schools are not eligible “because the bylaws say the school must be under the jurisdiction of the Ordinary of the Diocese,” Knobbs explained.

At this point the Scholarship Fund does have an endowment in excess of $4 million, according to the latest Charity Navigator report. Last year through tax-deductible donations and bequests it raised $279,984 for the fund, according to the alumni newsletter. This would not cover annual $500,000 grants without the addition of principal or earnings of the fund.

Some years it is higher because of bequests, Knobbs said, especially from men of the 1940s classes. Right now the top decade for donations is the 1950s, followed by the 1960s.

Northeast Catholic High School for Boys may be closed, but its faithful alumni plan to make a difference in Catholic education for years to come. 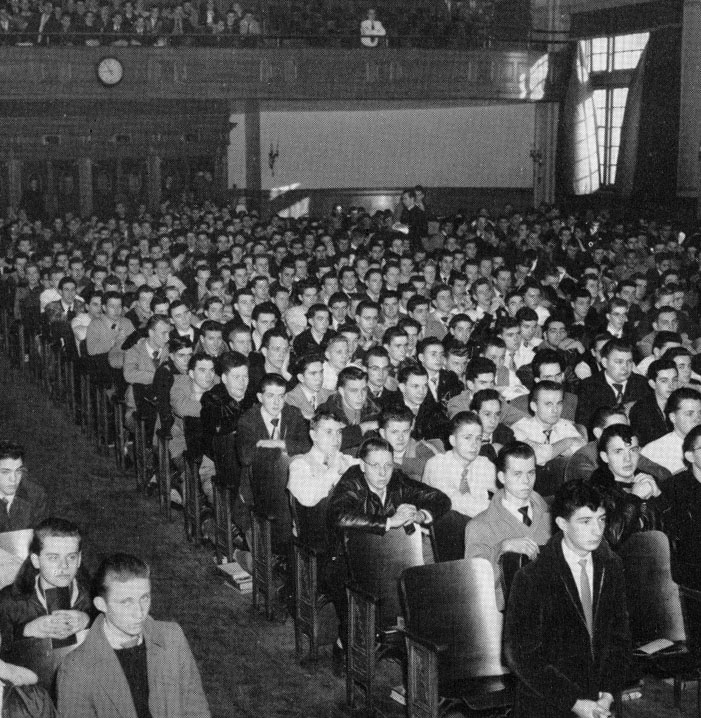 North Catholic’s auditorium is full for a Mass at the school in 1954. (The Catholic Historical Research Center of the Archdiocese of Philadelphia)

PREVIOUS: Women find support in one another through mothers’ group

NEXT: Conwell-Egan teacher inspires faith in teens through music