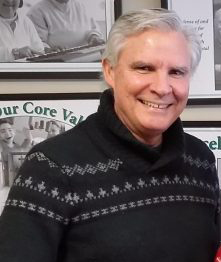 Mark Bradford has been appointed executive director of the Regina Academies, a network of Philadelphia-area schools offering Catholic classical education for students from pre-K to grade 12.

A former high school teacher, Bradford taught for ten years at St. Charles Borromeo Seminary in Wynnewood.  He then served as headmaster of a parent-founded, Catholic K-12 classical academy in western Pennsylvania.

In addition to his teaching tenures, Bradford has over 16 years of experience in nonprofit management in the areas of education, bioethics, the arts, and disability research and advocacy.

Bradford said that he is excited to be part of what he calls a “growing movement in Catholic education.”

Founded in 2003, the Regina Academies emphasize grammar, logic and rhetoric, introducing students to both Latin, classical texts and the Catechism of the Catholic Church at an early age. Currently, the academies include four schools serving approximately 450 students.

Bradford noted that he looks forward to “making the Regina movement accessible to as many families as possible.”