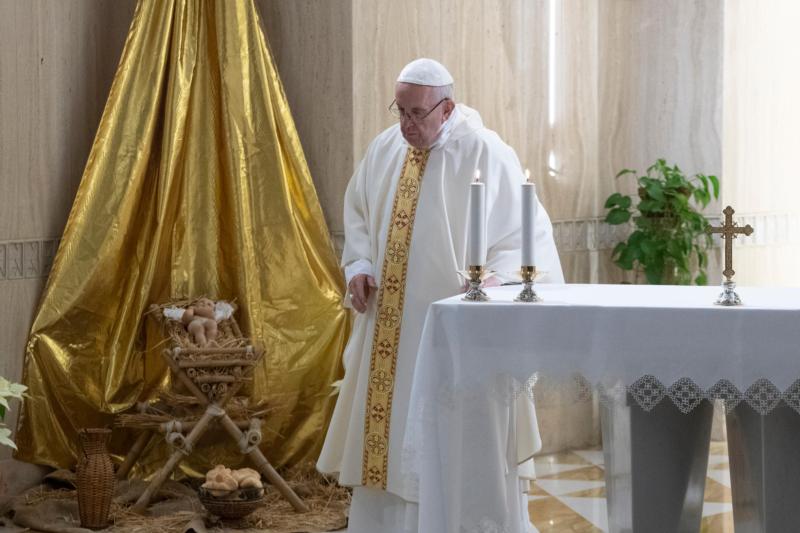 VATICAN CITY (CNS) — The saints were Christians who were “crazy for concreteness,” knowing that faith is not an idea, but a relationship with Jesus, which leads to actions that demonstrate love, Pope Francis said.

Christians profess their belief that “the son of God came in the flesh, became one of us,” he said. “He was conceived in the womb of Mary, born in Bethlehem, grew like a baby does, fled to Egypt, returned to Nazareth, learned to read with his father, to work” — although God, he was also truly human.

The first reading at Mass was a passage from the First Letter of John, which says Christians are commanded to believe in the name of Jesus and love one another, with “concrete love, not a fantasy love,” the pope said.

“Concreteness. This is the challenge,” he said. “Not ideas and beautiful words.”

The first reading at Mass also included John’s admonition: “Do not trust every spirit but test the spirits to see whether they belong to God, because many false prophets have gone out into the world.”

“The Christian life,” the pope said, “is fundamentally the concreteness of faith in Jesus Christ and in charity, but it is also ‘spiritual vigilance'” because there always will be “false prophets who propose a ‘soft’ Christ without flesh and a love for one’s neighbors that is a bit relative.”

One way to grow in the art of spiritual vigilance, he said, is to “take two, three, five minutes” at the end of each day to ask where God was at work and what God seems to be speaking to one’s heart.

The next step, he said, is to test that inspiration or inclination by consulting Scripture and a wise spiritual guide; “it’s not necessary to go to the pope or a bishop to see if what you felt is good, because there are many people — priests, religious, laity — who have this ability to help us see what is happening in our spirit so we do not err.”

Remember, the pope said at the end of his homily, Jesus became a concrete human being, “born of a concrete woman, he lived a concrete life, his death was a concrete death, and he asks us to love our brothers and sisters concretely, even if some of them are not easy to love.”

PREVIOUS: Ten pockets of prayer for the new year

NEXT: Love means never turning away from someone in need, pope says