Love means never turning away from someone in need, pope says 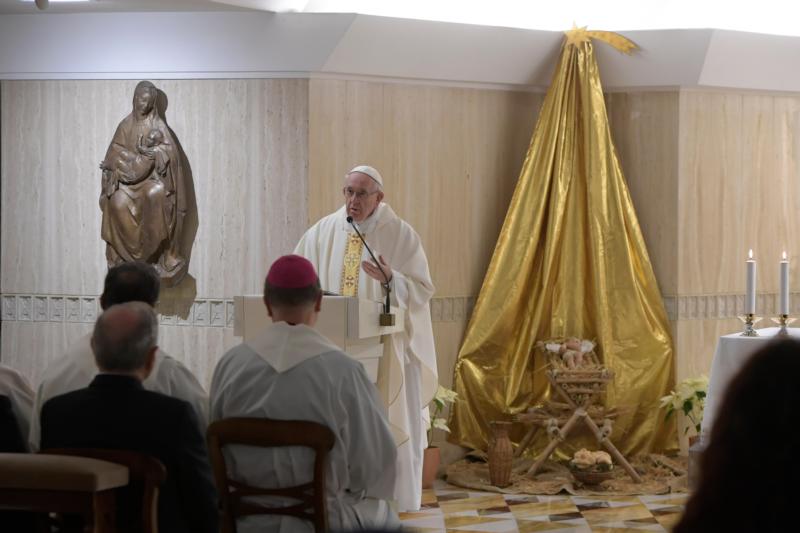 Pope Francis delivers the homily as he celebrates morning Mass in the chapel of his residence, the Domus Sanctae Marthae, at the Vatican Jan. 8. (CNS photo/Vatican Media)

VATICAN CITY (CNS) — Loving means putting your heart into play, willing to experience compassion and to be moved to action, Pope Francis said.

“The most common opposite to love of God, to the compassion of God, is indifference,” the pope said Jan. 8 during morning Mass in the Domus Sanctae Marthae where he lives.

Indifference, he said, is telling oneself, “I’m satisfied. I don’t need anything. I have everything, I’ve got a guarantee for this life and eternal life because I go to Mass every Sunday and I’m a good Christian,” but then turning one’s eyes away from a homeless person begging on the street.

Every Christian is called to try to reflect God’s love and compassion in the world, he said. “Think about this: God takes the first step, he has compassion and mercy, but many times our attitude is indifference.”

Pope Francis prayed in his homily that God would “heal humanity, beginning with us, that our hearts would be healed of this illness that is the culture of indifference.”

Learning to love like Jesus did is a process, the pope said, citing the example of the disciples from the day’s Gospel reading about the miraculous multiplication of loaves and fishes.

The reading from Mark 6, includes the disciples telling Jesus it is getting late and he should tell the crowd to disperse and go find food for their dinner. But Jesus tells the disciples, “Give them some food yourselves.”

Pope Francis described the scene on the hillside where Jesus was teaching the crowd and he imagined the disciples got bored “because Jesus always said the same things.”

So, while Jesus was speaking with “love and compassion,” the disciples started talking among themselves about how late it was and how Jesus should tell the crowd to go find some food. The disciples, he said, probably had “enough food for themselves and wanted to save it,” and they thought the people should “fend for themselves.”

It was not until they had betrayed Jesus, abandoned him and yet were forgiven by him that they finally understood “the core of compassion and mercy,” he said.

NEXT: When should the Advent wreath be removed from church?