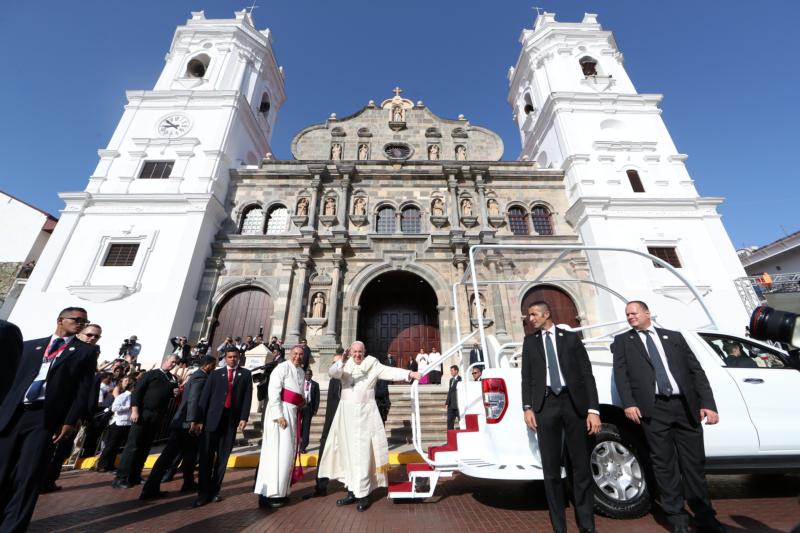 Pope Francis arrives for Mass and the dedication of the altar of the Cathedral Basilica of Santa Maria la Antigua in Panama City Jan. 26, 2019. (CNS photo/Alessandro Bianchi, Reuters)

PANAMA CITY (CNS) — A church wounded by sin can paralyze, confuse and tire the hearts of Catholic clergy and laypeople, causing them to doubt their mission in the modern world, Pope Francis said.

Celebrating Mass at the Cathedral Basilica of Santa Maria La Antigua Jan. 26 with priests, consecrated men and women and members of lay movements, the pope warned that the burdens and troubles in the church can lead to a “weariness of hope” that “calls into question the energy, resources and viability of our mission in this changing and challenging world.”

“The weariness of hope comes from seeing a church wounded by sin, which so often failed to hear all those cries that echoed the cry of the Master: ‘My God, why have you forsaken me?'” he said.

Thousands of pilgrims and Panamanians waited outside — some camped outside since 4 a.m. — cheering loudly as the bells of the cathedral hailed Pope Francis’ arrival.

Upon entering the 220-year-old church, the pope was greeted with applause by those present, including President Juan Carlos Varela of Panama and his wife, Lorena Castillo.

The pope then spent several minutes praying before a statue of Santa Maria La Antigua, patroness of Panama. The original image, which depicts Mary holding baby Jesus in her arms and carrying a rose, was first brought into the country by Spanish conquistadors in 1510.

During the Mass, Pope Francis consecrated the altar of the newly renovated cathedral. Removing his chasuble and rolling up his left sleeve, he poured chrism oil and anointed the altar.

According to World Youth Day officials, the Cathedral Basilica of Santa Maria La Antigua is the first cathedral in the Americas to have an altar consecrated by a pope.

In his homily, the pope reflected on the reading from St. John’s Gospel in which Christ, weary from a journey, asks a Samaritan woman for a drink of water.

While many in the church seek to announce the Good News as Jesus did, he said, “we do not always know how to contemplate and accompany his weariness; it seems this is not something proper to God.”

“The Lord knew what it was to be tired, and in his weariness so many struggles of our nations and peoples, our communities and all who are weary and heavily burdened can find a place,” the pope said.

While priests, laity and consecrated men and women can experience physical weariness due to long work hours or “toxic working conditions and relationships,” there is also another “subtle weariness” that “seems to have found a place in our communities.”

This weariness of hope, he added, can lead to a “gray pragmatism” that pierces the heart of the church, making it seem that while “everything apparently goes on as usual, in reality, faith is crumbling and failing.”

“Disappointed by a reality that we do not understand or that we think has no room for our message, we can open the door to one of the worst heresies possible in our time,” the pope warned.

It is “the notion that the Lord and our communities have nothing to say or contribute in the new world now being born,” he said. “What once arose to be the salt and light for the world ends up stale and worn.”

Christians need to quench their parched hope by returning to the “deep well of our first love, when Jesus passed our way, gazed at us with mercy and asked us to follow him.”

A wearied hope can be healed, he said, when people are not afraid to let their heart “return to the place of its first love and to find, in the peripheries and challenges before us today, the same song, the same gaze that inspired the song and the gaze of those who have gone before us.” 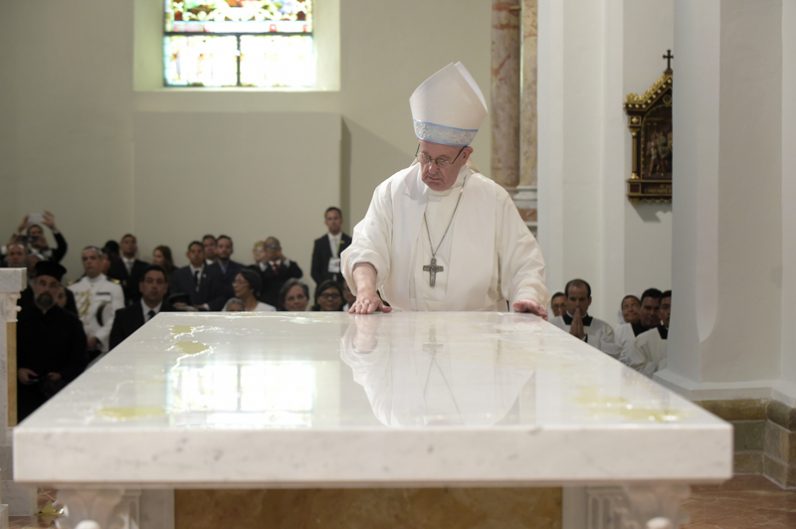 PREVIOUS: The Lord’s Prayer and the sign of peace at Mass

NEXT: Gut it, rebuild it: Renovations for the way home