How lay people can make the Word of God come alive 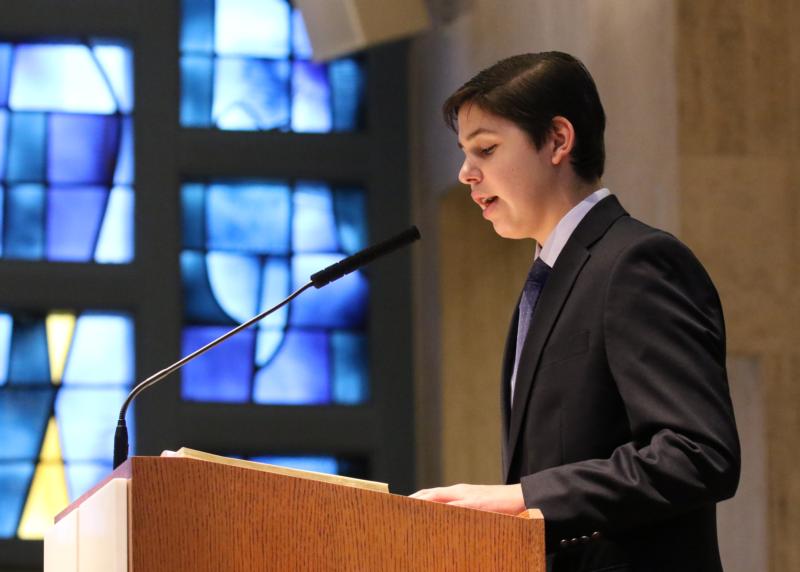 Lector Keith DeStaebler reads during Mass at St. Anne Church in Garden City, N.Y. With the promulgation of the Second Vatican Council’s Constitution on the Sacred Liturgy, two readings in English, along with the responsorial psalm were to be read at Sunday Mass, and laypeople were now allowed to proclaim those readings. (CNS photo/Gregory A. Shemitz)

I began my service as a lector in 1965 when I was 12 years old. Only a few months before (on Nov. 29, 1964), Masses were celebrated in English for the first time in the United States. So, you could say that I got my start on the ground floor.

Prior to the Second Vatican Council, the readings at Mass were done only by the priest, who would read the epistle and Gospel first in Latin, and then usually reread the Gospel in English. On more solemn occasions, the epistle would sometimes be read chanted by a man who had received the order of lector, one of the steps required for priestly ordination.

With the promulgation of Vatican II’s Constitution on the Liturgy (“Sacrosanctum Concilium,” Dec. 4, 1963), two readings in English, along with the responsorial psalm, were to be read at Sunday Mass, and lay people — men and women — were now allowed to proclaim those readings.

At St. Clement Parish School in the Archdiocese of Louisville, Kentucky, we went to Mass two or three times a week and I was chosen to “be a reader” for one of those school Masses. I don’t remember the occasion, but I can still recall the special sense of honor I felt in reading the word of God aloud in public.

After more than 50 years serving in this ministry I can say that I feel that same sense of honor each time I proclaim God’s word.

From them I learned the importance of proclaiming words slowly and carefully — so that each could be understood by everyone — but also with power and passion so that the words would come alive in the minds of those who heard them. These were all valuable lessons to learn.

After I decided to leave the seminary, I continued to serve as a lector whenever I could. Over the years I have also served as an extraordinary minister of holy Communion and as a cantor leading the congregation in song, but proclaiming the word remains my first love.

Each week, whether I’m scheduled to lector or not, I prepare for Sunday Mass by reading and reflecting on the two readings, responsorial psalm and Gospel. I often read the words aloud to get a feel for them and to see how they sound in my head.

Do they come lightly off of my tongue or do I stumble over them? Proclaiming the writings of St. Paul so they can be understood by the congregation can be difficult because of the many tongue twisters found there.

When I’m unfamiliar with a word or unsure of how a word should be pronounced, I look it up and then practice saying it aloud until I feel comfortable.

Next, I try to understand how the reading fits into the broader New or Old Testament reading from which it is taken. Knowing the context of a passage — for example, whether it is part of an introductory section or taken from the main body of the text — can make a difference in its meaning and how it should be read aloud.

Only when I feel confident with the Old and New Testament readings do I move on to the Gospel to see how the readings fit together.

One Saturday night after Mass when I had served as lector, I was standing in line at a fast-food restaurant waiting to order. A person whom I recognized from the parish but did not know came up to me and thanked me for making the readings come alive for them. That’s my goal each time I lector: not to be thanked, but to make the readings come alive for those who hear me.

PREVIOUS: Week-long work goes into homily prep for, and with, parishioners

NEXT: In Mass, Word of God comes through clergy and people