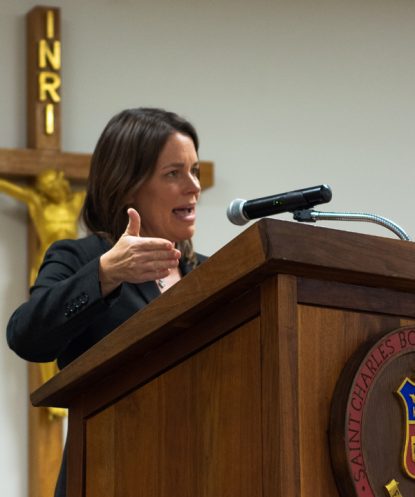 Kim Daniels delivers the Cardinal Foley lecture Jan. 28 at St. Charles Borromeo Seminary, Wynnewood. She charted how the church can go forward from anger to renewal in the wake of the sexual abuse crisis through substantive measures and effective communication. (Photo by Dominic Mirenda)

“Changes of heart and mind and culture” are needed to move the Catholic Church from anger over the clergy sexual abuse crisis to justice, reform and personal renewal among the faithful.

That was the assessment of Kim Daniels, speaking on “From Anger to Renewal: Communications and the Crisis in the Church” Jan. 28 at St. Charles Borromeo Seminary in Wynnewood.

Daniels, the associate director of Georgetown University’s Initiative on Catholic Social Thought and Public Life, shared her thoughts as part of the Cardinal Foley lecture, an annual talk sponsored by the seminary in honor of the late Cardinal John P. Foley.

Rebuilding the credibility and trust in the church will also require careful thought as to how reforms are communicated to both Catholics and non-Catholics, said Daniels, who is one of only three lay members of the Vatican Dicastery for Communication.

Throughout the evening, Daniels – who also holds a law degree from the University of Chicago — applied her extensive background in public communications to assessing the church’s current global crisis, one of the most serious in its long history.

Substance drives communications, she said, and not the other way around.

“The clerical abuse crisis faced by the church does not spring from poor public relations strategies or a failure of messaging, and it won’t be resolved by slick websites, clever media strategies, or just the right turn of phrase,” Daniels said. “Church leaders have hurt real people, and real reform is necessary.”

Both the victims of abuse and rank-and-file Catholics have suffered, she said, adding that another casualty has been the loss of credibility of the church to speak and teach on any topic.

Daniels cited a January 2019 poll by Gallup showing “a record-low 31 percent of U.S. Catholics rate the honesty and ethical standards of the clergy” highly.

This decline in confidence follows “steep declines in trust” in the aftermath of earlier waves of scandal to hit the church in the United States: first publicly in the 1980s; again in the 1990s; then again with the Boston Globe’s spotlight on clergy abuse and the U.S. bishops’ responses in 2002.

Similar reports of scandal emerged in at least eight other countries.

The way to strengthen confidence in church leadership, according to Daniels, is to study Pope Francis’ prescriptions in his Jan. 1 letter to the American bishops.

The pope called for “a commitment to mission, to unity, to human dignity, to service, and above all a recognition that we’re all in this together,” and this awareness should “root our prayer, our practical response, and our communication about the clerical abuse crisis,” Daniels said.

Daniels directly quoted Pope Francis, who wrote that “credibility is born of trust, and trust is born of sincere, daily, humble and generous service to all, but especially to those dearest to the Lord’s heart.

“The catholicity of the church cannot be reduced merely to a question of doctrine or law; rather, it reminds us that we are not solitary pilgrims: If one member suffers, all suffer together.”

The victims of sexual abuse must be the top priority as the church formulates its responses to the crisis, Daniels said.

She sees signs that will be the case at the upcoming global Meeting on the Protection of Minors in the Church. Scheduled to take place at the Vatican from Feb. 21-24, the gathering will include the heads of the world’s national bishops’ conferences and other church leaders with child protection experience.

Daniels regards improvements in bishop accountability and increased transparency as “necessary elements of a path forward.”

She said that lay people, who have “no time for passivity,” do play a role in ensuring reform. However, she stressed that “real accountability for bishops will only take hold when we take steps to end the culture of clericalism that has too often led clerics to cover up grave moral failures.”

“Clericalism simply has no place in the church,” Daniels said.

Bishops themselves must demonstrate “real leadership,” showing through their words and actions “that they understand the harm that has been done, the trust that has been lost, and the changes that are needed,” she said.

A commitment to transparency is critical to reform.

“We need honesty and candor from our bishops,” Daniels said, citing Catholic commentator Russell Shaw’s observation that “openness and candor would not have prevented the scandal (but) they would have made it a lot less traumatic than it turned out to be.”

After praising secular and Catholic journalists for revealing the extent of the crisis over the years, Daniels laid out a multi-point strategy for the church to communicate its reform measures, even if a noisy media environment makes the task akin to “whispering in a hurricane.”

The approach, said Daniels, should begin with truthfulness, center on victims, and stay rooted in “humility, sorrow and repentance,” while showing others that “we live God’s call to mercy.”

In addition, the response should be pastoral, rather than reliant on legal risk managements. Positive, consistent actions should counter the temptation to “advance narrow ideological or ecclesial agendas.”

The Cardinal Foley lecture is one of a series of events each year sponsored by the John Cardinal Foley Chair of Homiletics and Social Communications, held by Oblate Father Thomas Dailey. The events bring focus on the life’s work of the late cardinal — a Philadelphia priest, seminary professor, editor of The Catholic Standard and Times and president of the Pontifical Council on Social Communications. 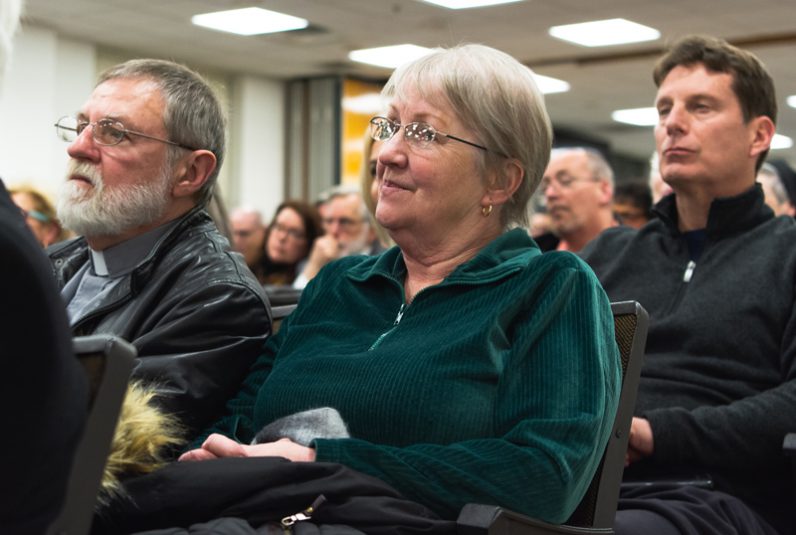 Guests at St. Charles Borromeo Seminary, Wynnewood, listen to Kim Daniels deliver the 2019 Cardinal Foley lecture Jan. 28 on the topic, “From Anger to Renewal: Communications and the Crisis in the Church.” (Photo by Dominic Mirenda)