Most of the 160-member Pro-Life Club of Bishop Shanahan High School prepare to depart their school in Downingtown for the annual March for Life Jan. 18 in Washington, D.C. The archdiocesan Catholic school was named National High School of the Year by Students for Life of America.

Many good things happened in Washington, D.C., surrounding the Jan. 18 March for Life, although mainstream media focused on an incident where a group of kids from Covington, Kentucky were thrown under the bus.

A local positive example happened the next day when the students from Bishop Shanahan High School in Downingtown accepted the National High School of the Year award from Students for Life of America (SFLA). That’s quite an honor considering SFLA has more than 1,200 high school and college chapters nationwide.

Along with the award the Shanahan SFLA group received $1,000 to assist it in its mission.

“This is an amazing group and they are working really hard to impact the culture of their school,” said Liana Hollendonner, the Mid-Atlantic regional coordinator for SFLA. “They are positive and articulate.”

Probably no one knows that better than Joe Aquilante, a theology teacher at Shanahan for 21 years and moderator of the school’s pro-life group for the past 18 years. At this time there are about 160 students in the SFLA Chapter. 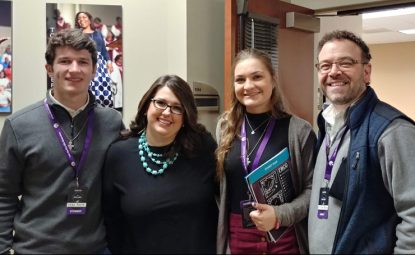 Bishop Shanahan theology teacher and Pro-Life Club moderator Joe Aquilante, right, shares a moment with students Michael Prieto (left) and Mary Taylor (third from left) during a Jan. 19 conference with Students for Life of America, which named Shanahan National High School of the Year for its pro-life efforts.

“My job is to take the gifts of the kids and help them to develop them,” he said. “The leadership of this year has been fostered by past leaders. Students for Life has energized youth in a way nothing else has. The younger generation is getting involved, fighting for life.”

Mary Taylor, a senior and president of SFLA at Shanahan, is only in her second year at the school.

“I’ve always been pro-life,” she said, adding at her previous public high school she was in the minority but that is not the case at Shanahan. “I was raised Catholic and know killing anyone is wrong,” she said.

(Below, Bishop Shanahan High School’s Pro-Life Club gives an enthusiastic witness to the sanctity of human life at the March for Life Jan. 18 in Washington, D.C.)

Over the years she has heard about girls getting an abortion but never really personally knew one who did.

Mary personally believes it is her generation that will end abortion or at least overturn Roe v. Wade as national law and return it to the states, and the more permissive laws passed in New York and proposed elsewhere are a sign others believe this too.

The strength of the pro-life movement at Shanahan was really exhibited during the March for Life.

“We had three buses that went,” Mary said. “We probably could have had a fourth. I was really surprised by the number of people who wanted to go.”

During their time in Washington, “we didn’t have any problems at all,” she said. “I feel awful about what happened to the kids (from Covington) and it was really unfair. I saw the one boy on television, and he was so respectful.”

Michael Prieto, also a senior, is vice president of SFLA at Shanahan and has been a member since his freshman year.

“I’ve always felt a call to protect those who can’t protect themselves,” he said. “The Pro-Life Club is a great way to do this. The pro-life movement is definitely huge in our school. I think most of the kids understand what we are trying to do.”

Even outside of the school Michael has not experienced much opposition, other than counter protestors at times when members give witness outside abortion clinics.

“But I was very surprised when we were chosen as National High School of the Year,” Michael said. “It shows people are recognizing what we are doing here.”

At this time all of the archdiocesan high schools have SFLA groups. Others that sent delegates to the meeting in Maryland include John W. Hallahan, West Catholic Prep, St. Hubert and Cardinal O’Hara. 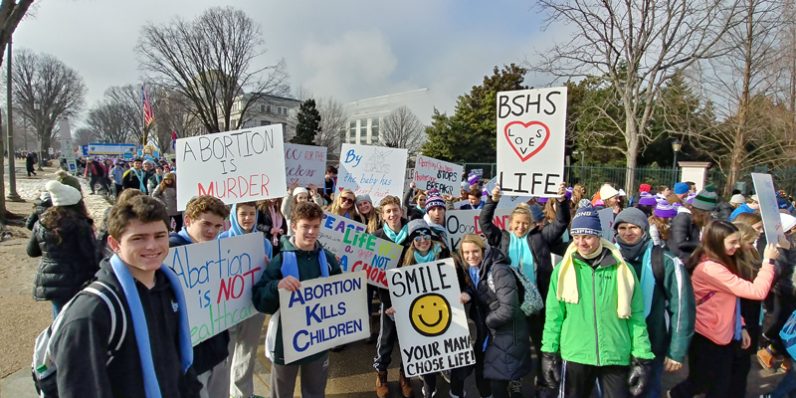 The Bishop Shanahan High School contingent shows their enthusiasm on the streets of Washington, D.C., at the Jan. 18 March for Life.

NEXT: Young adults on retreat pause for prayer, study of church reformers