Panel explores theology and God’s promise of land in Israel 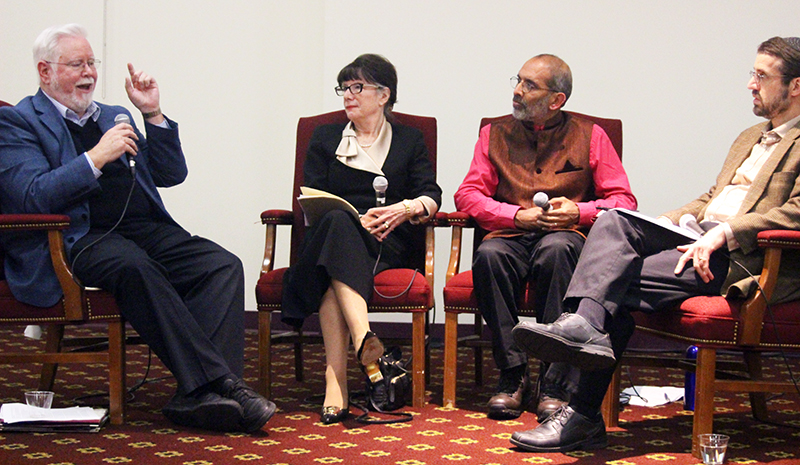 Twenty scholars from nine countries convened at the St. Raphaela Center in Haverford earlier this month to study major issues in Christian-Jewish relations.

“Participants in Fulfilling the Promise of a New Relationship,” which took place Jan. 7-10, was the first international roundtable hosted by the Institute for Jewish-Catholic Relations (IJCR) of St. Joseph’s University. Founded in 1967, the IJCR is the oldest university center of its kind in the U.S. created in response to the Second Vatican Council’s call for increased interfaith dialogue.

Academics shared their insights on Jewish and Christian missions, religious identity and national borders, covenantal theology and the connections between Christian-Jewish relations and global religious pluralism.

Adam Gregerman, the IJCR’s assistant director and assistant professor of Jewish studies, said the event had united “a great gathering of scholars.”

A public session of the conference was offered on Jan. 8 at the university’s Campion Student Center. Gavin D’Acosta of the University of Bristol presented his research on “Catholic Theology and the Promise of the Land as Part of the Jewish Covenant.”

Likening his argument to a “dance” with the session’s 60-member audience, D’Acosta drew on Vatican documents and Scripture to lead participants step by step to “good but tentative grounds” for what he described as a “Catholic minimalist Zionism.”

D’Acosta first qualified his use of the term “Zionism,” which is generally understood as a nationalist movement to establish a Jewish national state in the ancient homeland of the Jews. Rooted in the enduring relationship between the Jewish faith and the covenantal land promised by God, the movement formally emerged in eastern and central Europe in the late 19th century, and ultimately led to the founding of the modern state of Israel in 1948.

An adviser to the Pontifical Council for Interreligious Dialogue, D’Acosta said  his use of the term specifically referred to the “connection between the biblical promise of land and Israel’s creation in 1948.” Clarifying the distinction between Eretz Yisrael (the land promised to the Jews) and Medinat Yisrael (the democratic state of Israel), D’Acosta further noted that his research did not support any particular government or set of borders. He also upheld the Vatican’s endorsement of a two-state solution in response to the Israeli-Palestinian conflict.

At the same time, D’Acosta said, “the history of Israel did not end in 70 A.D.” when Jerusalem fell to the Romans, who massacred its inhabitants and destroyed the Second Temple. D’Acosta invited Christians to understand the complex relationship between the Jewish people and the land, “without making their own particular religious interpretation.”

Following the presentation, Amy-Jill Levine of Vanderbilt University’s Divinity School offered a response to D’Acosta’s work. Complimenting D’Acosta’s dance analogy, Levine said that “good ballroom dancing was a bit of give and take,” and could become a “tango or a tangle.”

Citing numerous Hebrew and New Testament Scriptures, Levine provided her “additional steps,” affirming the rights of Palestinians and challenging the audience to “understand how Jews today think of themselves.” Levine urged listeners to look carefully at the context of Scriptural texts and to “appreciate Jews, not just Israel.”

“There is a need to understand and recognize Jesus as a Jew,” she added.

“I liked both the questions and the answers,” said Hyman, a non-denominational Christian who was raised as a Baptist. “The session got my juices flowing, my creativity and thinking.”

Such energetic, collaborative inquiry was evident among the scholars who participated in the conference.

“I am happy to join the dance,” said Levine. “And I welcome everyone as well.”