After jumping to a 3-0 start for only the third time in its 56-year history, McDevitt lost to La Salle. Two days later on Jan. 6 against Cardinal O’Hara, the Lancers quickly recovered from their defeat with a 73-68 victory.

At 4-1 in the league, the Lancers are one of eight teams with one loss or fewer. Although their perch is rare, they aren’t looking for plaudits just yet.

“Our team is at this stage right now because of our hard work and dedication,” said junior Robert Smith. “Over the summer we were working non-stop. We just have to take it one game at time and focus and stay positive.”

McDevitt’s initial three victories ended significant losing streaks. The 62-58 win over Archbishop Wood severed a 13-game slide; the 57-52 triumph over Archbishop Carroll stopped a 12-game run; and the 53-38 success against St. Joseph’s Prep was its first in five seasons.

Although losing to La Salle could have stalled their momentum, the Lancers survived their first “mettle” test with the win over visiting O’Hara, improving their overall mark to a blistering 10-1. Smith’s 19 points were supported by junior Jamil Manigo’s 24 and junior Shamir Mosley’s 10.

“It feels good to have a good start in the PCL especially after going 8-0 last year in non-league before the PCL started, then losing two out of the first four games,” said Chavis. “I think that was a wake-up call and an introduction for the players and staff as to how good the PCL is as a league.

“So we went back to work and put a focus on getting better so we will be able to compete in the league. I think the players responded well. Last year left a bad taste in their mouths because we worked really hard and came up short in a lot of games.

“It was great experience for a young group, which I think really helped us to understand what it takes to make people believe in their talents and win some games,” added Chavis. “We have a talented group of basketball players as well as good-character kids, something we talk about with the kids a lot.”

The early-season “game of the year” occurred Jan. 6 when senior reigning Most Valuable Player Isaiah Wong nailed a bank shot with five seconds remaining to lift Bonner-Prendergast to a scintillating 59-58 victory over defending champion Roman Catholic in front of a sold-out crowd.

“We knew we had to come out strong from the jump,” said Bonner senior Tariq Ingraham. “We knew how dominant Roman can be when you give them confidence from the start, so we couldn’t let that happen.

“To keep this winning streak going, we gotta play every game like we’re playing Roman.” 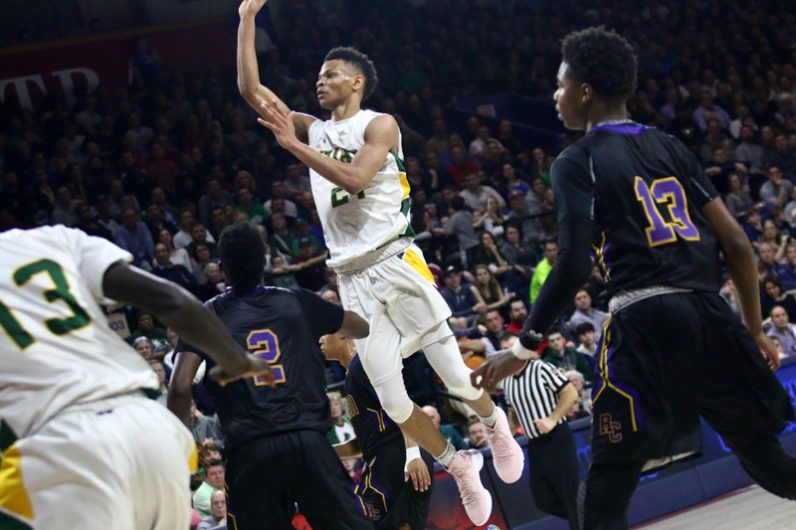