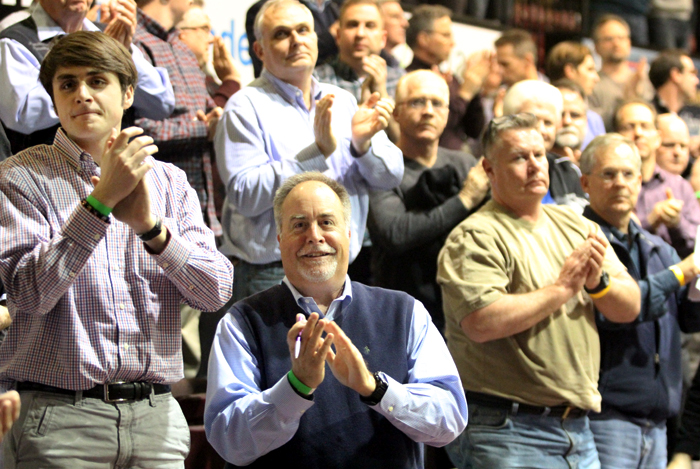 If it’s March, it must be spring (at least in the Northern Hemisphere). Spring is a traditional time of renewal both botanically and spiritually, and for Catholic men in the Philadelphia area, part of that renewal is the annual Man Up Philly Catholic Men’s Conference, now in its 11th year.

This year’s conference will take place on Saturday, March 9 at Neumann University’s Mirenda Center in Aston.

Man Up Philly is an outgrowth of a modest Sunday morning men’s Gospel reflection group begun in 2002 by local businessman Eustace Mita, which has since spread to more than 50 parishes. Out of this grew Man Up Philly, a one-day spiritual renewal, begun in 2009 and from its beginnings markedly successful.

Last year’s conference, which was also held at the Mirenda Center, attracted 1,300 men and boys.

The idea of the conference is to energize and enable men to be better sons, fathers and husbands living their faith.

The format is relatively simple. It consists of a day of spiritual reflections given by nationally known presenters, opportunities for the sacrament of reconciliation and Mass.

This year’s program begins with 7:30 a.m. registration. After a musical interlude Bishop Timothy Senior will offer Morning Prayer and Mita will give a short address.

(Watch a promotional video for Man Up Philly below:)

The first speaker will be Deacon Harold Burke-Sivers, a nationally known Catholic author, radio and television host especially on EWTN and Radio Maria.

He will be followed by Matthew Kelly, the founder of the Dynamic Church Institute, which has a mission to “reenergize the Church in America.”

Following Kelly there will be lunch and ample opportunity for confessions with a number of priests from throughout the Archdiocese of Philadelphia serving as volunteer confessors.

Every year the program also features a speaker who is well known outside of the field of religion but nevertheless has an inspirational message on the role faith plays in his or her life.

In the past this has included such sports figures as Rich Gannon, Phil Martelli and Fran Dunphy, as well as Philadelphia Police Commissioner Charles Ramsey and Camden Police Chief J. Scott Thompson.

This year the speaker will be former Philadelphia Eagles great Ron Jaworski.

He will be followed by a talk from Father Steve DeLacy and Deacon Michael Pascarella on religious vocations.

The final event will be a concluding Mass celebrated by Bishop Senior.

Tickets for Man Up Philly 2019 can be ordered at manupphilly.com.

NEXT: Ordained as Christ’s priests, they walked where he walked