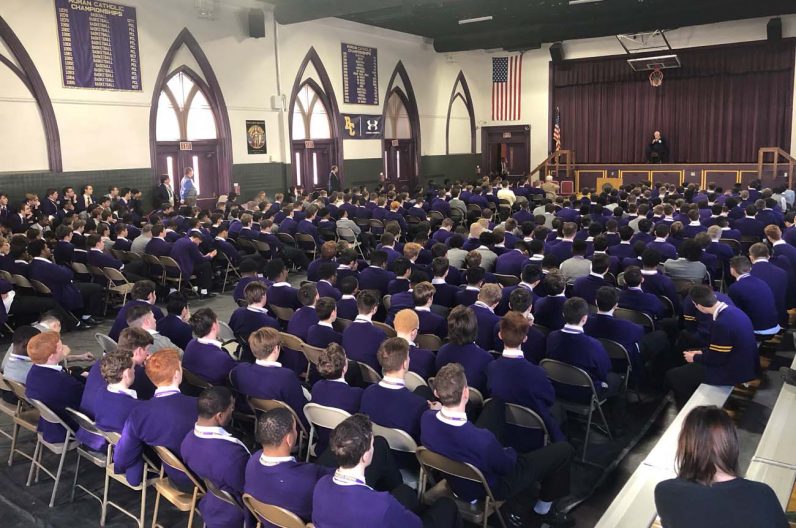 Dr. Roberto Canessa speaks to the riveted junior class of Roman Catholic High School, Philadelphia, during his visit to the school Feb. 21.

Dr. Roberto Canessa, a distinguished pediatric surgeon and author from Uruguay, visited Roman Catholic High School Feb. 21 to share first with select history classes and then the entire junior class an account of a horrific life-altering experience he had when he was not much older than they are now.

This experience, he maintains, reinforced his ambition to save lives. But he had already saved lives in a dramatic fashion. It’s all part of a recent book he wrote; “I Had to Survive: How a Plane Crash in the Andes Inspired My Calling to Save Lives.”

Fundamentally, the story was all about instances, where an action that seems intrinsically wrong if not down-right evil is justified given special circumstances. Governments do this all the time, of course, when they send young men (and women) into war to kill others for what they perceive to be a just cause.

Dr. Canessa and his friends killed no one, but they did break an almost inviolable taboo and saved their lives by doing so. He also lived to continue to save many other lives as a physician.

Here’s the backstory. In October 1972, Canessa was a 19-year-old medical school student and a member of the Old Christians Club rugby team in Montevideo, Uruguay. The team chartered a Uruguayan Airforce plane to fly them through Argentina to Santiago, Chile, just over 1,000 miles away. Their flight should have taken around five hours. Their Fairchild FH 2270 would have to thread its ways through lower sections of the mighty Andes because it was not built to fly over the highest peaks. 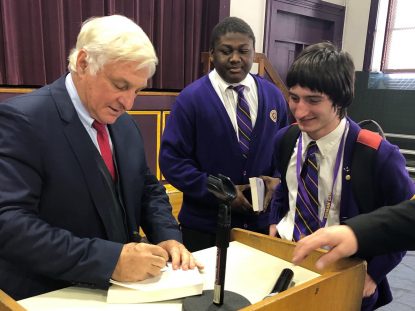 Dr. Roberto Canessa signs copies of his book for Roman Catholic students during his visit to the archdiocesan high school
Feb. 21.

There was a minor glitch when weather conditions forced the plane to lay over at Mendoza, Argentina just 229 miles from their destination. The next day, Friday, Oct. 13 while in the air about an hour, the pilot at the controls notified air traffic control that they cleared the mountains and were given instructions to start their descent. In fact this was a serious navigation error.

They were still traversing very high mountains in Argentina, and this was only realized when it was too late. After a failed attempt to climb they crashed into a remote glacier high in the mountains. Although the wings and tail were sheared off the plane, most of the cabin was relatively intact. Of the 45 people on board 17, including the pilot, co-pilot and crew, were killed immediately or died from injuries shortly after.

Canessa still remembers as the crash alarm sounded, he instinctively prayed the Hail Mary and after the crash immediately assisted the injured.

Although October is early spring in South America, on a high mountain glacier there was eternal winter, without any vegetation or animal life whatsoever, and they were ill clad for the constant freezing temperatures. Because there was no electricity there was no way to radio for assistance.

Canessa thought of his mother, remembering when a young man had died in his town he heard her say it would kill her if one of her children died. He would stay alive for her sake.

Food was the biggest problem. Because it was to be a short flight very little was on board, just snacks and that were soon exhausted. They knew there was search and rescue going on because they had one transistor radio, but after six days, they heard the heartbreaking news the search was called off and they were presumed dead.

They had seen search planes high overhead but they were missed probably because the white of their plane blended into the snowy background. Contributing to this of course was the wrong location information given to air traffic control before the crash.

Meanwhile they were literally starving to death. A suggestion was made and argued over: Eating the flesh from the frozen bodies of the dead was their only hope.

“I went out into the snow and prayed to God for guidance,” Canessa recalled. “Without his consent I felt I would be violating the memory of my friends.”

When he made his decision in favor of surviving by eating the dead, he told his companions and added that if he died they should eat him. One rationale the group used was they were imitating Christ at the Last Supper when he told his followers to eat his flesh.

Finally a majority agreed it was only thing to do.

The first to be consumed were the pilots, because they were not their friends, but others would follow. Using a piece of glass from the wreckage Canessa carved off a strip of flesh and ate it and others did the same.

With the starvation problem at least temporarily alleviated, there were other hardships.

In addition to the freezing temperatures, during the third week of their ordeal a sudden avalanche buried the plane cabin where they were huddled, and eight more of their companions died. Others would also die, and the living found consolation that for the dead, their ordeal was over.

From time to time hardier members of the group would explore a possible way out, without success.

Finally after two months, with just 16 survivors left and the temperature just slightly less severe, Canessa joined with Nando Parrado and another companion on a desperate search for help. Soon the third man had to turn back.

Canessa and Parrado first climbed to the summit, where surrounded by mountains they realized they were not at the border of the mountain chain and would have to go farther. They were nevertheless determined to reach help or die trying.

It was not easy because by this time they had lost half their body weight and were much weakened. It took them 10 days to walk 40 miles, slowly descending the rugged terrain. After coming across vegetation they encountered herdsmen who brought them to civilization.

By following their description of the site, helicopters were sent back to rescue their 14 other still-living companions.

Now it is 46 years later and Canessa is still telling his story of hardship, the difficult decision, the test of endurance and faith. Of his group of 16 survivors only one has since died. They, like himself, are fathers and grandfathers now and still keep in touch.

As for the students at Roman Catholic, Canessa’s account was a first-person lesson they will never forget.

“Canessa’s survival story made me realize just how important it is to never take what I have for granted,” said Michael Caimi, a junior. “It could all vanish in the blink of an eye.”

Alexander Wajda, also a junior, thought it was a visit none of the students will soon forget.

“After reading his book, ‘I Had to Survive,’ we learned of his struggles in the Andes Mountains and his life as a pediatric cardiologist, but this first-hand experience allowed us to understand his situation on a much deeper level,” Wajda said. “Hearing Dr. Canessa in person truly brought his story to life and it provided us with a once-in-a-lifetime opportunity that no book could.” 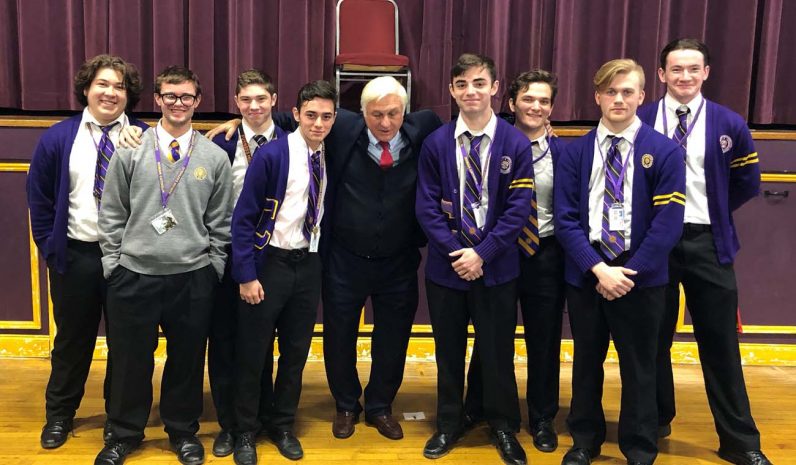 NEXT: Archdiocese offers hope and help for addiction recovery