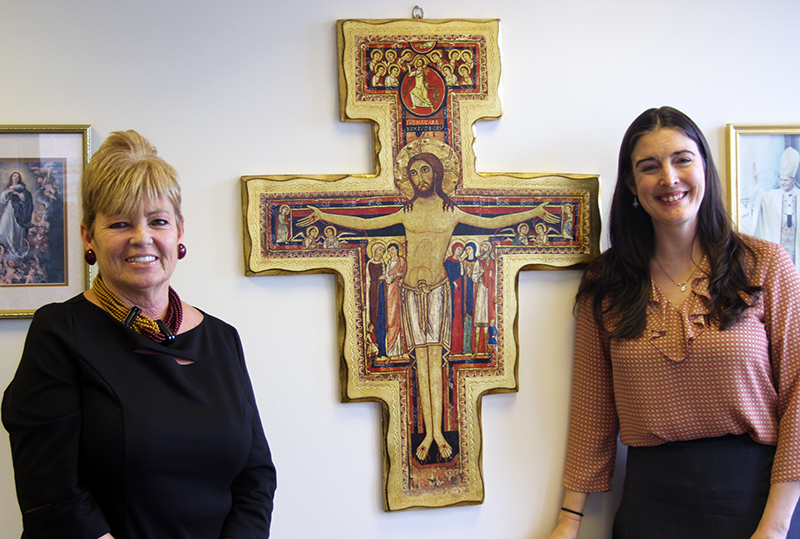 In response to rising drug overdoses throughout the area, archdiocesan staffers Amy Stoner of Catholic Social Services (left) and Meghan Cokeley of the Office for the New Evangelization (right) have recently launched websites that provide both practical and spiritual support for addiction recovery. (Photo by Gina Christian)

Amy Stoner and Meghan Cokeley want those struggling with addiction to know something.

“You are never alone,” said Stoner, who heads up the community-based and housing and homeless services divisions of archdiocesan Catholic Social Services (CSS).

“Cling to Christ,” added Cokeley, director of the Office for the New Evangelization. “He knows the way out.”

An estimated 70,000 drug overdose deaths occurred in the U.S. as of July 2018, according to the Centers for Disease Control (CDC), with a number of fatalities underreported. Opioids, particularly fentanyl, have driven a twenty-year increase in overdose deaths across the nation, and the CDC reports that an average 130 Americans now die every day from an opioid overdose.

Pennsylvania ranked as one of the top five states for such deaths, with 44.3 per 100,000 in 2017 alone. At the start of 2018, Governor Wolf declared the heroin and opioid epidemic a statewide disaster emergency, and authorized several initiatives for improved treatment and prevention.

Stoner and Cokeley believe the Catholic Church should be at the forefront of helping those wounded by addiction. Recently, they created two websites that provide access to a wide range of resources that offer both practical and spiritual support for those affected by substance abuse.

CSS’s Recovery and Hope page includes several emergency numbers for those in crisis (noting that those in medical distress should call 911 immediately), as well as contact information for county-based agencies throughout the area. Options for those with and without medical insurance are provided, along with lists of treatment centers and support groups. Specific aids for family, friends, pastors and community leaders are included.

(Listen to Amy Stoner, director of archdiocesan Catholic Social Services’ community-based and housing and homeless services divisions, discuss how the Recovery and Hope website is changing the conversation about addiction.)

Stoner said that she worked with several individuals who had experienced addiction to make the website as user-friendly and helpful as possible.

“We were very intentional in designing it, and we incorporated a lot of input from those who are in recovery or who had been impacted by a loved one’s addiction,” she said.

To reduce the stigma of addiction, which inhibits treatment, Stoner and her team “really put thought into the language” used throughout the site, substituting terms such as “person with an addiction” for the more disparaging word “addict.”

“We want to create a change in the way people view this issue and how you speak about it,” Stoner said.

Part of that change includes offering a more comprehensive understanding of the nature of addiction, said Cokeley.

Her office’s website, Hope in Christ, presents spiritual support for addiction, which requires “a two-pronged response” that accounts for both body and soul.

“Treatment has to be on every level,” said Cokeley. “In the end, the human person isn’t just biological, and isn’t just psychological. We have a soul, too.”

While recovery “is not going to be instant, even with Christ involved,” Cokeley noted that God’s presence in the treatment process “gives it a power that nothing else can.”

“Many people who are Christian, who are Catholic, have told me, ‘Without Christ, this would not have been possible,’” she said.

Cokeley stressed that sacraments such as Eucharist and reconciliation infuse the person in recovery with the grace and strength needed to overcome addiction’s powerful pull. The site lists ministries such as the Calix Society, a support group for Catholics in recovery from alcoholism that centers on the frequent reception of these sacraments.

(Listen to Meghan Cokeley, director of the archdiocesan Office for the New Evangelization, discuss how faith and the sacraments can be a vital part of addiction recovery.)

Other resources on the site include numerous faith-based ministries and support groups that address a range of addictions, from drug and alcohol abuse to pornography. Many of the resources are parish-based ministries that Cokeley discovered through her archdiocesan-wide evangelization work.

“One of the things I’ve noticed is that there are a lot of people out there doing really good stuff to respond to addiction, but one of the problems is that no one knows about it,” she said.

Both Stoner and Cokeley point out that the two sites, which are interlinked, provide a central location for the many grassroots efforts to respond to addiction. For those in parishes without specific recovery ministries, “there’s a good chance one of your neighboring parishes has something,” Cokeley said.

As recovery ministries and programs have burgeoned in response to the current epidemic, with varying degrees of quality and effectiveness, the archdiocese can act as a clearinghouse for trusted resources, she added.

Stoner said that while CSS does not directly offer drug and alcohol treatment, its Mercy Hospice provides housing and homeless services to women in recovery. CSS sponsors an annual “Women in Transition” retreat to meet the spiritual needs of these clients. In addition, most of CSS’s outreaches, including its five county-based family service centers, address the associated effects of addiction, such as homelessness, job loss, hunger, mental illness and parenting issues.

Above all, Stoner and Cokeley want their sites to communicate hope to all who access them.

“Recovery is possible,” said Stoner. “You can turn this over to God, and you will get through it.”

“Christ will lead you out of the darkness of addiction,” Cokeley said.

For information about and assistance with addiction recovery, visit Catholic Social Services’ Recovery and Hope website and the Office for the New Evangelization’s Hope in Christ: Spiritual Support for Addiction website.

NEXT: Feeding needy neighbors, near and far, through CRS Rice Bowl