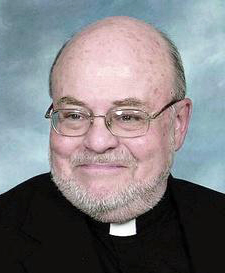 Father Steven J. Marinucci, 71, is on administrative leave and his priestly duties are restricted after the Archdiocese of Philadelphia received an allegation he sexually abused a minor decades ago.

He has denied the allegation, and it is the first of its kind the church has received about him, according to a statement by the archdiocese.

Since the priest had been serving at St. Matthew Parish in Northeast Philadelphia as a parochial vicar for about eight years, the announcement about him was made at all weekend Masses there, and counselors were available for parishioners.

During the time of the alleged abuse in the late 1970s, Father Marinucci served at St. Hubert High School for Girls, with residence at two nearby Northeast Philadelphia parishes, St. Bernard and St. Bartholomew.

Ordained in 1974, he has served mostly in parish ministry. He was assigned for 10 years at St. Charles Borromeo Seminary where he was a professor, formation team member and director of pastoral and apostolic formation. (See his list of assignments below.)

The allegation of sexual abuse by Father Marinucci was immediately referred by the archdiocese to local law enforcement per archdiocesan policy. He was suspended earlier last week, the archdiocesan statement said.

While on administrative leave he will not be able to exercise his ministry publicly, present himself publicly as a priest, or be present in any parishes or schools.

After civil authorities complete their work, which may or may not lead to the filing of charges, the archdiocese will launch its canonical (church law) investigation, conducted by the archdiocesan Office of Investigations.

It is led by John Delaney, a former first assistant District Attorney for the City and County of Philadelphia. His office also probes matters of alleged activity that is not illegal in nature, but that may violate the Standards of Ministerial Behavior and Boundaries established by the archdiocese.

Delaney oversees that work and is the liaison between the Archbishop of Philadelphia and the Archdiocesan Professional Responsibilities Review Board. It was established in 2002 and is composed of 12 men and women, both Catholic and non-Catholic, “who possess extensive professional experience in investigation, prosecution, child abuse prevention, victim services, and the treatment of sexual offenders,” according to the archdiocese.

According to archdiocesan procedures, the board receives the results of canonical investigations conducted by the Office of Investigations. The board then evaluates all facts and makes a recommendation to the archbishop regarding an individual cleric’s suitability for ministry so that he can make a decision in the matter.

Anyone wishing to report an allegation of sexual abuse, or any other criminal activity perpetrated by a priest, deacon, employee, or volunteer of the Archdiocese of Philadelphia, may contact a local law enforcement agency and/or the archdiocesan Office for Investigations at 1-888-930-9010. That office may also be contacted to report a violation of the Standards of Ministerial Behavior and Boundaries.

Victims of sexual violence and exploitation who need assistance and support may find services through the Victim Assistance Office of the Archdiocese of Philadelphia at 1-888-800-8780 or philavac@archphila.org.

NEXT: Awards to honor youth in liturgical music ministry