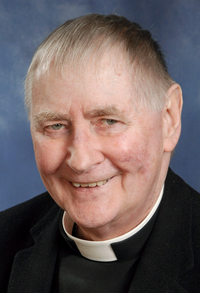 Born in Cork City, Ireland, the son of the late John P. Sheehan and the late Margaret (Duragon) Sheehan of mixed Irish-English heritage, he began his education at Seldon Public School in Croydon, Surrey, England.

During World War II in 1942 he came to the U.S. with his mother and brother on the SS America (renamed the USS West Point during the war). They were lucky, as he would later tell it: the ship next to theirs in the convoy was torpedoed.

In Philadelphia he attended Incarnation of Our Lord and St. Martin of Tours schools and Northeast Catholic High School for Boys. An excellent student, he graduated from North number four in a class of approximately 1,000, according to school records.

After high school he entered the novitiate for the Oblates of St. Francis de Sales, but after a year he transferred to St. Charles Borromeo Seminary to study for the priesthood for the Archdiocese of Philadelphia.

In 1990 he was appointed pastor of Sacred Heart, Philadelphia and named pastor emeritus in 2010.

Father John Oulds remembers when he and Father Sheehan were curates together at Nativity B.V.M. in Port Richmond.

“If you had him for a friend you had a friend life,” he said. “He was highly intelligent and pursued degrees in several subjects where he could be of service to people in their needs. He was a true shepherd, a pastoral person especially to persons with special needs, alcoholism and same-sex attraction. He reached out to the marginalized. He was a member of the priests’ committee on alcoholism.”

If he had a quirk, Father Sheehan was a bit of an Anglophile and loved everything British, according to Father Oulds. Which is funny considering his Irish surname and service in parishes that had quite a few Irish in them, including Sacred Heart.

While at Sacred Heart he oversaw many renovations and was responsible for the school being accredited by the Middle States Association of Colleges and Schools Commission on Elementary Education in 1994.

“He did many good things, works that people never knew about. He was a private man, a gentle man, and he was very organized,” said Bernadette D’Allesandroni, a Sacred Heart parish worker. “The people who really knew him really loved him,” she said. “He really fought tooth and nail to keep the school open when they wanted to consolidate it, and I think that’s when he retired, when he knew the school would close.”

Father Richard Rudy was also stationed with Father Sheehan at Nativity in Port Richmond, and he too was struck by his care for the elderly and the sick, which was important because at that time “we had 300 people on our Communion calls,” he said. “He was really tuned into them and he would go to their meetings, he would do shopping for them.”

Before Father Sheehan died, according to both Father Rudy and Father Oulds, knowing the end was coming near, he had a couple of hundred postcards printed up and sent to his friends. He reviewed what he had done and what he wanted done, even a Mass at Christ the King Church.

He may have chosen that church because priests can be sentimental about their first assignment, his friends speculate.

An Anglophile to the end, he quoted from St. Thomas More’s last letter before his execution to his daughter, Meg. It read, “Pray for me as I shall pray for you and all your friends, that we may merrily meet in heaven.”

At Father Sheehan’s request a memorial Mass will be celebrated at Christ the King Church on Saturday, May 4 at 10 a.m. Among the concelebrants will be Father Oulds and Father Rudy. Deacon Thomas Moleski of the Camden Diocese will preach.

Among Father Sheehan’s survivors are his sister in law, Barbara Sheehan, and nephews Terrance, Kevin, Brendan, Michael and Brian Sheehan.

Interment will be private.