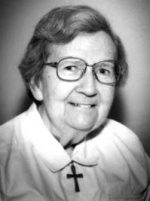 Sister Margaret Tryon died Jan. 28 at the Maryknoll Sisters Center in Maryknoll, N.Y. She was 90 years old and had been a Maryknoll sister for 71 years.

A member of St. Thomas Aquinas Parish in Croydon, she attended Nazareth Academy High School in Philadelphia and graduated in 1946. After graduation she worked at her father’s company, William A. Tryon Co. in Croydon. She also worked at John J. Nesbitt Inc. in Philadelphia.

In 1950 Sister Margaret attended Westchester Community College in Westchester County, N.Y., earning an Associate of Arts degree in applied sciences with a major in food service administration in 1952.

She was assigned to Hawaii in 1953 to teach at a Maryknoll School until 1957. From 1958-1962, she was assigned to a school in Majuro in the Marshall Islands. She then returned to Maryknoll, N.Y. to study at Maryknoll Teachers College, where she earned a Bachelor of Science degree in education in 1963.

Sister Margaret served in the Marshall Islands, Hawaii and Maryknoll variously from the mid-1960s until the late 1990s in roles including education, pastoral service and prison ministry.

In 2000 Sister Margaret retired to the Maryknoll Sisters Center, where she remained until her death.

Her funeral Mass was celebrated Feb. 2 in the Chapel of the Annunciation at the Maryknoll Sisters Center, Maryknoll, NY.

Sister Margaret is survived by two brothers, William and James; and a sister, Gertrude. Her parents and another sister, Dorothy, have predeceased her.

NEXT: Bernardine Sister who ministered for 72 years dies in Reading