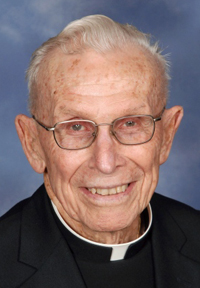 He was ordained May 10, 1952 at the Cathedral of SS. Peter and Paul by Archbishop John F. O’Hara and his first assignment was as parochial vicar at St. Jerome Parish, Tamaqua.

“He was a good man and a great priest,” said Father Alfonso Concha, the current pastor of St. William. “He was very kind and generous, and a lot of people remember him, not only from here but from Cardinal  Dougherty.”

After a recent Mass at St. William at which Msgr. Mortimer preached, Father Concha recalled “he was a good speaker, got his message across very well. It was a simple message, but close to God.”

Mary Murray, who worked for the parish and in the rectory for many years, said, “I never heard him talk bad about anybody. He was the same way in the rectory. He was so kind, and he was so holy.”

Once she recalled, she was robbed on the street. After that Msgr. Mortimer directed that whichever priest was on call at night would have to drive her home.

Father Joseph Watson, who was a son of the parish and later pastor of St. William himself, said his vocation was influenced by Msgr. Mortimer.

“I met him when I was in high school; he loved being a priest and he was gifted and talented,” he recalls. “He was an excellent pastor and very effective.”

Regina O’Reilly, a former parishioner at St. William’s, recalls Msgr. Mortimer “was a breath of fresh air when he arrived at the parish. He was excellent in what he did and was a real advocate for pro-life. Every year he would want more buses going to Washington.”

But she especially remembers his devotion to the Blessed Mother. “I went to Lourdes with him twice and also to Guadalupe,” O’Reilly said.

“He always shared at our Divine Mercy Masses that his most enjoyable experience was spending time in the confessional, particularly spending hours upon hours, days upon days hearing confessions at Lourdes, a trip he looked forward to each and every year,” Houser recalls.

“I personally can’t imagine that, but Monsignor loved it — he was allowing God to work through him for the confessor, offering them the mercy and grace each person spiritually needs to live within their human experience.”

Concelebrants will include his seminary classmates Msgr. William J.J. O’Donnell and Father David B. Machain, also Father Alfonso Concha and Father Watson, who will be the homilist.

Msgr. Mortimer is survived by his sister, Ellen V. Jones and nieces and nephews Michael, Thomas, Daniel, Ellen and Theresa and their families.

Interment will be at Our Lady of Grace Cemetery, Penndel.

NEXT: Retired pastor of St. Gabriel Parish, Stowe, dies at 89