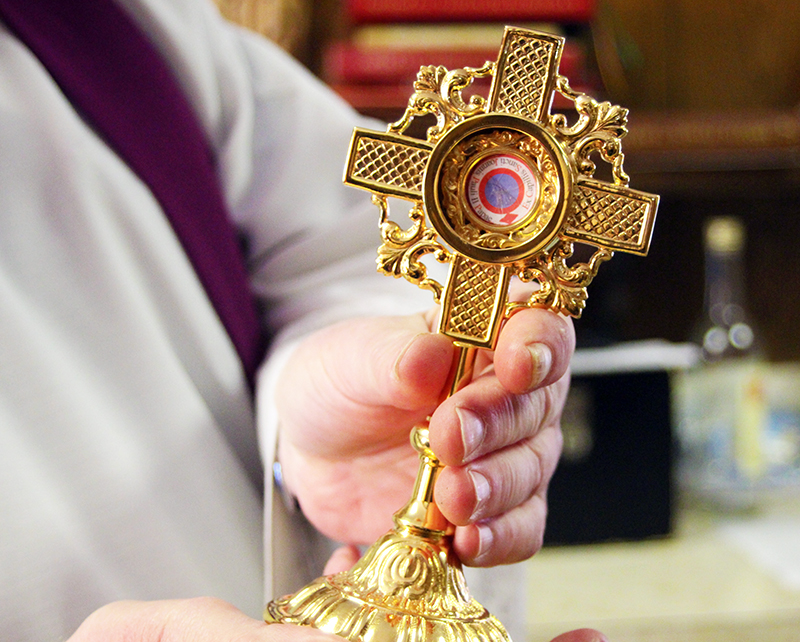 Father Joseph Zingaro, pastor of St. John Cantius Parish in Philadelphia, holds a first-class relic of St. John Paul that he received during a March 16 Mass from Archbishop Mieczyslaw Mokrzynski, who served as the late pontiff’s personal secretary from 1996 to 2005. (Photo by Gina Christian)

A first-class relic of St. John Paul has found a new home at a Philadelphia parish with a vibrant Polish community.

During a March 16 vigil Mass, Archbishop Mieczyslaw Mokrzynski presented strands of the late pontiff’s hair in a golden reliquary to Father Joseph Zingaro, pastor of St. John Cantius in Philadelphia’s Bridesburg section. The archbishop served as Pope John Paul II’s personal secretary from 1996 to 2005, and currently presides over the Archdiocese of Lviv, Ukraine.

Speaking through an English translator, Archbishop Mokrzynski prayed that the relic would inspire “a strong unity of prayer” among parishioners and that it would “bring them immense graces” as they followed the saint’s example “in deep faith and love.”

The liturgy, celebrated in both English and Polish, was attended by several hundred parishioners and supporters, a number of whom dressed in traditional Polish costume. The Mass featured choral music in both languages under the direction of Wojciech Hollender, who also served as organist, and David Zagorski.

(See a photo gallery of the Mass at which the relic was received here.)

The relic found its way to the parish thanks to parochial vicar Father Konstanty Pruszynski, who met Archbishop Mokrzynski during a recent conference in New York. In response to Father Pruszynski’s request, the archbishop agreed to visit the parish to install the relic personally. It is considered “first-class” because it is derived from the physical remains of St. John Paul II.

“It’s such a privilege to have it,” said Father Joseph Zingaro, pastor of St. John Cantius.

The relic is particularly significant because St. John Paul “was a pope of our time, and we lived during his pontificate,” noted Father Zingaro, noting that the parish’s former school was named for the late pontiff.

Parishioner Beata Zuk was a preteen in her native Poland when the former Cardinal Karol Wojtyla was named pope in 1978, making him the first non-Italian pontiff in more than 450 years, and the first from a Slavic nation. 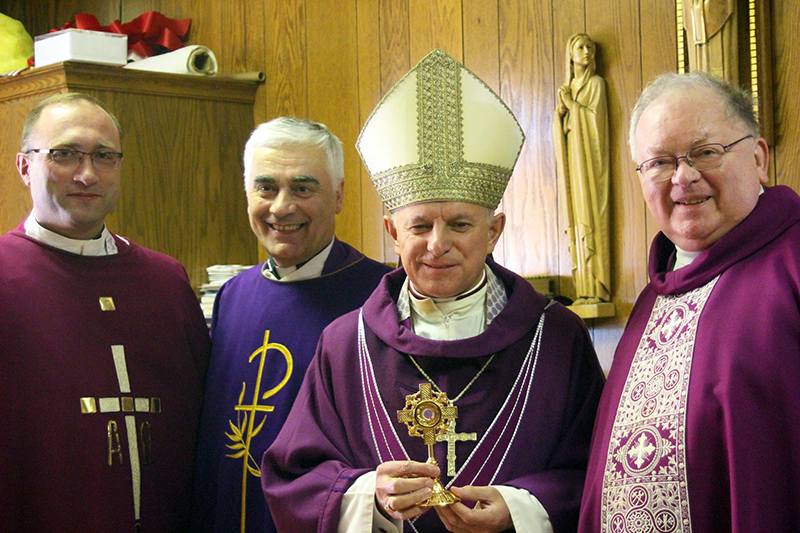 “I remember it like it was yesterday,” she said. “We came to CCD class, and our pastor told us we were free to go home because Cardinal Wojtyla was elected. Everybody was watching television.”

Zuk said the memory of “seeing him at the balcony coming (on) as pope” still gives her “goosebumps.”

She said Pope John Paul II was able to inspire “a feeling when you saw him, when he was talking, seeing how good he was with kids.”

Zuk added that the saint’s love for his native land was evident during his first visit there as pope.

“Seeing his face, you could tell how much he missed being there,” she said. “He liked mountains, and everything in Poland. It was wonderful when he came back.”

Although Pope John Paul II was unable to stop at St. John Cantius Parish during his 1979 visit to Philadelphia, his relic will convey a sense of his presence to parishioners, even those who are hospitalized.

“People have already asked us to take the relic to those who are sick,” said Father Zingaro. “We’ve gotten a few calls already, and we’ll be doing that as much as we can.”

NEXT: Praying to Mary on North Philly’s mean streets