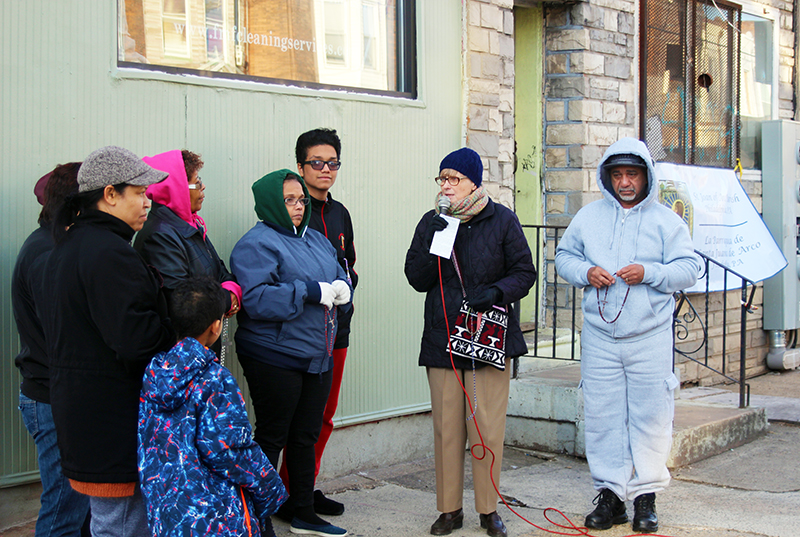 A dozen members of Holy Innocents Parish braved raw winds and drifting trash to invoke Mary’s intercession for one of the city’s most troubled neighborhoods.

On March 16, the group assembled on the corner of Frankford Avenue and Tioga Street in the Harrowgate section of North Philadelphia, where they recited the rosary in Spanish. A small sound system, mounted on a parishioner’s pickup truck, carried the prayers over the din of traffic.

The outdoor rosary was led by Sister of St. Joseph Linda Lukiewski, who serves as the evangelization and Hispanic minister at St. Joan of Arc Church in Philadelphia. Located at Frankford Avenue and Atlantic Street, the former parish, which was founded in 1919, became part of Holy Innocents in 2013. With the support of that parish, St. Joan of Arc will celebrate its 100th anniversary on Oct. 20.

St. Joan of Arc remains a worship site, offering Sunday Masses in English and Spanish that together draw roughly 200 participants. A daily communion service is held at 8 a.m. in the chapel, where prayer services and devotions such as the Stations of the Cross are also conducted.

The March 16 “rosary on the corner” was the first of three planned this Lent as a way of witnessing in a place where “everybody feels so powerless,” said Sister Linda.

“There are drugs across the street, there’s violence all over the place, and people say, ‘What can we do?’” she said. “And I always say, ‘Pray.’ It’s the most powerful thing we can do, and everybody can pray.”

Father Thomas Higgins, pastor of Holy Innocents, said that the outdoor rosaries are a response to Christ’s invitation to “pray a little harder” during Lent, “while inviting our neighbors to join us for the well-being of our neighborhood.” 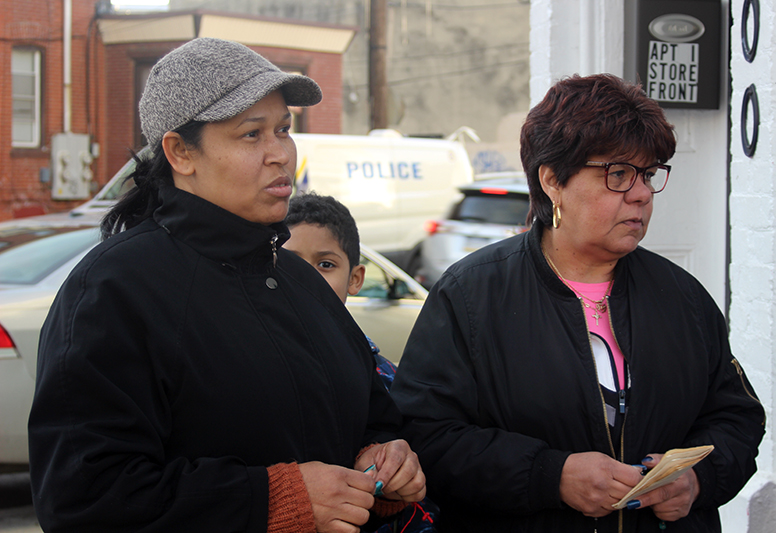 Parishioners of Holy Innocents in Philadelphia pray the rosary at the corner of Frankford Avenue and Tioga Street, March 16. (Photo by Gina Christian)

Harrowgate, often confused with the adjacent Kensington and Port Richmond neighborhoods, ranks among the poorest and most violent sections in Philadelphia, which has an overall poverty rate of nearly 26 percent. Once home to textile mills and other manufacturers, Harrowgate declined during the latter half of the 20th century as its factories closed or relocated.

According to the Philadelphia Police Department, more than 960 crimes — including homicide, rape, theft and aggravated assault — occurred in the area during the last six months.

Today, the neighborhood is working to reinvent itself through the efforts of churches such as St. Joan of Arc, a recently formed civic association and the largely Spanish-speaking residents who call Harrowgate home.

The faith of these residents, and their confidence in Mary’s intercession, inspires Sister Linda, who has ministered to Latino communities in both the U.S. and Guatemala since 1987.

“Their devotion to Mary and to the rosary, and their belief in the power of the rosary has been a great grace for me,” she said. “I’ve come to know Mary much better through my work and my life with them.”

Because it is widely prayed by Hispanic Catholics, the rosary was a natural choice for the outdoor gathering, one that Sister Linda hoped might evoke “childhood memories or other life experiences” in passersby who no longer practice their faith.

The rosary “may seem repetitive,” she admitted, but “it gets you into a rhythm of humble prayer.”

After all, she added, “people say ‘I love you’ over and over again.”

St. Joan of Arc’s next outdoor rosaries are scheduled for Saturday, March 23 at 6 p.m. at Emerald and Venango Streets, and April 13 at 6 p.m. at Frankford and Castor Avenues.