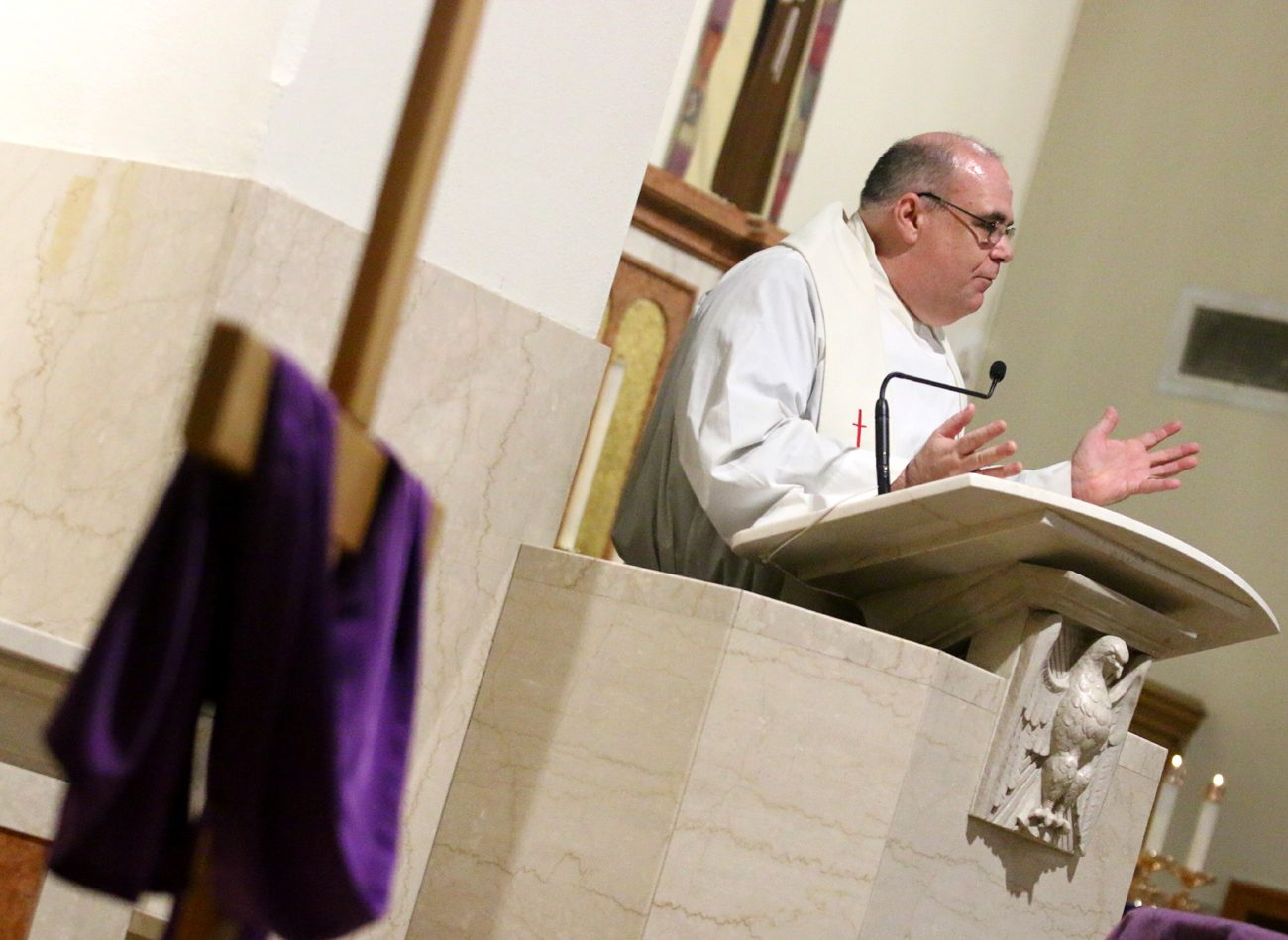 The Delaware County Lenten series began March 5 at St. Francis of Assisi Church, Springfield. Msgr. Gregory Fairbanks, a professor of church history at St. Charles Borromeo Seminary in Wynnewood, gave a talk entitled “Father, forgive them, for they know not what they do." (Photos by Sarah Webb)

Six Delaware County parishes will join together this Lenten season to explore the seven last words of Christ. The traditional devotion, popular since the 17th century, focuses on the final phrases that Jesus spoke during his passion and death.

Every Tuesday evening in Lent, one of the participating parishes will host a gathering that includes Evening Prayer, Benediction and a guest speaker. Taking part are St. Francis of Assisi (Springfield), Our Lady of Fatima (Secane), St. Madeline (Ridley Park), Our Lady of Perpetual Help (Morton), Our Lady of Peace (Ridley Park) and St. Gabriel (Norwood).

“It’s a good way to begin our celebration of Lent,” said Father Anthony Costa, pastor of St. Francis of Assisi. “It’s joyful to have people from six parishes to pray together.”

The series began on March 5 at St. Francis of Assisi. Msgr. Gregory Fairbanks, a professor of church history at St. Charles Borromeo Seminary in Wynnewood, gave a talk entitled “Father, forgive them, for they know not what they do.

“What better way to warm the place than with music and song,” said Longo. “I take pride in being able to offer it here.” 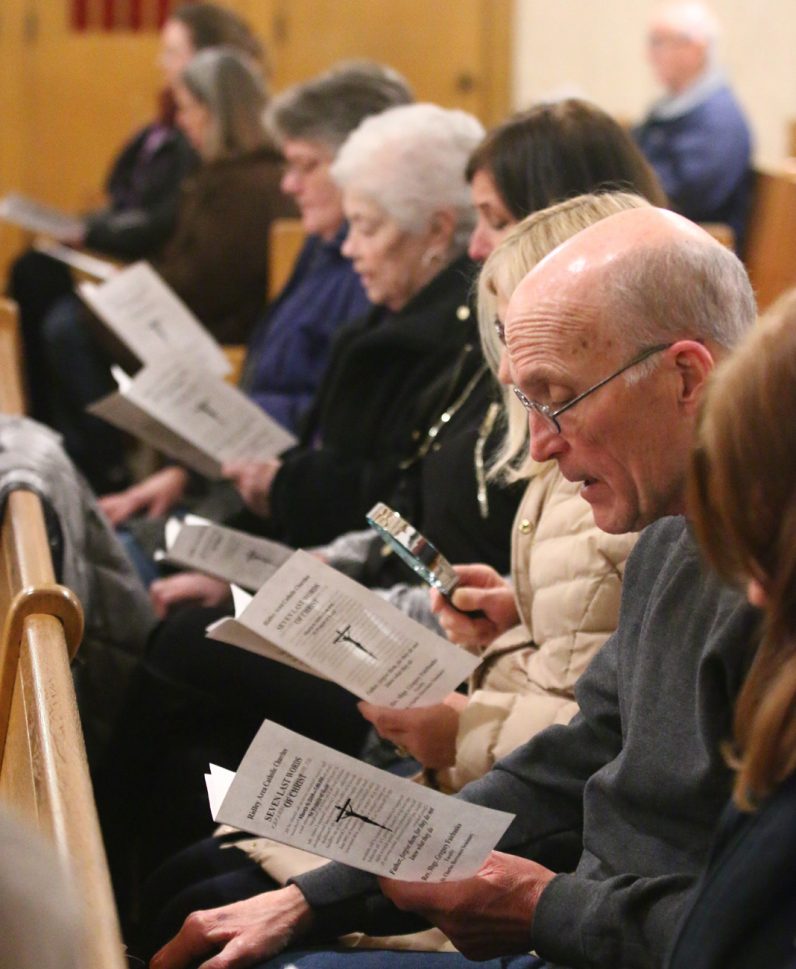 Bill Connelly from Our Lady of Fatima in Secane prays with the community.

The service opened with the hymn “O Saving Victim.” After introductory prayers, Msgr. Fairbanks shared a reading from St. Paul’s Letter to the Colossians, in which the Apostle exhorts the faithful to “in word or in deed, do everything in the name of the Lord Jesus, giving thanks to the Father through him” (Col 3:17).

In his reflection, Msgr. Fairbanks noted Christ’s unreserved forgiveness of his executioners, contrasting it with the common practice of forgiving others conditionally – for example, when they have already forgiven us, or when justice has already been served. He cited the example of the patriarch Joseph, who mercifully forgave the jealous brothers that had sold him into slavery, as described in the book of Genesis.

“These stories challenge us to realize that we can make the same choices to make in our lives,” said Msgr. Fairbanks, adding that participants could deepen their Lenten experience by forgiving others the way they themselves would want to be forgiven by God.

“I just feel like it prepared me for Lent,” said Deborah Smith, a parishioner of Our Lady of Fatima.

Luke Le Tourneau, a member of St. Francis of Assisi Parish, said that this evening truly set the tone for Lent.

“It’s a great way to get our mind in that mindset,” he said.

The Lenten series will continue on March 12 at Our Lady of Fatima Church in Secane. Msgr. Paul Dougherty, pastor of St. Margaret in Narberth, will speak the second of the seven last words, “Today you will be with me in Paradise.” 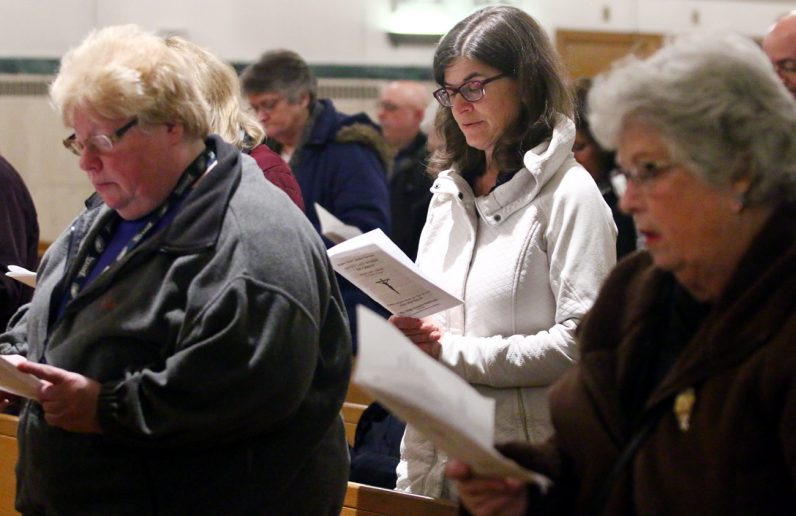 NEXT: ‘Listening session’ on racism ends, work for justice continues