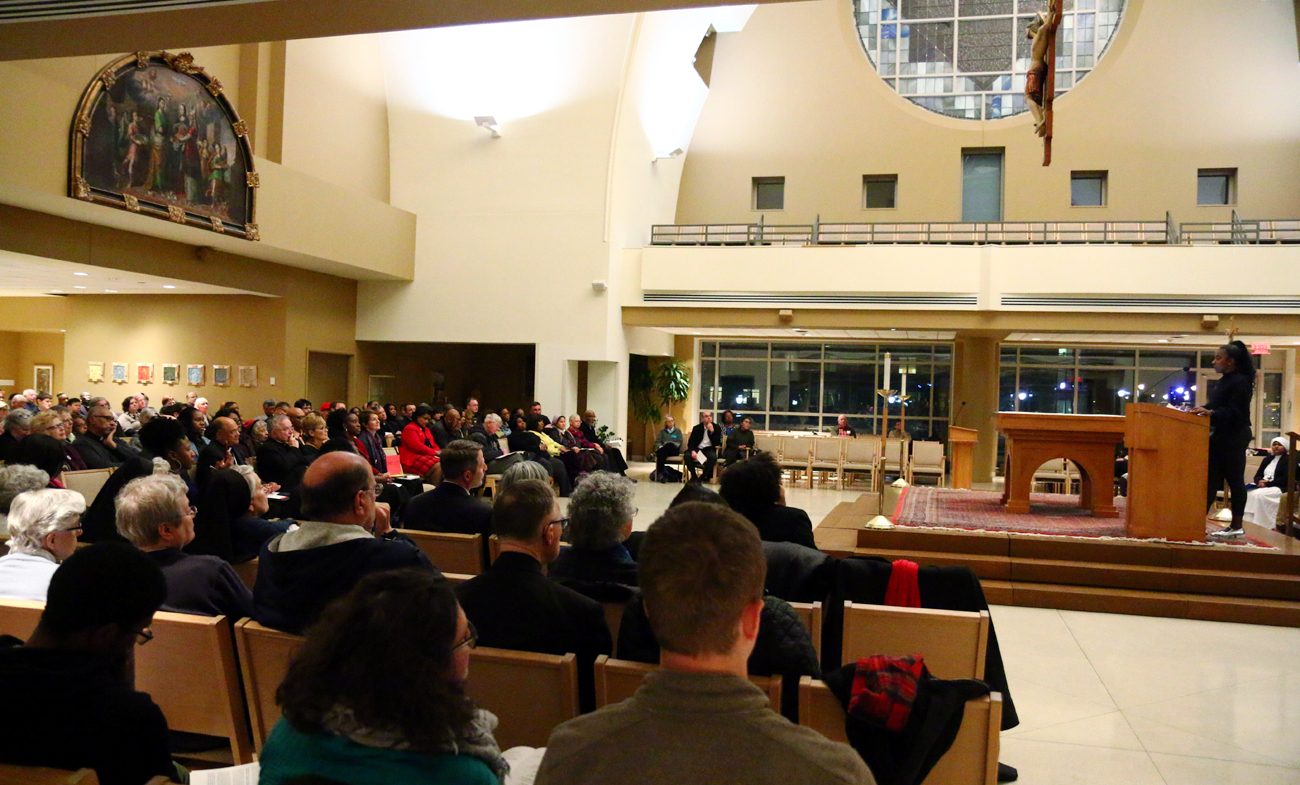 A speaker offers testimony on her experience of racism during the "USCCB Listening Session on Racism" held in the chapel of St. Joseph's University on Monday, Feb. 25. The sessions being held across the United States coincide with the November 2018 release of the U.S. Conference of Catholic Bishops' pastoral letter on racism, "Open Wide Our Hearts: The Enduring Call to Love." (Photo by Sarah Webb)

The last in a series of sessions in the Philadelphia region examining racism in the United States today has left clergy and Catholics in the pews with much to reflect on, and work to do.

The Archdiocese of Philadelphia came together with the United States Conference of Catholic Bishops’ Ad Hoc Committee Against Racism for the final event of “Open Wide Our Hearts: The Enduring Call to Love Series.”

The “USCCB Listening Session on Racism” held Feb. 25 at the chapel of St. Joseph’s University culminated the local series — other such listening sessions have been held in cities across the United States — that was hosted by the archdiocesan Office for Black Catholics and began with the Dr. Martin Luther King Jr. celebration led by Bishop Edward Braxton last January at St. Joseph’s.

But the actual implementation of goals stated in “Open Wide Our Hearts” — U.S. bishops’ November 2018 pastoral letter on racism — will take place during Lent, the Easter season and beyond.

Franciscan Father Richard Owens, director of the Office for Black Catholics, said the committee is analyzing responses and testimonies collected at the presentation and will use them to make recommendations to Archbishop Charles Chaput.

“I hope that members of the Archdiocese of Philadelphia will take time to read and reflect on the pastoral letter against racism, ‘Open Wide Our Hearts,’” Father Owens said. “Perhaps, as we begin the Lenten season, the letter may serve as a vehicle for interior transformation.”

(See a brief overview of the pastoral letter.)

Among those in attendance at the “Open Wide Our Hearts” event Dec. 6, 2018 at St. Charles Borromeo Seminary in which Atlanta Archbishop Wilton Gregory spoke on economic racism, and the listening session last month at St. Joseph’s was Cynthia Brown. 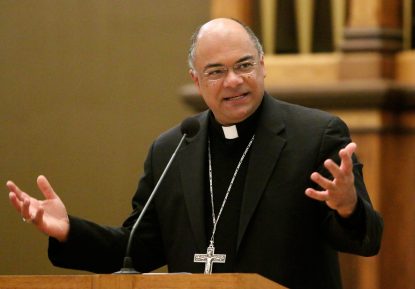 Bishop Shelton Fabre of the Diocese of Houma-Thibodaux in Louisiana moderates the USCCB Listening Session on Racism. (Sarah Webb)

“I think the sessions were very productive,” said Brown, a recipient of the St. Martin de Porres Medal from the Philadelphia Archdiocese, member of Our Lady of Hope Parish in Philadelphia, member of the Ladies Auxiliary of the Knights of Peter Claver and an ambassador for the cause for the sainthood of Augustus Tolton.

“I think it called attention to the issues that we all need to work on. It served as a catalyst to motivate people to address the issues. I especially enjoyed the listening session because there was no question and answer. We learned much from listening to the experiences, particularly of the African American nuns. So, this was a starting point.”

Bishop Shelton Fabre of the Diocese of Houma-Thibodaux in Louisiana spoke at the USCCB Listening Session on Racism, which was moderated by St. Joseph’s University professor Tia Pratt and La Salle University professor Maureen McConnell. Bishop Fabre said Lent is a good time for Catholics to move toward the Kingdom of God.

“I hope that first and foremost all will take the time to read the pastoral letter,” he said in an interview with CatholicPhilly.com. “I also hope that hearing people’s stories and how they are hurt by racism will engender the necessary discussion between people. As people share their encounters, as they did during the listening session, they will not to be afraid of opening up discussions on these issues, (doing so) with a new understanding about what we can do together to end racism.”

Bishop Fabre added that he hoped the listening sessions enhanced the importance of seeing the human dignity of all.

Ray Boshara from the St. Louis Federal Reserve was among the speakers for the “Open Wide Our Heart” series. He spoke at a Feb. 6 session at La Salle University on the topic “Systematic Causes of the Wealth Gap Between Black and White Families.”

Boshara pointed out he was speaking about his own research and findings in relation to the bishops’ pastoral letter.

“The wealth gap is noted on page 14 of the pastoral letter,” Boshara said. “I am just adding historical context and texture to that. There are many factors that keep African Americans from achieving what most would consider financial security in America. By having this awareness (that) this is structural, there are things that we can do.”

Boshara added that the wealth gap exists not simply because of the things a particular individual or family does or does not do — such as making a budget, saving their resources, spending wisely. Rather, the economic gap is systemic, he said.

So what can ordinary Catholics do to alleviate the racial gap? “I believe that education helps,” Boshara said. He said starting a scholarship fund for a youngster would be one of the proactive ways that a parishioner could assist.

“One could help those who are disadvantaged to get to college, by helping them to save for college. Since the disparity starts early, one could help out with maternal care for a young mother. One could look for ways to reducing the financial stress on families. There are many ways that one could close the gap,” Boshara said.

He hoped most Catholics would learn more about the origins of the current economic gaps, perhaps by reading some of his ongoing research on the topic.

As citizens and Catholics, especially those in leadership roles, people must find ways to ensure that all achieve financial security — starting with this Lenten season, according to Boshara.

PREVIOUS: Delco parishes join to reflect on the seven last words of Christ

NEXT: Bishops’ letter challenges all to see how racism infects America