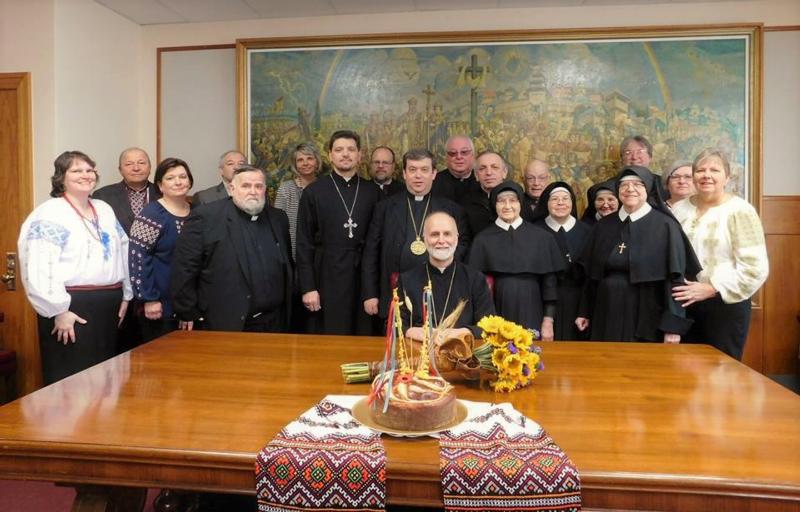 PHILADELPHIA (CNS) — While a graceful cascade of white snowflakes gently fell to the ground outside the chancery March 1, the staff of the Ukrainian Catholic Archeparchy of Philadelphia welcomed the new Metropolitan-Archbishop Borys Gudziak to the archeparchy’s pastoral center.

Standing in front of a banner reading, “Welcome, Metropolitan Borys,” in both English and Ukrainian, featuring the Ukrainian colors of blue and gold, Bishop Andriy Rabiy offered a warm welcome to Archbishop Gudziak, as he was presented with the traditional greeting of bread and salt and a bouquet of sunflowers.

After the welcome, Archbishop Gudziak met with the staff in the chancery conference room for an informal get-together. He briefly shared his goals for the archeparchy and also asked staff members for their prayers and to express what their expectations were of him: “What do you need of your new archbishop? What type of archbishop do you want?” he asked them.

Among the thoughts he shared with them, he said he wants to lead the archeparchy as a spiritual brother, father and shepherd, who would inspire the presbyterate, the religious and the laity, the entire archeparchy, to grow in their relationship to Christ.

For the church, for the world, in this age, he said, Catholics need to become a holy and spiritual presence to inspire all to live a life of virtue as they follow the teachings of Jesus Christ and do his will in the world.

He emphasized: “I want to be a good listener and I ask you to be my teachers.”

Archbishop Gudziak reflected on two qualities his mother sought to impress upon him and instill in him: kindness and gentleness. He hopes these character traits can be shared in his relationships with the clergy, religious and laity.

The new spiritual shepherd of the Philadelphia archeparchy, a native of Syracuse, New York was named to this hierarchical position by Pope Francis Feb. 18. At the time of his appointment he was the Eparch of St. Volodymyr the Great Eparchy of Paris serving France, Benelux and Switzerland.

He will be formally enthroned June 4 in the Ukrainian Catholic Cathedral of the Immaculate Conception in Philadelphia.

Bishop Rabiy, an auxiliary of the archeparchy, has been serving as apostolic administrator since his appointment by Pope Francis after the pontiff accepted the resignation for health reasons of Metropolitan-Archbishop Stefan Soroka April 16, 2018.

Auxiliary Bishop John Bura also serves the Ukrainian Catholic Archeparchy of Philadelphia, which includes the District of Columbia, Virginia, Maryland, Delaware, New Jersey and parts of eastern Pennsylvania. It has a total Catholic population of about 15,000.

PREVIOUS: Long-time base for city’s Black Catholics set to close

NEXT: Deacon’s faith journey perks up young adults at coffeehouse