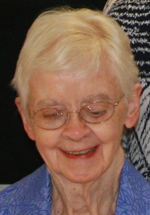 The youngest of 13 children in a family that belonged to St. Edward Parish in Philadelphia, Sister Nancy attended the parish grade school before going on to John W. Hallahan Catholic Girls High School.

She entered the Sisters of the Holy Child Jesus in 1953 and made her final vows in 1960. She became well known by her religious name Mother Joseph Sarto.

Despite her visual impairments, Sister Nancy became a teacher and taught at St. Elizabeth School in New York City for 11 years before moving to Portland, Oregon where she taught for seven years.

In 1973 Sister Nancy returned to Philadelphia to teach at her alma mater, St. Edward School. Her quiet but strong leadership skills were recognized, and she was appointed superior at the parish’s convent and then at Annunciation Convent in Washington, D.C.

In 1977 Sister Nancy received training in group dynamics at Hahnemann Hospital in Philadelphia, where she honed her leadership and team-building skills. She relied on these skills as assistant principal at St. Elizabeth’s and when she was named superior of Holy Child Center in 1981.

One of several Holy Child sisters trained in gerontology, Sister Nancy served a growing population of aging members in the American Province.

In the 1980s she led a successful senior care program in New York City until returning to Philadelphia in 1993 to volunteer at senior adult programs and Holy Child Center.

While her sight had continued to diminish, Sister Nancy’s compassion and concern for others remained vibrant to the end.

The funeral Mass was celebrated Jan. 23 at Holy Child Chapel in Rosemont.