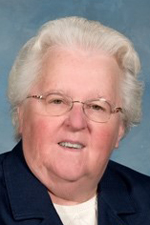 Sister Dorothy ministered in the archdioceses of Newark and Philadelphia and the Diocese of Trenton.

She is survived by her brother William Payne and cousin Joan DeVito (Dominic). She is also survived by her extended family and members of her congregation, the Sisters of St. Joseph.

The funeral Mass was celebrated Feb. 7 at St. Joseph Villa.

PREVIOUS: Bernardine Sister who ministered for 72 years dies in Reading

NEXT: Despite visual impairment, sister ministered in schools, elder care