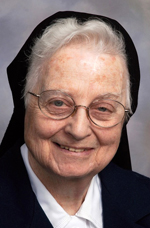 Born in Philadelphia, she entered the Congregation of the Sisters, Servants of the Immaculate Heart of Mary on Sept. 8, 1945 from Immaculate Conception Parish in Philadelphia. She pronounced her first vows in 1948.

Sister Catherine served in the Archdiocese of Philadelphia. In August 2009, she entered Camilla Hall where her service continued in the Apostolate of Prayer.

NEXT: Sister Julia Tierney, teacher and college lecturer, dies at 88