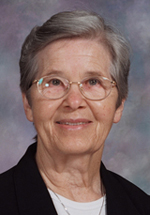 Sister Julia Tierney, O.S.F. (formerly Sister Jarlath Anne), 88, died Feb. 15 in Riddle Memorial Hospital. She had been a professed member of the Sisters of St. Francis of Philadelphia for 69 years.

She was born in County Mayo, Ireland, where she was a member of St. Mary Parish in Roundfort. She entered the congregation in 1946 and professed her first vows in 1950. Sister Julia earned a B.A. in English from Neumann University in Aston in 1970 and a master’s in education from Boston University in 1978. She ministered primarily in education on both elementary and college levels.

Sister Julia ministered for 19 years in the Archdiocese of Philadelphia. She taught at Neumann University and following her retirement became a volunteer at St. Mary Medical Center in Langhorne. She moved to Assisi House in Aston in 2013 where she served in prayer and hospitality ministry.

In later years Sister Julia’s ministry took her to collegiate levels where she served as a lecturer in various universities, including Calle University of Puerto Rico in Ponce, Bethlehem University in Israel, and Mpima Major Seminary in Zambia, Africa.

Following her retirement from education, she also served for six years in the Diocese of El Paso as coordinator of volunteer care at Annunciation House.

The funeral Mass was celebrated Feb. 19 in Assisi House, Aston. Burial was in Our Lady of Angels Cemetery in Aston.

Sister Julia is survived by her sisters, Peggy Heaney, Sheila McLoughlin and Anne Twohig; her brothers, Peter Tierney and James Tierney; her nieces and nephews, and by her Franciscan family.