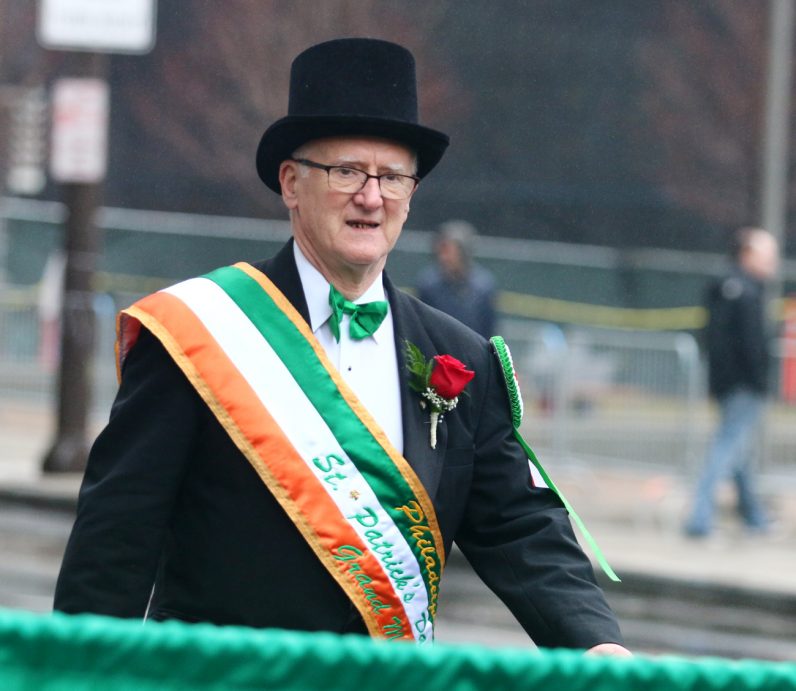 Sometimes when folks say, “Make America great again,” they forget it was immigrants who made it great in the first place. This is often underscored in ethnic parades where Old Glory is carried side by side with the flag of the particular national flag of the country of origin.

It is a certainly true with Philadelphia’s annual St. Patrick’s Day celebration.

Most of Philadelphia’s Irish go back generations in this country, but that isn’t so with Sean McMenamin who was grand marshal for Philadelphia’s St. Patrick’s Day Parade held on March 10. (The parade stepped off after a Mass at St. Patrick Church in Rittenhouse Square — See a photo gallery from the Mass here.)

McMenamin was born and raised in Ireland, came to America as a young man and has definitely achieved the American dream.

He was born in 1941 in Killadangan, a little postcard-pretty village near Westport, County Mayo at the foot of Croagh Patrick, the mountain where, according to tradition, St. Patrick fasted and prayed for 40 days in the year 441.

Although the Irish Republic was not a participant in World War II, times were not good during McMenamin’s childhood. “People don’t realize how the war affected Ireland,” he said. “We didn’t get our electricity back until 1948.” 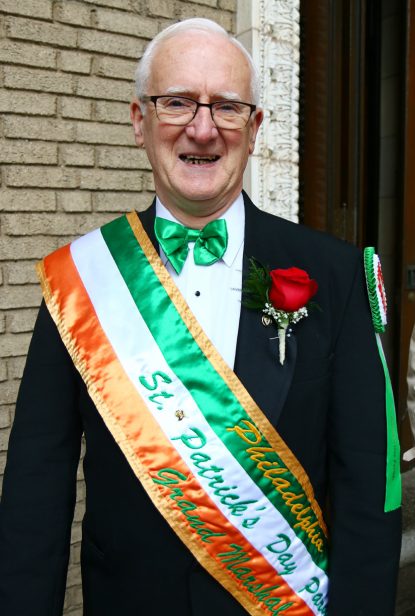 Because of the lack of employment in Ireland, many young people of his generation would by necessity go abroad.

“I went to England in 1959 and served my apprenticeship as a carpenter,” he recalls. “I worked in construction in the London area for six years, but I was looking at Australia or America for something different. There was no point in going back to Ireland because there was no chance there for me to work the skills I learned.”

Visas were much easier to get in that era, and “I came to America and New York in January 1966,” he said. “I visited cousins in Pittsburgh but decided to go back to New York which was more my style.”

Then he came to Philadelphia to visit another cousin and stayed. This was the Vietnam War era and he was soon drafted and trained for the military police and served at various posts.

In fact he was scheduled to go to Vietnam but with the luck of the Irish, his paperwork somehow got lost and he remained stateside for his entire enlistment. But thanks to the G.I. Bill after his release he was able to go back to school at the Spring Garden Institute, which assisted his career with E.I. DuPont.

Meanwhile he married Johanna Kilroy, a girl he met at the Irish Center in Mount Airy, and between them they raised their four children — Margaret, Sean, Noreen and Eileen.

For much of their marriage they lived in St. Martin of Tours Parish in Northeast Philadelphia where the children went to school, followed by Little Flower and Cardinal Dougherty High Schools. He also volunteered at Little Flower as a track coach.

Over the years McMenamin remained active with the Mayo Association and proudly marched with it every year. And of course there was the Irish Center of which he has served as president on two different occasions.

In more recent years the center was in a financial bind, and really looked like it would fold. With the help of friends in the legal profession McMenamin oversaw the now almost-completed transformation of the center from a social club into a 401-3c nonprofit organization as the John Barry Arts and Culture Association, with various services and a library.

With the children grown, Sean and Johanna downsized to a rancher in Cheltenham 16 years ago, about the same time he took early retirement from DuPont because of a company merger.

His greatest sorrow is Johanna’s passing in 2010. Now he’s a member of St. James Parish in Elkins Park but often worships at his daughter’s parish, St. Hilary in Rydal.

“I go back to Ireland every summer, and this December I was back for a wedding,” he said.

Ireland has changed, he concedes. It is a lot more prosperous now and a lot more secular. It was hit even harder by the clergy sexual abuse scandal than the United States, he believes. But Ireland has seen many crises in the past.

“There was a time in Ireland when the church was outlawed,” he said. “When you go back in history Ireland survived man-made famines, a revolution, a civil war. We never looked on ourselves as victims. We are survivors. That is in our DNA.”

PREVIOUS: Teaching teens the value of life is her life’s work