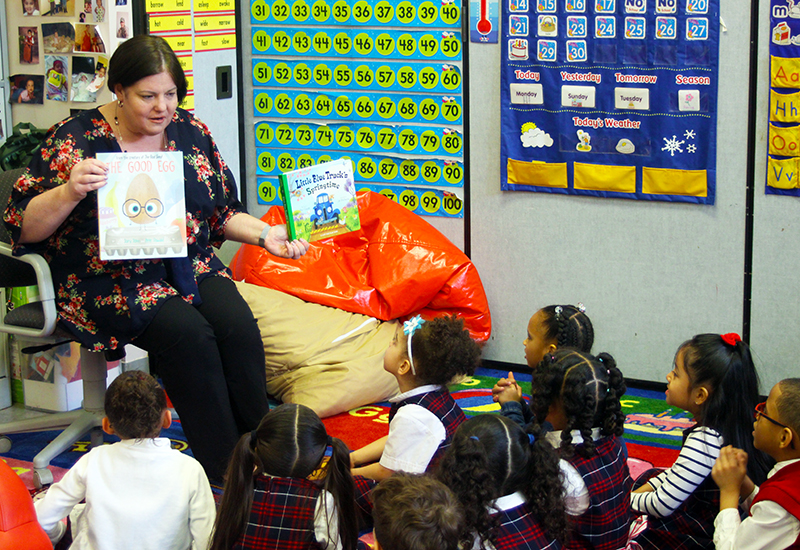 The seeds of literacy are taking deep root at a preschool operated by archdiocesan Catholic Social Services (CSS).

The grant will support the update and expansion of the preschool academy’s reading program, “Enhancing Pre-K Curriculum: Building a Two-Generation Approach to Literacy.” Now in its 20th year, the academy is one of the many programs offered through Casa del Carmen, a CSS family service center that has assisted the Latino population of North Philadelphia since 1954.

Open year-round from 7 a.m. until 6 p.m. every weekday, the academy — which received the Pennsylvania Department of Education’s highest rating — offers classes in science, math, reading and listening skills. Art, play and naps round out the day, which includes breakfast, lunch and a snack provided through archdiocesan Nutritional Development Services as part of the federal school meals program.

“It’s proven that literacy breaks the cycle of poverty,” said Crane. “And a two-generation approach embraces children and families simultaneously, so we can work holistically with both the children and their caregivers, through everything from homework assignments to an array of services to help the entire family.”

The two-generation strategy is widely used by a number of social service providers, including the U.S. Department of Health and Human Services, in a variety of programs spanning child development, home safety and economic mobility.

“There’s the traditional view of literacy, of course, but we also look at health literacy and financial literacy,” Bevenour said. “By educating parents and giving them resources in these areas as well, we’re alleviating that level of poverty for their families, so that they know better, and they do better.”

As part of the highly structured lesson plans, students conduct in-depth investigations around age-appropriate topics to which they can easily relate — such as trees, balls and insects — honing their curiosity, critical skills and language competence in the process.

Previously students at the academy, which has a waiting list of approximately 60 children, have had to share its single set of the curriculum’s materials.

“Until now, we’ve only had one copy for six classrooms, 73 children and nine teachers,” said Shari Gold, director of the Casa del Carmen Preschool Academy. “So it’s kind of difficult. You have to wait until someone’s done with one section before you can use it for your students.”

Thanks to the grant, each classroom at the school will have the updated version of the curriculum, which is now in its sixth edition. A full set of classroom materials ranges from $2,149 for basic resources to $4,599 for a bilingual kit.

“About 85% of our kids are bilingual,” said Gold. “We do have Spanish books in our library, and our teachers read to them in Spanish as well as English.” 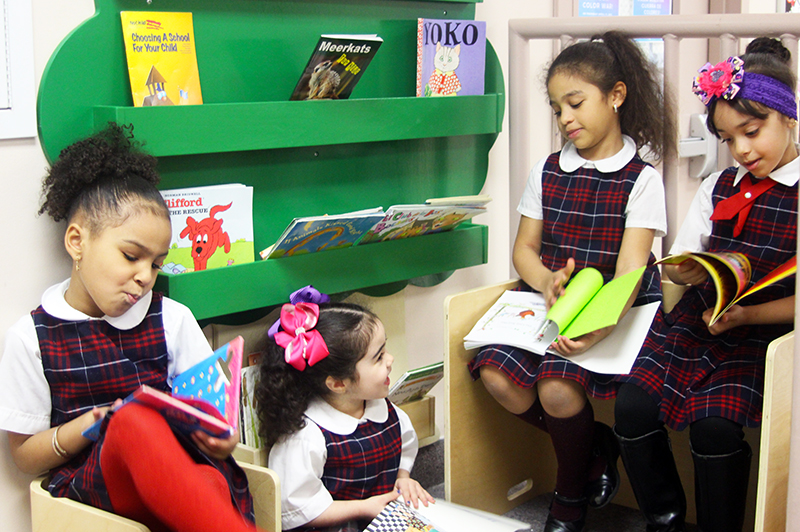 Students of Casa del Carmen Academy in Philadelphia enjoy a reading break between classes. The school, operated by archdiocesan Catholic Social Services, recently received a grant from the Archdiocesan Educational Fund to expand its literacy program, which uses a “two-generation” approach to develop language skills among both students and families. (Gina Christian)

Students aren’t the only ones who have homework to do, said Fredeswinda Rodriguez, a parent educator at Casa del Carmen.

Through a partnership with Children’s Hospital of Philadelphia and LENA Start, an early learning technology, Rodriguez recently guided several parents through a time and motion study of their daily language interactions at home. The data enabled the parents to identify specific ways to strengthen their children’s verbal development.

“We had them record one entire day of talk, and we gave them books to read to their children, along with simple activities to keep the conversation going throughout the day,” said Rodriguez.

Cultivating family literacy in a digitally distracted age can be a challenge, Rodriguez admits, but her “parent café” sessions provide an opportunity for caregivers to work through difficulties.

“One of our recent topics was on getting kids away from both screen time and ‘scream time,’” Rodriguez said.

Bevenour observed that digital technology doesn’t necessarily have to be at odds with reading.

“As a parent, and from what I’ve seen curriculum-wise, there is a great opportunity where we can teach literacy through using apps like ABC Mouse,” she said.

Whether the words are in print or on a screen, the academy’s mission is to engage students with language for the long-term, said Gold.

“It kind of goes back to the old proverb: you give a man a fish, he eats for a day; if you teach him how to fish, he eats for his whole life,” she said. “If we give a child a book today, and teach them how to read, they’ll read for life.”