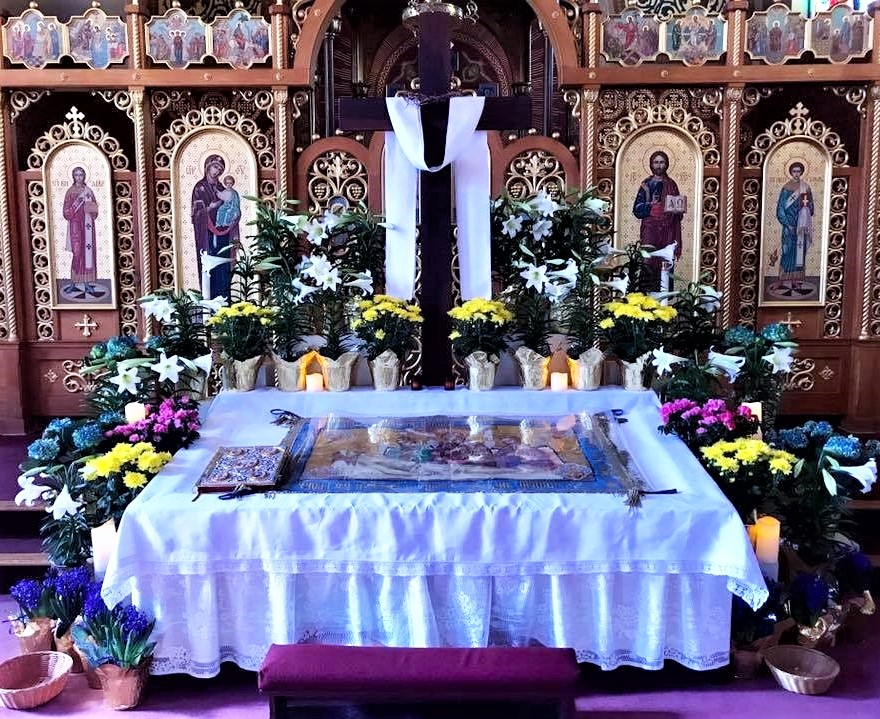 The faithful of St. Michael Church in Frackville, Schuylkill County, Pa., shows the beauty of the decorated tomb with the icon of Jesus in repose in the center of the church. Ukrainian Catholic churches such as St. Michael's set up similar tombs with the icon of Jesus on Good Friday until the Saturday evening Vigil Divine Liturgy or Sunday morning Resurrectional Matins service. (Photo courtesy the Metropolitan Archeparchy of Philadelphia)

Easter and the days leading up to it are easily the most important dates on the Christian calendar. But all Christians or even all Catholics may not celebrate it exactly as Roman Catholics do. And that has nothing to do with bunnies or eggs.

First off, Christians in most countries would find it strange to call this great feast of the Resurrection of the Lord, Easter. The name is believed to descend from that of a pagan goddess associated with spring in Germanic-influenced cultures including English, as odd as that seems.

All of these are perfectly valid, and these churches are in full communion with the Holy See. The Orthodox churches from which most of them descend are not are not in full communion but nevertheless they are recognized by the Roman Catholic Church as having authentic sacraments.

Easter is known as Pascha in the Byzantine Ukrainian Church and similarly named in most Christian churches and countries because the first Easter followed Passover and Jesus is the Paschal Lamb who willingly sacrificed himself for our sins.

While Byzantine Ukrainian Catholics celebrate a Paschal season somewhat different from that of Roman Catholicism the essentials are the same, according to Archpriest John Fields, the vice chancellor of the Metropolitan Archeparchy of Philadelphia.

“Our Lenten season ends the Saturday before Palm Sunday,” Father Fields said. But that doesn’t mean there is no fast during Holy Week. There is a stricter fast than in the preceding week although, as in Roman Catholicism, Sunday is never a fast day.

Other celebrations during the Paschal season are similar to those in Roman Catholicism even if the actual liturgies are different. On Holy Thursday the bishop washes the feet of 12 priests following the example of Jesus at the Last Supper.

On Good Friday there is a symbolic representation of the burial of Jesus. A procession carrying a shroud bearing the image of Christ on it leaves the church, circles it three times, re-enters the church and then reverently lays it in a flower-bedecked symbolic tomb in the center of the nave. A hymn in honor of noble Joseph of Arimathea, who donated a tomb for Jesus, is sung usually followed by an all-night vigil.

The Saturday morning service is called the Jerusalem Matins which is very much like a burial service. “It is a very moving and emotional service,” Father Fields said.

On the Saturday night service the priest at first wears dark vestments but before he preaches the Gospel he switches to brighter vestments, and the shroud that has been in the tomb is placed on the altar and will remain there until Ascension Thursday.

On Sunday the beginning of the Gospel of John is read, which begins with the very same opening words as Genesis: “In the beginning.”

PREVIOUS: In era of division, they break bread at interfaith seder meal

NEXT: Praying hands at work: St. Joseph’s parishioners roll up their sleeves