He’s young and ready to bring people to God 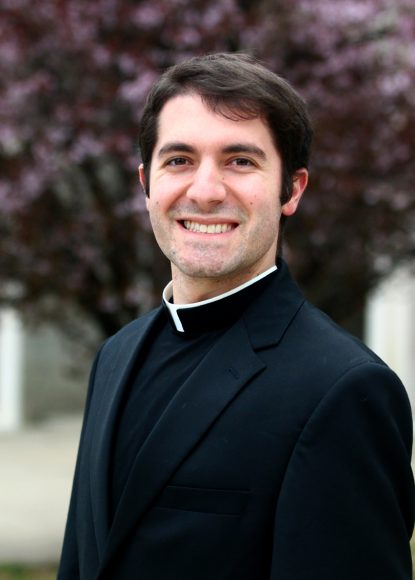 Deacon Alessandro Giardini will be ordained a priest for the Archdiocese of Philadelphia May 18. (Photo by Sarah Webb)

Third in a series of profiles on the seven men to be ordained priests for the Archdiocese of Philadelphia on May 18.

Time was, you could tell the age of most priests in the Archdiocese of Philadelphia if  you knew their ordination year. Just subtract 26 from that year and you had their birth year, give or take a year. That’s because bishops like Cardinal Dennis Dougherty, who entered a seminary at 14, liked to bring them in early, straight out of high school or younger. That doesn’t happen as often any more.

In that sense Deacon Alessandro Giardini, who will be ordained by Archbishop Charles Chaput on May 18, is a throwback in that he is just 26. But no, this is not something he was planning to do from the time he was a little kid.

He is the second child of Frank and Deborah Giardini in the family that would grow to six boys and one girl raised in St. Joseph Parish, Downingtown.

It was and is a seriously Catholic family. Sunday Mass at St. Joseph’s was a must, as was praying grace before meals, even in a restaurant, and so was family night prayer. “Sometimes on a road trip we would recite the rosary,” Alessandro recalls.

For his elementary school years he was home schooled, although some of his younger siblings attended Regina Luminis Academy of which his mother was one of the founders.

His high school years were spent at Bishop Shanahan High School and it was really in his senior year he began to seriously consider the seminary.

“I wanted to go to college and pursue a career as a reporter,” he said. “Maybe in TV news. Communicating the truth, letting people know what was going on in the world. I really didn’t want to be a priest because of the sacrifices.

“I guess what moved me to enter (the seminary) was seeing it as a way to bring my friends closer to God. It was much like you see in high schools and in the world today, religion is really a side part of life. I wanted those in my life to know God and how much he loves them.” 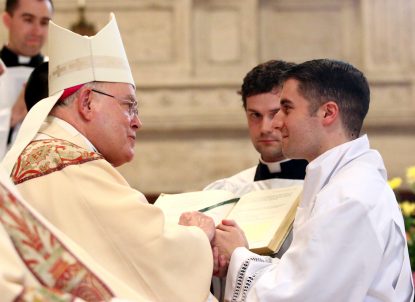 Archbishop Charles Chaput, ordaining Alessandro Giardini a deacon in 2018, will ordain him a priest on May 18 at the Cathedral Basilica of SS. Peter and Paul, Philadelphia. (Photo by Sarah Webb)

It was Father Matt Guckin, at that time campus minister at Shanahan and in residence at St. Joseph, who set Alessandro on the journey to priesthood. The priest suggested St. Charles Borromeo Seminary and the diocesan priesthood as the best path for him, Alessandro said.

“He was the one who first put it into my mind to become a priest,” Alessandro said. “One thing that came to me was I wanted to communicate the truth and there is no greater truth than the Gospel. From that point on I started to take the idea of the priesthood more seriously.”

Just because he entered the seminary in the fall of 2010 straight from high school doesn’t mean it was clear sailing to ordination. The seminary is really a place for both learning and discerning.

“The intensity of the program and rigor of the schedule was very demanding,” Alessandro said, “especially for a guy who was on the edge. Did I have a vocation for the priesthood? Did God want me to be there? I wanted to serve my friends and my family.” 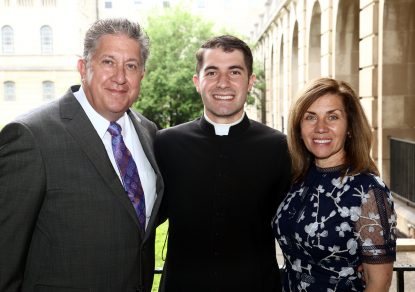 It wasn’t at all a matter of being disheartened by the clergy scandal that intensified during his seminary formation years. The worst thing was seeing others leave, men who told him they didn’t have the calling.

“They were good guys, much holier and priestly than I was,” Alessandro said. “I thought, ‘If God doesn’t want them, why does he want me?’”

Gradually, the self-doubts faded and it was “after the college years that I really felt that I belonged,” he remembers. “It was through questioning my own heart that I forced my discernment to go deeper.”

His deacon assignment at Our Lady of Guadalupe Parish in Buckingham was good preparation for his future priesthood, which begins at ordination next month.

He credits good priests along the way, including Father Guckin and Father Brian Kean, who was also a young priest in residence at St. Joseph Parish. There was also Father Frank Giuffre, who was his adviser during his seminary college years and who will be the homilist at his first Mass. 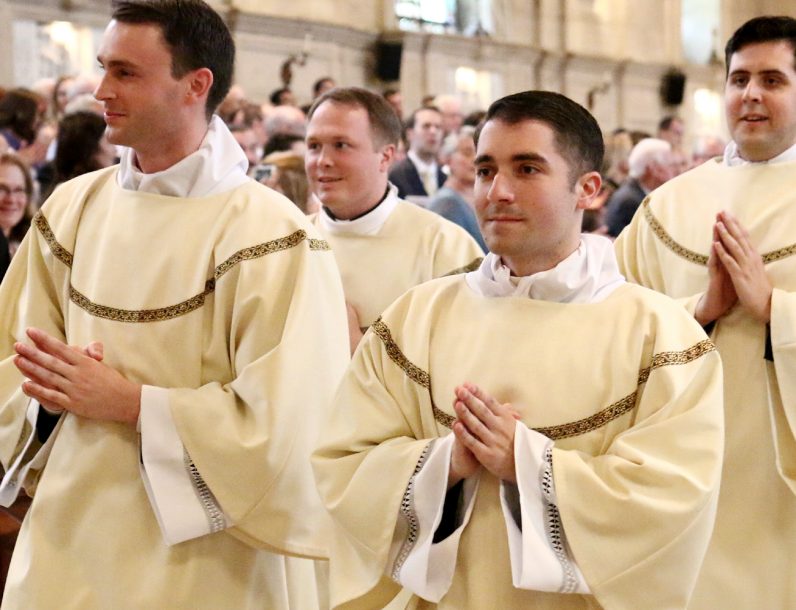 Alessandro Giardini (second from right) walks with his St. Charles Borromeo Seminary classmates at the conclusion of their diaconate ordination Mass in May 2018. They will be ordained priests May 18, 2019. (Sarah Webb)

PREVIOUS: Our man from Assisi: Road to priesthood brings him to Phila.

NEXT: Love of family, influence of priests leads him to ordination