Love of family, influence of priests leads him to ordination 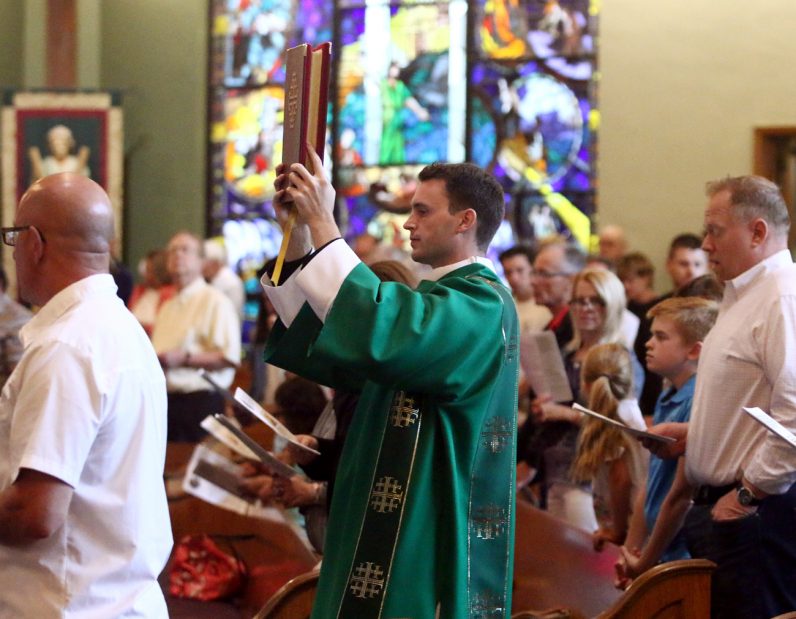 Deacon David O’Brien, who will be ordained a priest May 18, carries the book of Gospels in procession during a recent Sunday Mass at his diaconate assignment, St. Andrew Parish in Newtown. (Photo by Sarah Webb)

Fourth in a series of profiles on the seven men to be ordained priests for the Archdiocese of Philadelphia on May 18.

When David O’Brien was finishing up at Bishop Shanahan High School and looking toward his next move, maybe an engineering degree, he applied at 10 different colleges and was accepted at every one of them. Looking back, Penn State University, University of Delaware and Drexel University were the most appealing.

He could have saved his family a bundle of money in application fees plus time and travel with his very patient dad up and down the East Coast for college visitations because, in the end, he shocked everyone by opting for St. Charles Borromeo Seminary to study for the priesthood.

Not that the family was disappointed, they were thrilled. “My father was the biggest influence in my life,” he said. “He was very supportive. That meant a lot to me.”

David found the application process for the seminary was a lot more complicated than any of the others. Who else requires applicants to submit a 10-page autobiography, grills them on their thoughts about the Catholic Church and the Catholic faith, and requires them to undergo a psychological evaluation? 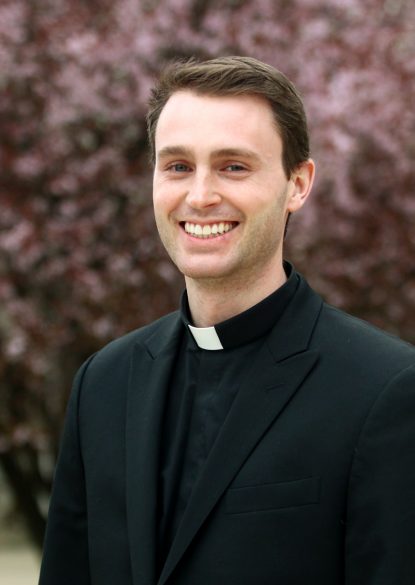 Deacon David O’Brien will be ordained a priest for the Archdiocese of Philadelphia May 18 at the Cathedral Basilica of SS. Peter and Paul. (Sarah Webb)

Now David, 27, is a transitional deacon ending his time at the seminary, and he will be ordained to the priesthood on May 18 by Archbishop Charles Chaput at the Cathedral Basilica of SS. Peter and Paul.

His journey began in rural Chester County where he was the second of the seven children of David and Bonnadette O’Brien. Their parish was St. Peter in Honey Brook, which had a tiny church in the middle of nowhere, and it has since moved to a new and much larger church in West Brandywine.

Father Bill Cox was the pastor, and David recalls that as a boy, he thought the priest “just radiated joy.”

It was in his boyhood that David first thought of becoming a priest. It was a fleeting idea that faded quickly but a seed was planted. St. Peter didn’t have a school and during part of his childhood he was both home schooled and attended St. Joseph, Downingtown.

Then it was on to high school. An active kid, he played basketball and soccer and ran on the track team. Golf wouldn’t come until his later seminary days, but that skill may come in handy if he ever has to do parish fundraising.

He also dated, had lots of friends but found time to be on the yearbook committee and student council, which may explain why he was accepted at those colleges. But one of his favorite activities is just being with family.

It wasn’t until his mid-senior year in high school that the desire for priesthood came back. Father Matt Guckin, school minister at Shanahan, counseled him to apply to St. Charles and just see where the Holy Spirit would lead. 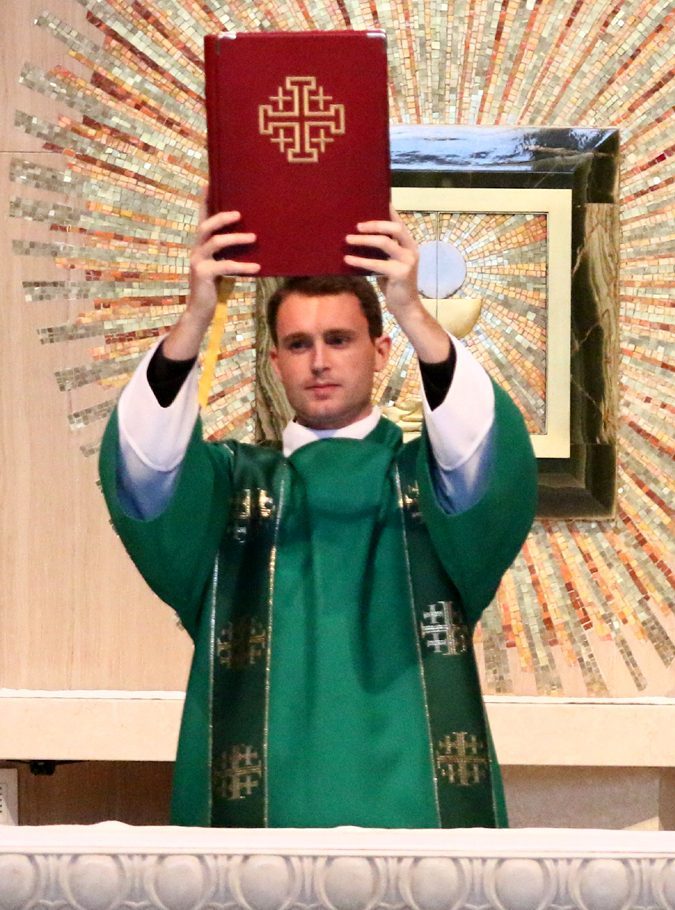 Deacon David O’Brien, who will be ordained a priest May 18, presents the book of Gospels during a recent Mass at St. Andrew Church, Newtown. (Photo by Sarah Webb)

David entered St. Charles at the same time as his classmate Alessandro Giardini, which says something about the school ministry program at Shanahan.

St. Charles “helped me to grow and deepen my faith,” David said. “It was part of my Christian journey.”

As other seminarians have said, one of the most difficult things was to see other men who seemed to be really made for the priesthood leave, but as time went on “I became more confident that God was calling me,” David said.

The spiritual year, a recent addition to the St. Charles program, “was really, really good,” he said. “It was a time to pray, to read the Bible, to enter into prayer in days of silence and working with the poor.”

He has just finished his transitional deacon year under the tutelage of Msgr. Michael Picard at St. Andrew Parish, Newtown. “He’s a wonderful man,” David said.

Others who have influenced him include Archbishop Chaput and his pastor at St. Peter Parish, Father Michael Fitzpatrick, who will be the homilist at David’s first Mass.

“I’m grateful to God for my vocation in this day and age when the priesthood is not on a high pedestal,” David said. “I hope to be a good priest through whom people can encounter Christ.” 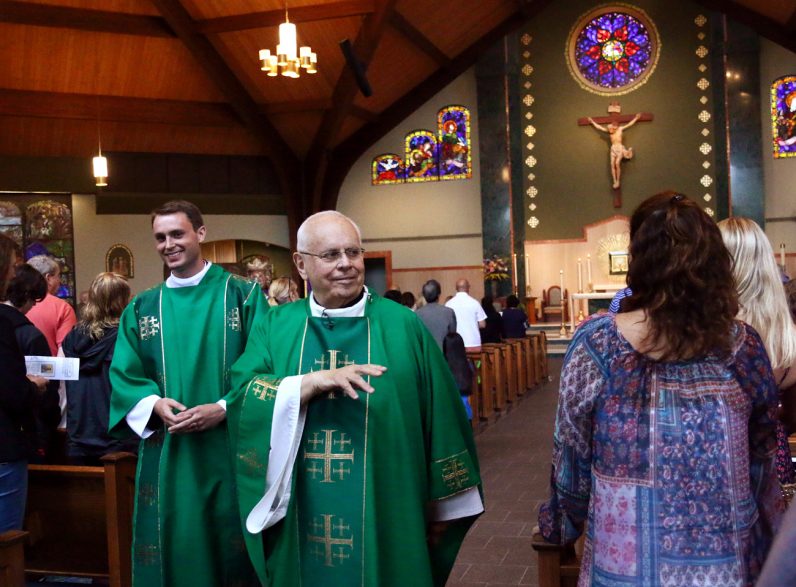 Deacon David O’Brien walks in the recessional after Mass with Msgr. Michael Picard, pastor of St. Andrew Parish in Newtown. Deacon O’Brien has served a year in ministry as a deacon at the Bucks County parish. (Sarah Webb)

PREVIOUS: He’s young and ready to bring people to God

NEXT: Childhood dream of priesthood wavered but never waned