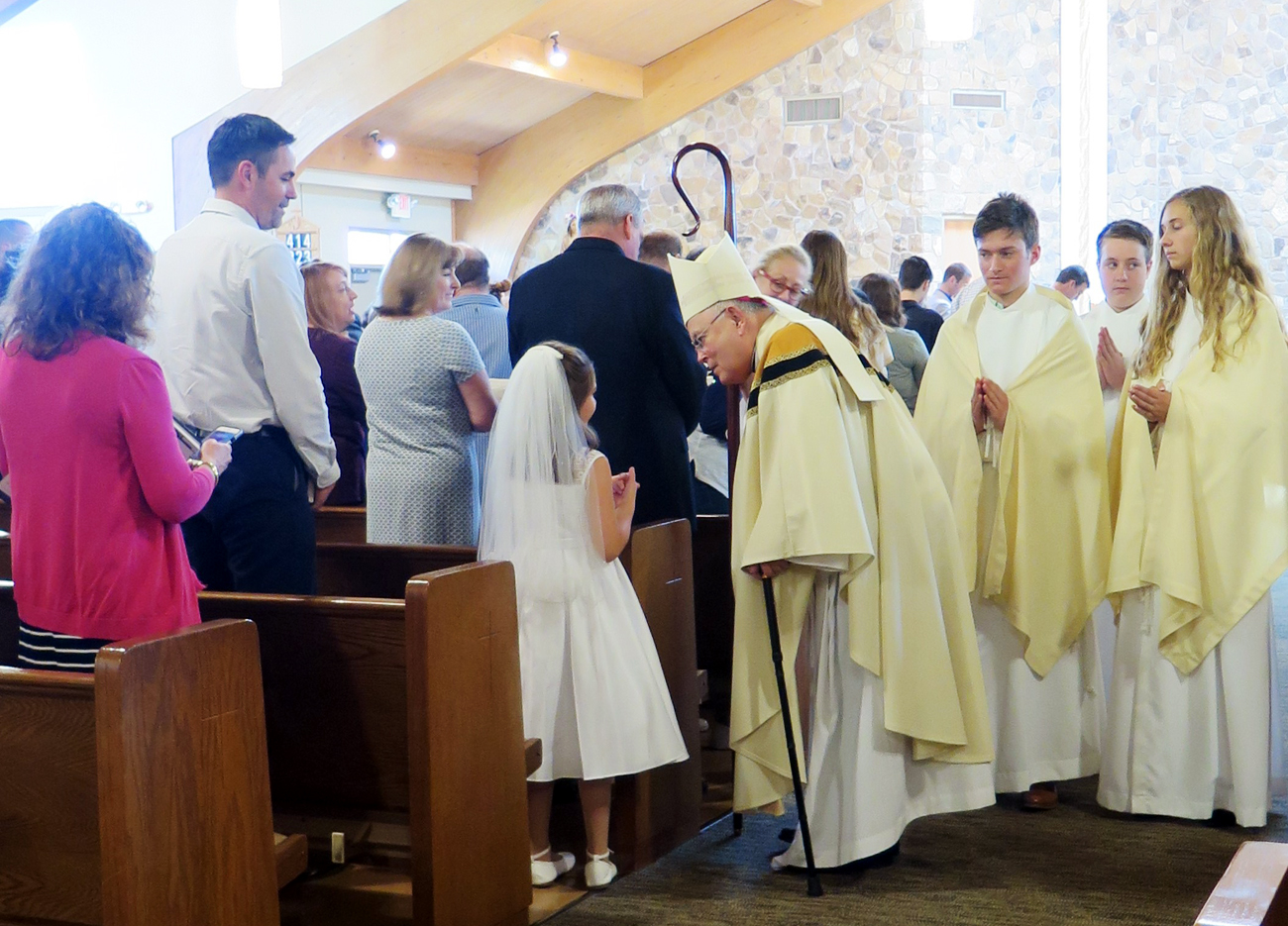 St. Thomas More Parish in South Coventry, which closed out its year-long 50th anniversary observance with a Mass celebrated by Archbishop Charles Chaput on Sunday, May 19, was really founded in 1968 and Father Joseph Bonawitz, the founding pastor, celebrated his first Masses at the Old Coventryville School House, according to an archdiocesan history.

Although the parish is in Chester County it was an offshoot of St. Aloysius Parish six miles away in Pottstown, Montgomery County.

A permanent church was sufficiently constructed that a first Mass was celebrated in it on Dec. 21, 1969 and it was formally dedicated by Cardinal John Krol on Oct. 3, 1970.

Since then the parish has been doing very well, according to Father Edward Brady, the current pastor.

“It’s a strong parish, the people are very helpful, and we work together as a team,” he said. “We just had a renovation and the people raised the money very quickly and got it done.”

For this he credits a very good finance council, as well as many active groups including a parish-based Knights of Columbus Council and Ladies Auxiliary and also a Neocatechumenal Way community.

Mass attendance is more than 500 weekly, baptisms are up slightly and there are about 137 kids in the PREP program, not counting those who might be attending area parochial or regional Catholic schools or Catholic high schools.

(See a photo gallery of the May 19 anniversary Mass, which was celebrated by Archbishop Charles Chaput.)

“It’s a growing area and we have a nice balance in population; the future looks OK,” Father Brady said.

Linda Slatcher, a member of the parish for more than 30 years, has nothing but good things to say about the pastors they have had over that time.

She especially remembers Father Hugh Dougherty, now pastor emeritus and how helpful he was to her when her husband passed away. “He helped me so many ways,” she said, “and when he preached it seemed like he just was talking to me.”

More recently Father Brady was faced with a major renovation of the rectory caused in part by a broken pipe and he had to temporarily relocate his residence but “he has been up to the challenge,” she said.

Charles Palladino was not a founding parishioner, but he arrived in 1972 and well remembers Father Bonawitz and the church as it was originally built.

“It was just a big box; now it has a lot more character,” he said. Father Bonawitz’s main work was to cut down the mortgage and he succeeded in that.

The way he did it was very much in the Catholic tradition: bingo. “Every Sunday after Mass we would have bingo and the church paid the mortgage off very quickly,” Palladino said.

Under Father John Kline, the second pastor, the parish doubled to about 1,200 families, but the number was reduced after St. Elizabeth Parish, Upper Uwchlan, was established in 2000 partially from St. Thomas More’s territory.

After his sudden death in 1996, he was succeeded by Father Dougherty and now by Father Brady.

Over the years there have been many additions and renovations to the parish property, but one thing has remained constant: “It is just a wonderful parish,” Palladino said.

PREVIOUS: Philadelphia cops aided by faith in line of duty