Philadelphia cops aided by faith in line of duty 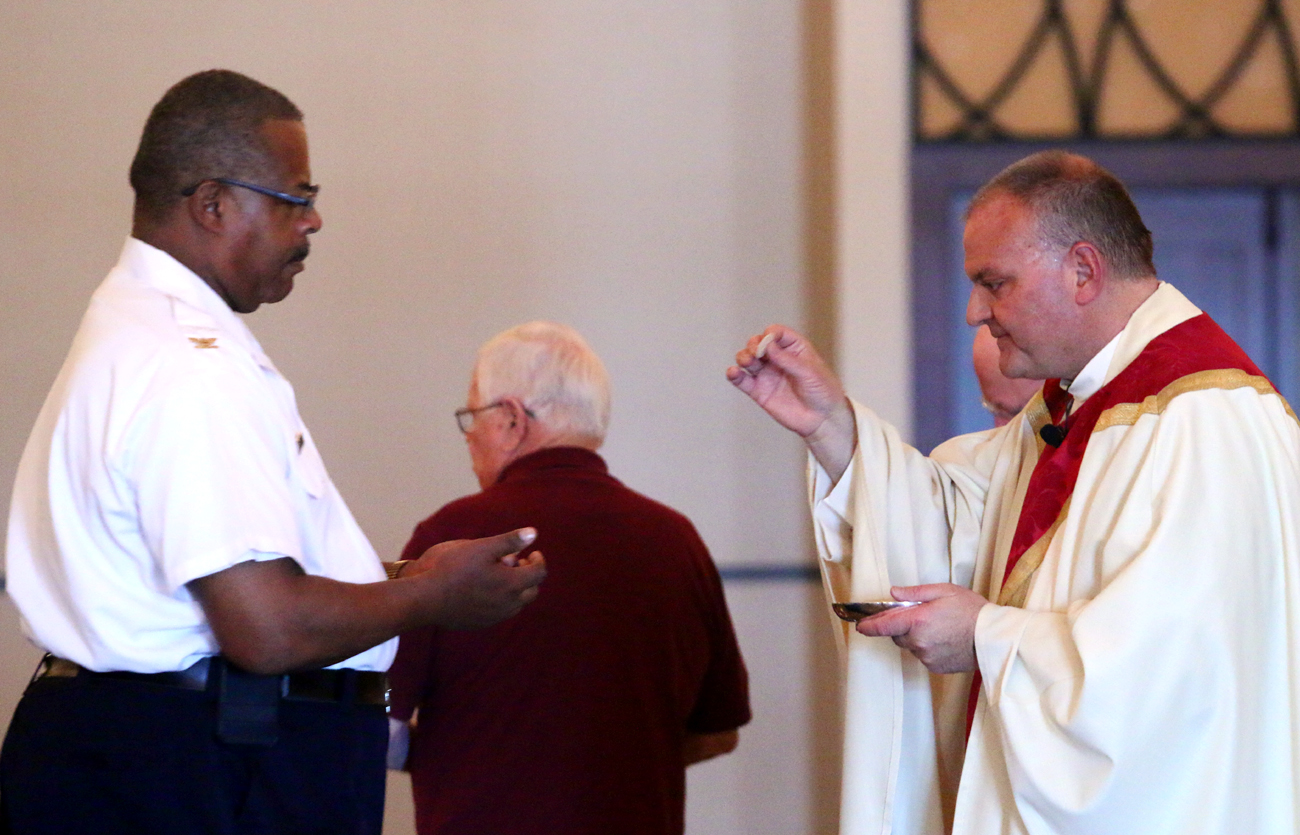 Oblate Father Steven Wetzel, chaplain of the Michael the Archangel Ministry at the Philadelphia Fraternal Order of Police Lodge 5, gives holy Communion to Chief Inspector Carl Holmes during a May 2 “Blue Mass.” The liturgy, which coincided with National Police Week, honored fallen, active and retired members of the city’s police department. (Photo by Sarah Webb)

Local law enforcement officers were honored during a Mass held earlier this month at the Philadelphia Fraternal Order of Police (FOP) Lodge 5 in Northeast Philadelphia.

More than 60 retired and active duty officers, along with family and friends, gathered at the May 2 liturgy to remember deceased, retired and active members of the Philadelphia Police Department. Oblate Father Steven Wetzel, the celebrant, said the assembly marked the first “Blue Mass” at FOP Lodge 5, and prefaced this year’s National Police Week (May 13 to 19).

“It’s important to come together as a faith community and to have that dialogue with the Lord, asking for protection and blessing,” said Father Wetzel, who serves as chaplain of the Michael the Archangel Ministry Program at the lodge.

Named for the patron of police officers, the outreach provides pastoral care, crisis ministry and spiritual enrichment opportunities. Services include hospital visits, bereavement support, funeral rites and pastoral counseling to some 14,000 active and retired Philadelphia Police Department members, as well as their families.

“The archbishop had no idea we had so many police officers here in the city,” said Father Wetzel. “He said to me, ‘That is a huge, huge parish.’ And we use that language; it really is a parish.”

According to Father Wetzel, the Catholic population of the Philadelphia Police Department is about 69%, something he attributes to the “traditionally deep Catholic and Christian roots” in the city, and to the strength of its Catholic high schools.

At the same time, Father Wetzel stresses that his ministry is “multidenominational, rather than nondenominational.”

“People in our department who have other faiths or even no faith are still ours,” he said. “They belong to me, and they have our support and our resources.” 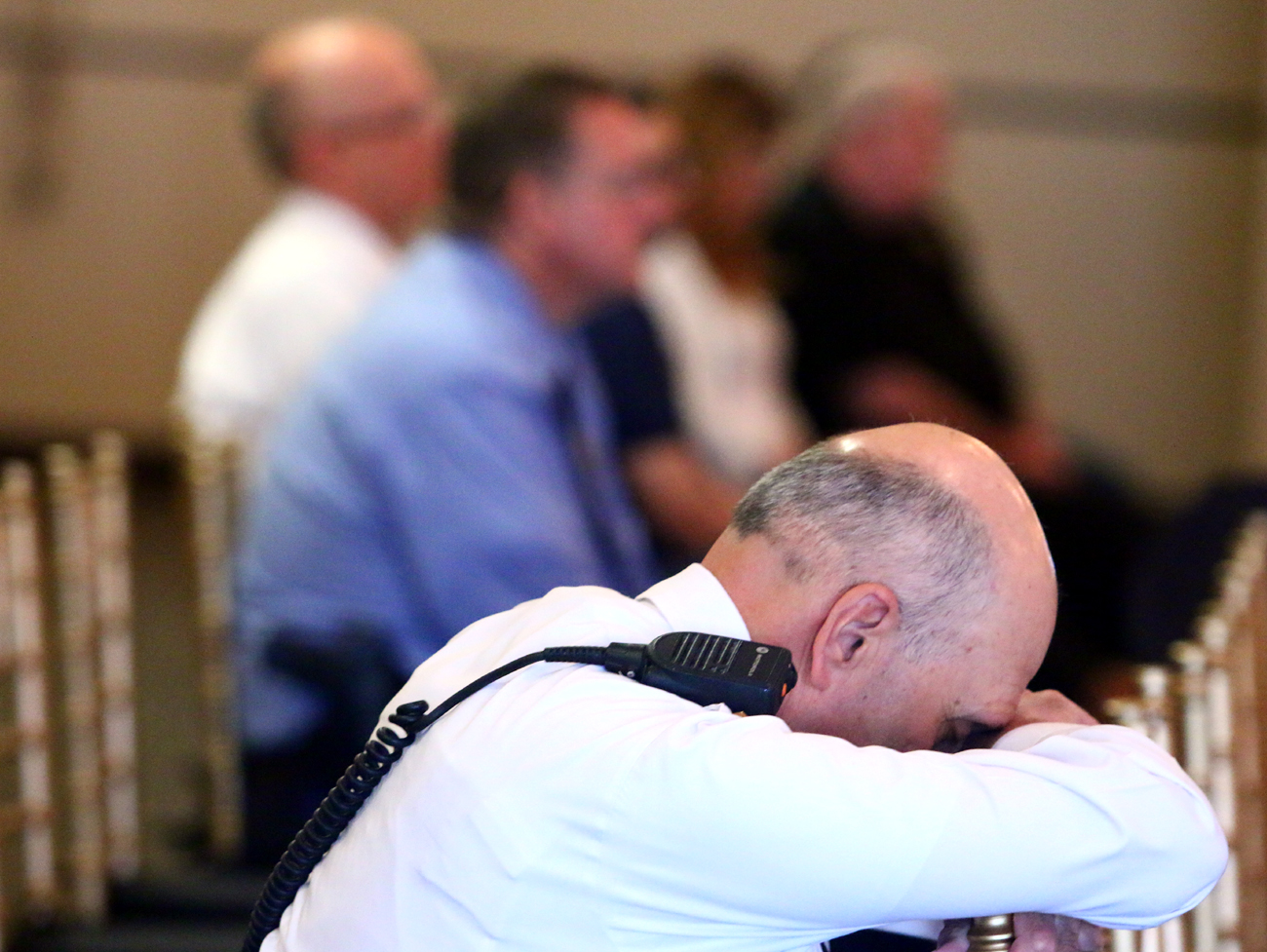 Such openness is possible through what Father Wetzel calls the cor ad cor or “heart to heart” approach favored by St. Francis de Sales, the patron of the religious order to which he belongs.

“We get to know the person first, and then in times of crisis or celebration, they’ll come forward and say, ‘Can I talk to you?’” said Father Wetzel. “There’s a trust there.”

FOP president John McNesby described Father Wetzel as a true “father figure” to the officers who fulfills “an enormous role while remaining an ordinary, approachable person.”

As part of his ministry, Father Wetzel regularly accompanies officers during “last out,” the overnight shift, where the police car can become a kind of confessional — one that can even lead to the baptismal font.

“I’ve had a couple of folks on my ridealongs who have found themselves interested in the faith,” said Father Wetzel. “I prepared an officer through RCIA (Rite of Christian Initiation for Adults) here at Lodge 5, and later baptized and received him into the church.”

Faith and law enforcement have long been interconnected, especially in the United States.

The Blue Mass tradition, so named for the popular color of police uniforms, was started in 1934 by Father (later Monsignor) Thomas Dade, founder of the Catholic Police and Fireman’s Society and chaplain of the Washington, D.C. police and fire departments from 1934 to 1959.

A spiritual foundation can help those in law enforcement find healthier ways to cope with the often traumatic nature of their work, said Sgt. Mike Cerruti, who is the chairman of the board for the Michael the Archangel Ministry.

“When I first came onto the force, a lot of officers dealt with seeing violence in a very harmful way, often by drinking to forget it,” said Cerruti, noting that Father Wetzel even celebrates a 4 a.m. Mass twice a month at St. Matthew Parish in Philadelphia for the city’s police officers. “We now have a lot of officers who will pull Father Wetzel aside, just to talk about what they’ve seen and been through.”

The Catholic faith in particular has given Chief Inspector Carl Holmes empathy and compassion for those whose situations require his intervention.

“The first thing I say before Mass when I get down on my knees is ‘God, I am a flawed individual; please help me along this journey,’” said Holmes, a convert to Catholicism and now a member of Holy Cross Parish in Philadelphia.

Holmes added that his faith helps maintain his perspective on the difficult task of having to use occasional force in the line of duty.

“If we can make that a minimal force, and do that from a point of lawful rather than punitive intervention, we can see it as a force that’s necessary to keep the peace,” said Holmes.

For Holmes, police work is a call to “follow the examples of Jesus Christ and the Apostles” through “servant leadership, prayer and putting the creed into actual action.”

Michael’s Brigade, part of the Michael the Archangel ministry, allows him and fellow officers to do just that through volunteer service.

“We have a very close connection with St. Francis Inn in Kensington,” said Cerruti, noting that younger officers in the group have spearheaded efforts to provide the soup kitchen with sandwiches and toiletries.

According to Capt. Louis Campione, prayer and works of mercy are the two wings that power the Michael the Archangel ministry, and police work as a whole.

“Faith is absolutely the foundation of our work, and you live it every day,” said Campione, a member of St. Richard of Chichester Parish in Philadelphia. “Our role as police officers is to do as much good as you can, for as many people as you can, for as long as you can. So the Catholic faith is central to doing that and to winning in that mission.”