Couples recall how their marriages endured through the years 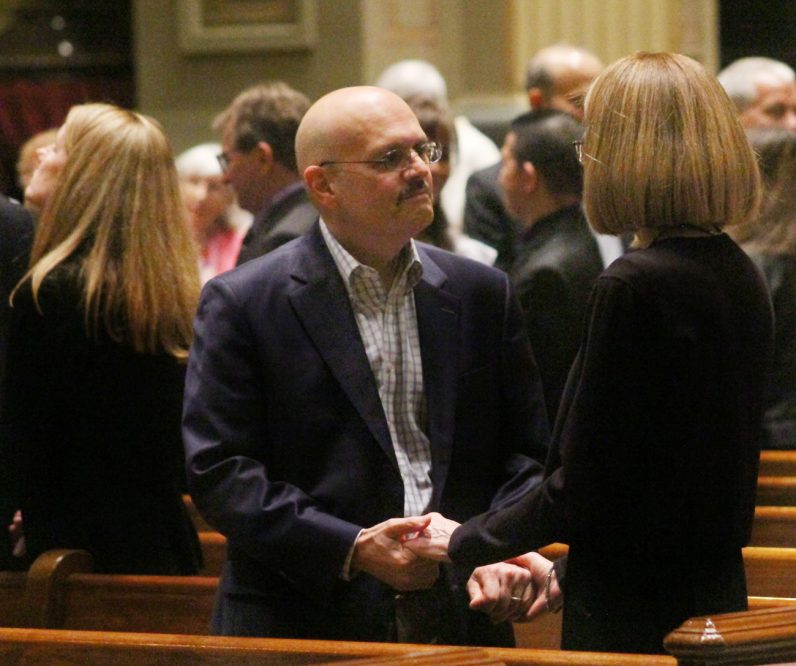 In a tradition that traces back to when Cardinal Krol was Archbishop of Philadelphia, couples who were married 50 years or more and 25 years or more were honored at the 5:15 p.m. vigil Mass on Saturday, May 4 at the Cathedral Basilica of SS. Peter and Paul, with Archbishop Charles Chaput as the principal celebrant.

Also couples married less than five years were invited to participate at the Mass that included a renewal of marriage vows.

(See scenes from the Mass in our photo gallery.)

“One of the disturbing things we have in the 21st century is that we have fewer and fewer weddings every year,” Archbishop Chaput said. “Part of that is that people don’t get married as much anymore, they just live together and have children. They are not as committed to the church as you are, and they don’t get married in the Catholic Church.”

Of course this was a Mass for the married faithful, even if the numbers are somewhat diminished. The archbishop took note that it is celebrated in the Easter season.

Quoting from the Collect of the Third Sunday of Easter, he said, “May your people exult forever, O God, in renewed youthfulness of spirit.”

Easter, he said, “is a time when we celebrate the newness of the church. We believe that Jesus gives us new life through his death and resurrection. The reason for this anniversary Mass for you who are married is to renew your commitment to one another. Remember what it was like 50 years ago, 25 years ago?”

(Listen to a CatholicPhilly.com podcast explaining why the sacrament of marriage is central to family life and to the church as a whole.)

The answer was clearly “yes” as the couples in unison renewed their marriage vows and sealed them with a kiss.

Commenting afterwards on the secret of a long marriage, everyone was pretty much on the same page.

Linda and Ed Doran of St. Maria Goretti Parish in Hatfield, married just three years, were in agreement: “The secret is forgiveness most definitely, and commitment,” they said.

“It’s to stay in love, and always tell the truth,” said Bill and Margie Levy of St. Thomas the Apostle Church, Glen Mills.

Joe and Joanne Russo of St. Joseph’s in Collingdale are married 50 years. Both from South Philly, they met at a Bishop Neumann High School dance when they were 16.

The funny thing is they unknowingly met previously in 1946 — or at least their mothers did — when they were born six days apart in Jefferson Hospital.

“Patience and marrying the right person” is the secret, they agreed.

Charles and Ayde Perez, of St. Joseph Parish in Warrington, also married a half-century, were in agreement. “Compromise and respect,” they said.

To that, one could add the commandment of Jesus: “Love one another as I have loved you.”

NEXT: Archdiocesan staff ‘walk the talk’ on ending hunger