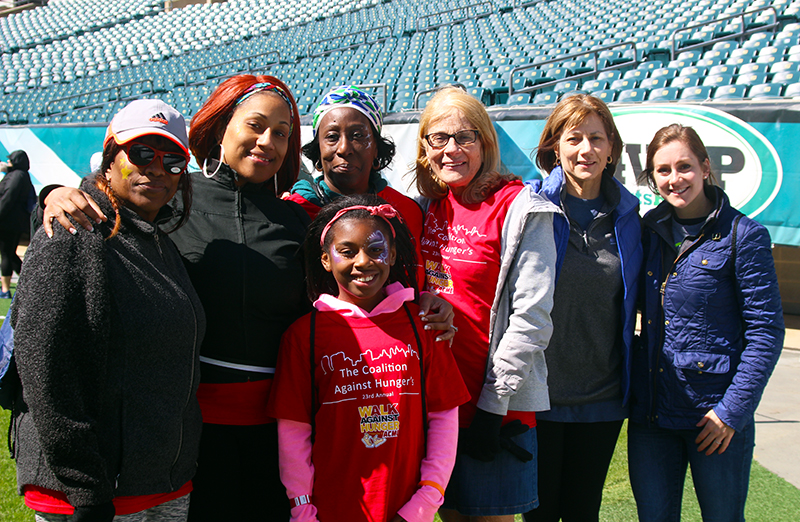 Staff from archdiocesan Nutritional Development Services (NDS) joined friends and family at the 23rd annual Walk Against Hunger, April 27. A portion of the fundraiser’s proceeds will support the agency’s ongoing mission to provide over 2 million meals per year to food-insecure area residents. (Photo by Gina Christian)

Several employees from archdiocesan Nutritional Development Services (NDS) put on their sneakers April 27 to “walk the talk” about ending food insecurity in the greater Philadelphia area.

The NDS staff and their families joined hundreds of volunteers to support the 23rd annual Walk Against Hunger, a fundraiser sponsored by the Coalition Against Hunger and presented by Acme Markets. Participants paid a registration fee and solicited online donations prior to walking laps around and within Lincoln Financial Field in South Philadelphia.

The event typically generates approximately $200,000 for anti-hunger organizations in the Philadelphia region. A portion of the funds raised by NDS through a dedicated online link will be used to combat hunger through the NDS Community Food Program, with the remaining 20% going to the Coalition.

For NDS executive director Lizanne Hagedorn, the April 27 walk was a chance “to give a human face” to institutional organizations working to combat hunger.

While Philadelphia has experienced significant renewal and investment, the city’s poverty rate has stubbornly remained at approximately 26% for the past five years, according to the Pew Charitable Trusts’ “Philadelphia 2019” report of April 11. Almost 400,000 residents live below the poverty line.

An analysis of federal data by Hunger Free America indicated that the city’s hunger rates rose 22% from 2012 to 2017.

“NDS has been involved with this walk since day one,” Ayella said, noting that the archdiocese had provided office space to the Coalition Against Hunger when it formed in 1996. “It’s a great public witness that our community cares about neighbors who are hungry.”

“We have certain resources and opportunities and talents, and so do other groups that come into this space,” she said. “We welcome differing opinions and ideas, and we really try to support one another in our missions, because we’re so much stronger together than we are apart.”

Hagedorn also pointed out that NDS has been “blessed with a real longevity of personnel” who remain committed to the agency’s mission “for the long haul.”

“I’ve done this walk before, and I’m here with my family because I like supporting anything that helps to do good,” said Newman, who attended the walk with her daughter, granddaughter and sister, as well as several members of her church’s congregation. “I can’t wait until the next one.”

PREVIOUS: Couples recall how their marriages endured through the years

NEXT: ‘Wizard of Oz’ shows its actors are ‘more than their disabilities’