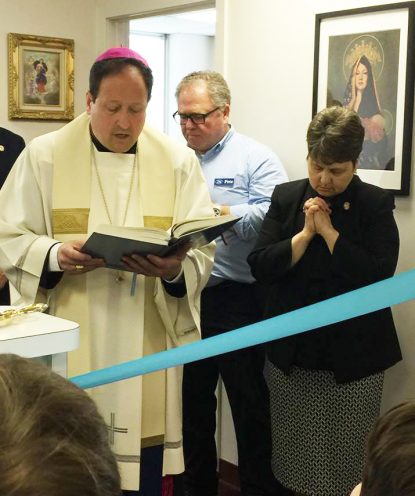 Bishop John McIntyre leads a blessing for the Gianna Center of Philadelphia’s new location in East Norriton on April 26, joined by with board member Pete Rawson (center) and nurse Barbara Rose.

The Gianna Center of Philadelphia formally opened its doors to provide women with gynecologic care and natural family planning after an open house and blessing of the center’s new facility in East Norriton by Bishop John McIntyre on Friday, April 26.

More than 50 friends, patients and supporters were on hand, including Anne Nolte, executive director of the National Gianna Center in New York City; Montgomery County Commissioner Joe Gale and representatives of the Knights of Columbus Holy Family Council #3327, who presented a check for $5,000 they had raised for the Gianna Center at an event in Bridgeport last month.

Exam rooms in the new office have been dedicated to John and Harriet Stanton, and to the Knights of Columbus in recognition of their extraordinary support.

Earlier this spring, regional councils of the Knights generously donated the cost of an ultrasound machine for the Gianna Center through a matching grant program from the Supreme Council’s Culture of Life Fund.

The Stantons are long-time bastions of the Philadelphia pro-life community whose commitment has extended to the establishment of this center for women’s reproductive health.

The office is led by Dr. Delia Larrauri, who is fluent in English and Spanish. Nurse practitioner Barbara Rose is a certified FertilityCare Practitioner who has been providing instruction in the Creighton Model FertilityCare System to women and couples in the Philadelphia region since 2004.

From April 2018 through March of this year, the Gianna Center of Philadelphia operated out of the offices of Dr. Max Mercado at Jeannes Hospital in Northeast Philadelphia.

The new East Norriton facility is one of 15 Gianna Centers affiliated with the National Gianna Center to provide pro-life gynecologic care in accordance with the United States Conference of Catholic Bishops’ 2009 document “Ethical and Religious Directives for Catholic Healthcare Services.”

NEXT: New museum for St. John Neumann opens at his shrine