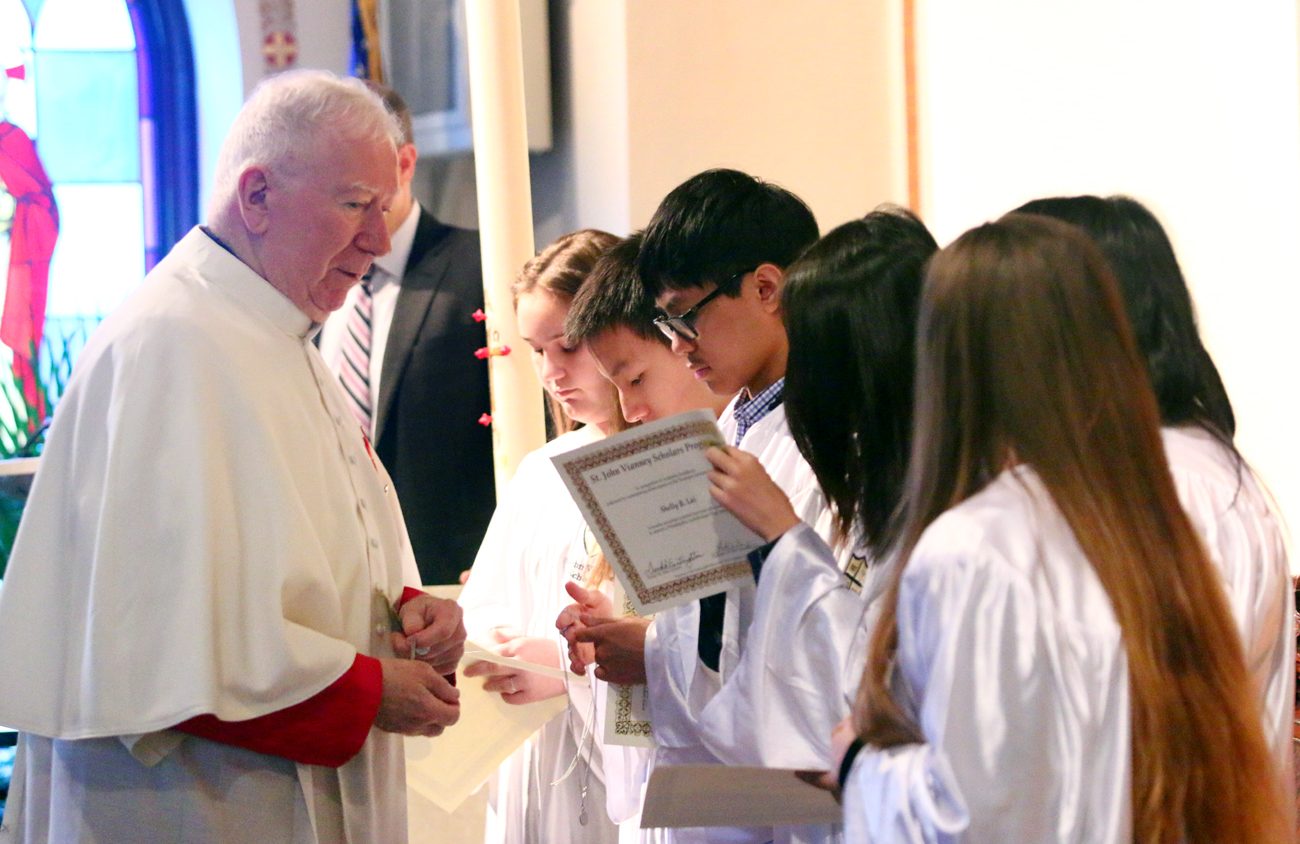 But their Catholic high school education is being subsidized by partial scholarships to the tune of $3,000 per year for a total of $12,000 each by the St. John Vianney Parish community. Over four years, that is a commitment of $96,000.

All of this year’s awards were formally announced at a Sunday Mass April 28 at St. John Vianney.

How the awardees are chosen is ingenious. Rather than reinventing the wheel, the St. John Vianney Scholars Program with permission piggybacks on the Connelly Foundation’s Neumann Scholarship Program.

The St. John Vianney Scholars are chosen from the candidate pool that did not win a Neumann Scholarship, but by the nature of the test they are clearly excellent academic achievers and future college material. 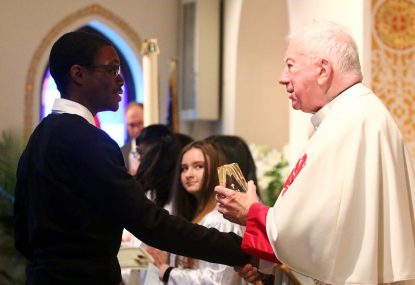 As a matter of fact, the St. John Vianney scholars who have grade point averages of 94% have after high school gone on to such institutions as the University of Pennsylvania, Drexel, Penn State, Temple, La Salle, Haverford and the University of the Sciences, among others.

As is the case with the Neumann Scholars, the St. John Vianney Scholars also receive ongoing nonmonetary support throughout their high school career.

Unlike the Neumann Scholars Program, which embraces candidates from all Catholic grade schools throughout the entire Philadelphia Archdiocese, eligibility for the St. John Vianney Scholarships is generally limited to applicants from parish or regional Catholic elementary schools in Philadelphia itself. But the candidates can choose any of the archdiocesan high schools throughout the five counties.

“Our target focus is the inner city,” said Michael Greenly, who chairs the Charitable Committee at St. John Vianney Parish.

Some of the elementary schools listed might not be considered “inner city” because in Philadelphia the term denotes a socio-economic area rather than a geographic area. In such enclaves of wealth as Chestnut Hill or Society Hill actual residents tend to send their children to private academies, not the local public or parochial school. Most of the children attending such parochial schools do not live in their immediate area.

While $3,000 per year only supplies a portion of the necessary tuition it may be enough to make the difference. In addition, the St. John Vianney scholars may be eligible for further aid packages offered at their chosen high school, provided total aid does not exceed tuition cost, Greenly explained.

Of the 32 St. John Vianney scholars who have now completed their high school education, “all have gone on to college,” according to Greenly. In many cases, he said, “the kids in the St. John Vianney program will be the first member of their family to ultimately attend college.”

Considering there are eight new scholarships every year there could be 32 students receiving the $3,000 in aid in any given year. That amounts to $96,000 a year, not counting funding for the ongoing support programs.

“A lot of our parishioners do things anonymously,” Greenly said. “We have families who work in our food bank, and we felt that if we help children receive a quality education that will come back to the community in the future.” 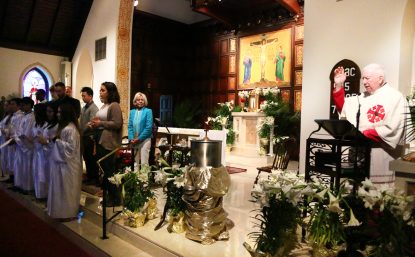 Among the most ardent financial supporters of the program is parishioner Cosmo DeNicola. A successful entrepreneur in a multiplicity of fields, he is the descendent of post-World War II Italian immigrants and he grew up in the city’s Port Richmond section where he attended Mother of Divine Grace School followed by Northeast Catholic High School.

He credits his Catholic education with giving him “a strong awareness of Jesus and a recognition that Jesus is always with us in good times and bad,” he said. “The structure that came from my Catholic education turned me into an organized adult and that helped me in my career.”

The demographics of Gladwyne show it a prosperous community. But still, St. John Vianney is not a large parish. How can it afford to give this amount of money every year to help less fortunate families outside of its boundaries?

“Our parish is very supportive of this program so kids can go to a Catholic school,” said Msgr. Donald Leighton, pastor of St. John Vianney. “It’s an extraordinarily wonderful program, and we had a lovely event on Sunday.”

Fortunately, the parish does not have to raise that full amount every year. A good part of it comes from interest on an endowment fund set up from the sale of property after St. Justin Martyr Parish in nearby Narberth was merged into St John Vianney a decade ago.

In addition to the scholarships, St. John Vianney also gives $5,000 each to 10 struggling parishes every Christmas. “We will do this as long as we can,” Msgr. Leighton vowed.

At St. John Vianney those are not simply words in a book.

The following are this year’s St. John Vianney Scholars, including the high school they will attend and the grade school from which they graduated:

The following are this year’s graduating seniors who have been St. John Vianney Scholars, including their high school and grade school: 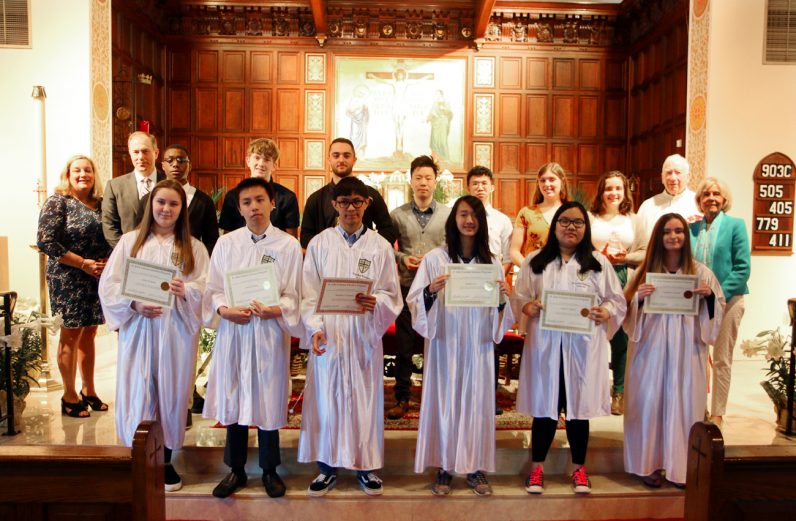 The new St. John Vianney scholars pose with their certificates, flanked by seniors who attended an archdiocesan high school with help from the program, along with parish supporters. (Sarah Webb)

PREVIOUS: Love never fails: How a wife coped and her husband forgave

NEXT: To avoid burnout, priests advised to abide in the Lord