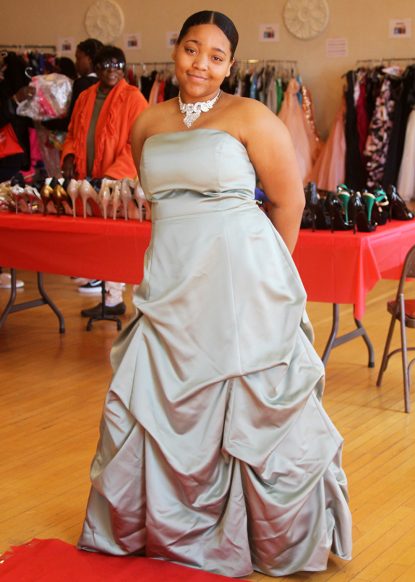 Several teens in Northeast Philadelphia are attending prom in style, as their parents breathe a sigh of relief that the annual dance hasn’t broken the family budget.

The event was sponsored by Catholic Community Services (CCS), an agency of archdiocesan Catholic Social Services (CSS) that supports families through an array of programs and initiatives.

“We like to do this because it’s a way to help reduce the costs of prom,” said CCS administrator Teresa Thompson. “Even though they still have to buy prom tickets, we can help teens with the dress and the accessories.”

Prom costs have risen steadily, causing many youth from lower-income families to sit out the big dance. In recent years, the average price tag — including attire, accessories and transportation — has ranged anywhere from $600 to more than $1,100, according to national surveys by Visa and Yahoo. Teen Vogue’s suggestions for this year’s affordable gowns start at $100; shoes, hair, makeup and accessories can easily double or triple that figure.

CCS partnered with a number of area organizations for the outreach, which featured more than 350 outfits from which teens could choose.

Students from St. Hubert Catholic High School for Girls collected more than 60 gently used dresses, and several CCS staff opened their own closets for contributions. The clothing racks were also filled with donations from Zeta Phi Beta sorority and from Jewish Family and Children’s Service of Greater Philadelphia, which supplied items it had received for a similar dress exchange.

Following a continental breakfast, each teen was paired with a personal shopping assistant. Hair and makeup styling were offered, as well as a turn on a red carpet before a balloon arch, where attendees posed for selfies as a DJ played the latest pop music singles.

Tanya Willoughby, whose daughter Ebony selected a dress, described the event as “one-stop shopping” that was a “perfect program for young ladies and young men who are graduating.”

“My daughter is extremely picky, and I said, ‘This is where she’s coming; I’m not buying a new dress this year,’” said Mitchell.

Her daughter Gianni said her prom costs this year had doubled, since she was invited to two dances — neither of which she wanted to miss.

“Prom is memorable,” said Mitchell, a student at Wissahickon High School in Ambler.

The exchange also provided CCS with a way to connect with teens and to better understand the needs and challenges they face. Based on these conversations, staff are now exploring additional sponsorships for next year’s event.

For CCS community liaison Ginger Smith, the prom is an opportunity to celebrate youth at a key moment in their lives, and to support them as they move into adulthood.

“This is a fun time, and it’s a family affair — it’s the village coming together for young people,” said Smith. “Some people say, ‘Why are you making such a big fuss?’ But this is once-in-a-lifetime, and before they move on in life, why not let them enjoy this moment?” 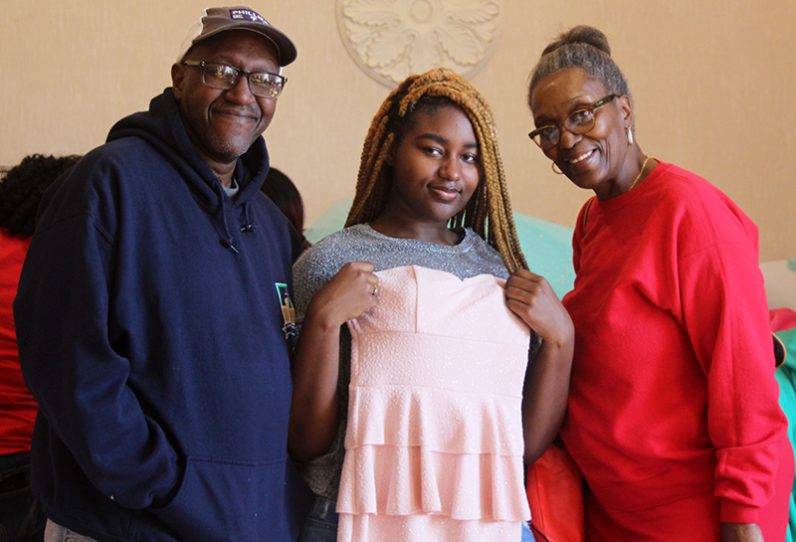 Ebony Willoughby (center) holds up a gown at the third annual Prom Gear Exchange, which she attended with parents Deacon Anthony and Tanya Willoughby. Sponsored by archdiocesan Catholic Community Services, the April 27 event outfitted dozens of area teens for the dance while offering family fun. (Photo by Gina Christian)

NEXT: Students learn about missions from missionaries themselves