Students learn about missions from missionaries themselves 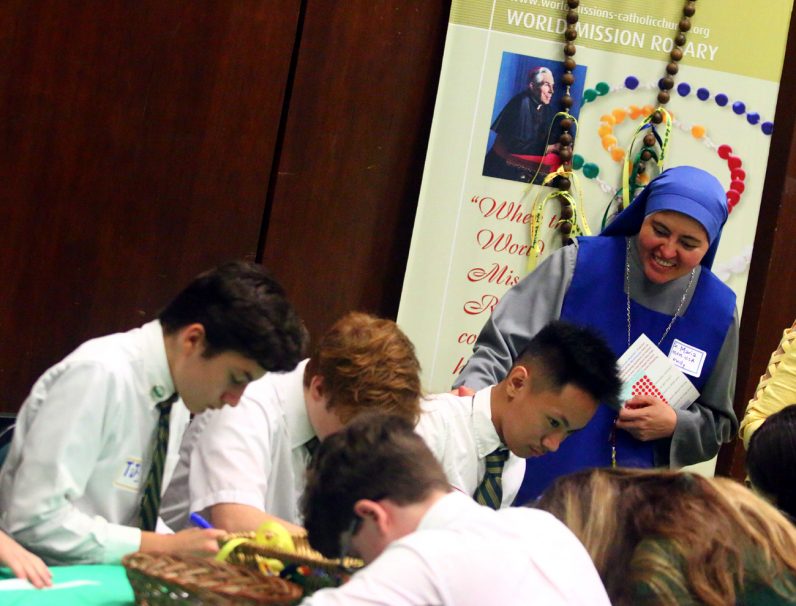 Students write their prayer intentions on ribbons to be included with the rosaries students made during the inaugural Archdiocesan Mission Day May at the Archdiocesan Pastoral Center, Philadelphia. (Photo by Sarah Webb).

Students from eight Catholic schools learned about the missionary work of the church in the world during an event May 6 at the Archdiocesan Pastoral Center in Philadelphia.

The inaugural Mission Day gathered about 65 children from across the Archdiocese of Philadelphia during the Extraordinary Year of the Missions in the archdiocese. They made craft projects and heard from representatives of five women’s and men’s religious orders and their work to spread the Gospel.

(See a photo gallery of scenes from the day here.)

The projects, which aimed to raise awareness of mission activity, included creating photo collages, writing prayers with a mission intention and making multi-colored rosaries to signify various regions of the world.

The morning program began with a welcome by Msgr. Arthur Rodgers, director of archdiocesan Pontifical Mission Societies, who told the children the day was a great opportunity to learn about the church’s missionary activity and share in it.

“We’re hoping you will take back some of these ideas to your own schools and parishes,” he said.

The participating schools were Christ the King, St. Francis de Sales, St. Monica and St. Peter the Apostle, all in Philadelphia, and St. Helena in Blue Bell, St. Ignatius in Yardley, St. Margaret in Narberth and St. Michael in Levittown.

The religious speakers told of their own or their congregation’s missionary work. Typical was Mother Mary Incarnation of the Servants of the Lord and the Virgin of Matara along with two sisters.

In addition to the sisters’ service in the archdiocese at St. Rocco Parish in Avondale and St. Veronica in Philadelphia, the order is present in 36 countries which are “really cool places but also really poor places where we also help kids just like you,” Mother Mary Incarnation said.

“We have schools and we have homes for children and we want to bring the love of Christ to all we meet,” she said.

Also speaking of their work were Sister Lisa Valentini of the Missionary Sisters of the Most Sacred Heart of Jesus, Sister Ellen Anderson and Sister Ifoema of the Missionary Sisters of the Holy Rosary and Sister Catherine Msuya of the Holy Spirit Sisters of Tanzania, who described their presence in the African countries of Tanzania, Kenya and Malawi, as well as in the United States, including Philadelphia.

Father Anthony Burrascano, campus minister at Villanova University, represented men religious as he spoke about the Augustinian friars’ ministries in the foreign missions and their long presence in Philadelphia.

After the brief presentations, the children spread out at tables and worked on their crafts to show what they had learned alongside the missionary religious.

“We made rosaries and we made a collage,” said Hannah Alfonso of St. Peter the Apostle School in Philadelphia. The missionaries “taught us to be grateful for what we have because a lot of places they have been, (the people) don’t have that much.”

Alfonso’s teacher Dorothy Meck brought her whole class of 17 students for the day, which became a pleasant surprise for her because the missionaries dovetailed with her current course of study.

“I thought it was really cool to learn about everybody’s story and where they’ve been,” she said, adding she most enjoyed crafting rosaries and making a collage of all she had learned from the missionaries.

The lead organizer for the day was Alixandra Holden of the Missionary Childhood Association, one of the archdiocesan Pontifical Mission Societies. She was pleased by the missionaries’ talks and by the students’ reactions.

“Children don’t usually associate serving and missionary work as something fun but now they’re hearing of these women and men who have traveled all around the world,”  Holden said. “Hopefully it opens their eyes that they can do that too and see these places through their service.”

Reflecting on the children’s craft projects, Holden believed the most beneficial one was the prayer intentions “because ultimately through the Missionary Childhood Association we have two goals, and that is to teach the children to pray and to sacrifice. They are sacrificing their time by being here today and they are going to learn how they can pray for children throughout the world, not just pray for their own intentions.”

To illustrate the point, she said all the children who made rosaries donated them to her office so they could be distributed to missionaries visiting the archdiocese.

After lunch and more casual conversations between the students and the religious, Mass was celebrated at the Cathedral Basilica of SS. Peter and Paul and included a visit to the shrine to St. Katherine Drexel to end the day.

Perhaps Andrew Huff summed up the Mission Day best as he learned “we can help others even if we don’t think we can,” even if one “could just say a prayer for them,” he said. 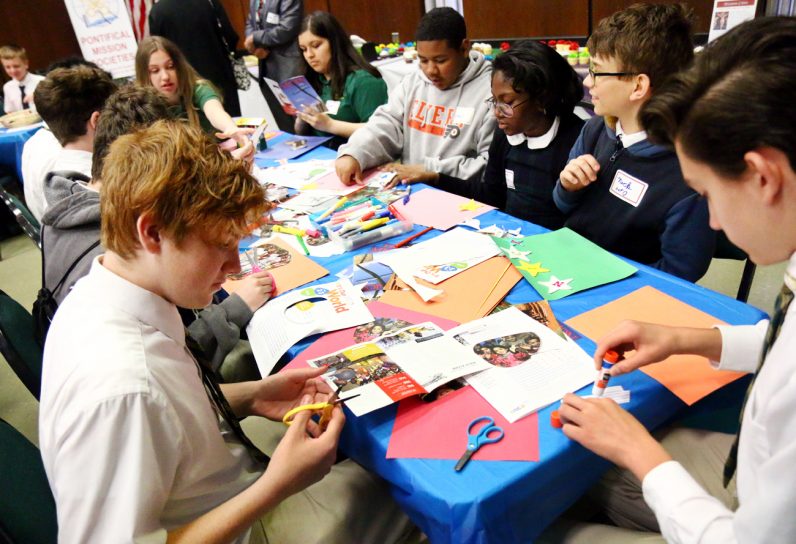 Students make collages to show what they learned about the church’s missionary work during Mission Day May 6. (Sarah Webb)

NEXT: Seven new priests to be ordained Saturday for archdiocese