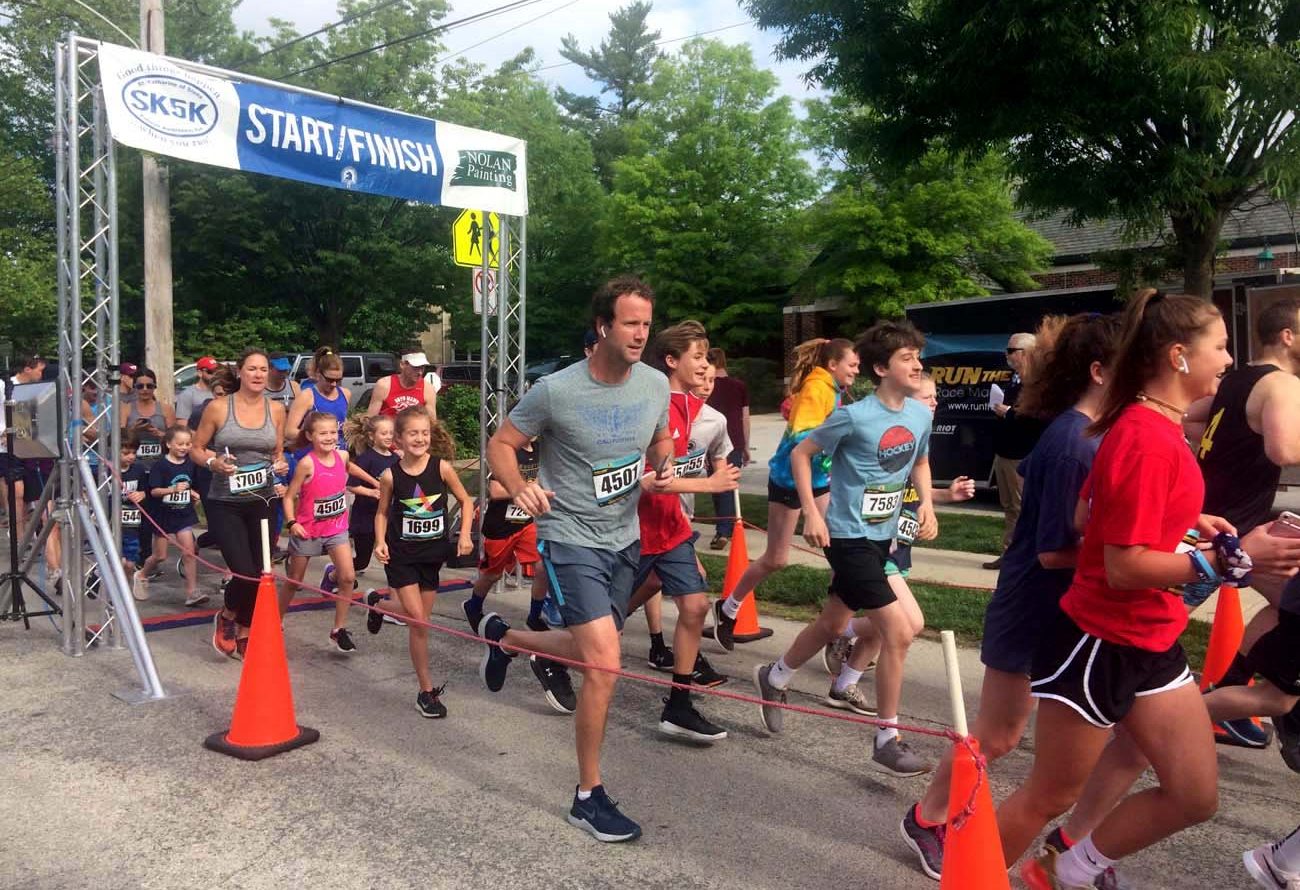 Runners set off on Saturday, May 11 for the ninth annual 5K race of St. Katharine of Siena School in Wayne, proceeds of which benefit the school.

For the ninth year in a row parishioners of St. Katharine of Siena in Wayne offered a fun way to bring the community together by hosting a 5K run on Saturday, May 11 on the streets around the parish campus and the surrounding neighborhood.

The “SK5K” event, which raises funds for St. Katharine School, took the planning and coordination of many in the school and parish working together.

“With the help of the SKS community, this is the second year that I’ve organized this event,” said race director Jessie DiLucia.

(See a photo gallery of scenes from the race here.)

The first steps are to apply for Radnor Township permits, secure a third-party company for timing and other race services and create a way for runners to register. The day would also not happen without loyal business sponsors from the local community.

“We try to build community to keep our school running,” said Tosti.

Volunteers are another necessity. Parent Dan Hayes, a member of the Knights of Columbus, seeks help from his fellow knights to marshal the race and protect the runners. Stephanie Twohig, who leads the school’s concert band and is the parish’s youth ministry leader, and her husband Mike have many years of experience in handling race-day setup, especially as former school parents.

Through Signup Genius, an online volunteer management tool, many people such as eighth-grade students can jump in and help out where necessary.

Because the event is now almost a decade on the books and one of the longest running community races in Radnor Township, it has become a Mother’s Day weekend tradition in the area.

New members of the community have learned about it through email, social media and by word of mouth. People love sharing the positive experiences they develop from participating in the event, said the organizers.

Nolan Painting, a sponsor, even gave St. Katharine’s a shout out on KYW radio and helped make neighboring counties aware of the special day in Wayne.

“Our goal here is not only to raise funds for the school, but provide an inviting and fun family atmosphere that keeps people coming back each year,” said DiLucia.

Folks who did come out had the option of running the 5K or the one-mile fun run that followed, walking or simply socializing with friends. Msgr. Brouwers began the morning with a suitable pre-race blessing and the St. Katharine School band played the National Anthem.

“Every athlete exercises discipline in every way,” he said. “Run so that you may win. Bless this day. Keep us safe.”

The band of students, some of whom played for the first time at the race, performed under Twohig’s direction.

Around 9 a.m. it was time for the race to start and the runners sped off as spectators cheered them on along the route. School parent Jen McGowan worked as DJ for the day providing background music and later announcing the winners.

Prevailing as the overall winner was Austin Cooper who finished in 18:37. Joseph Garzio (19:22) and Tommy Barausky (19:26) followed in second and third. Olivia Dhavale (21:22) triumphed as the female winner, placing 11th overall.

“It felt good at the end,” said Dhavale, a seventh grader at St. Katharine’s and a member of the school’s track team. “You have to sprint.”

This was an affair for several families including the Hnats — Corey, Janet and their three children Justin, Connor and Molly who attend the parish school. They have participated in the 5K for seven years now.

“We love this run,” said Janet. “It’s a great course, a great neighborhood.”

Jim and Jessie Bryan came with their children as well. They are 5-year old Georgia, 4-year old Catherine and 19-month-old Tuck, introducing a new generation to the fun.

The members of the Manion family are no strangers to this run as some have participated all nine years. Joe Manion came out with his daughter Caroline, a St. Katharine’s School alum, and his brother Matt also came with daughter Kathleen, a sixth grader at the school.

Every year the event has raised between $15,000 and $25,000. Msgr. Brouwers asks that the proceeds offset the costs of items on the school’s wish list such as a new water fountain and to enhance many areas of the school’s technology.

“We’re fortunate to have a pastor that has vested in our school and allowed us to put money back into the school,” said Tosti.