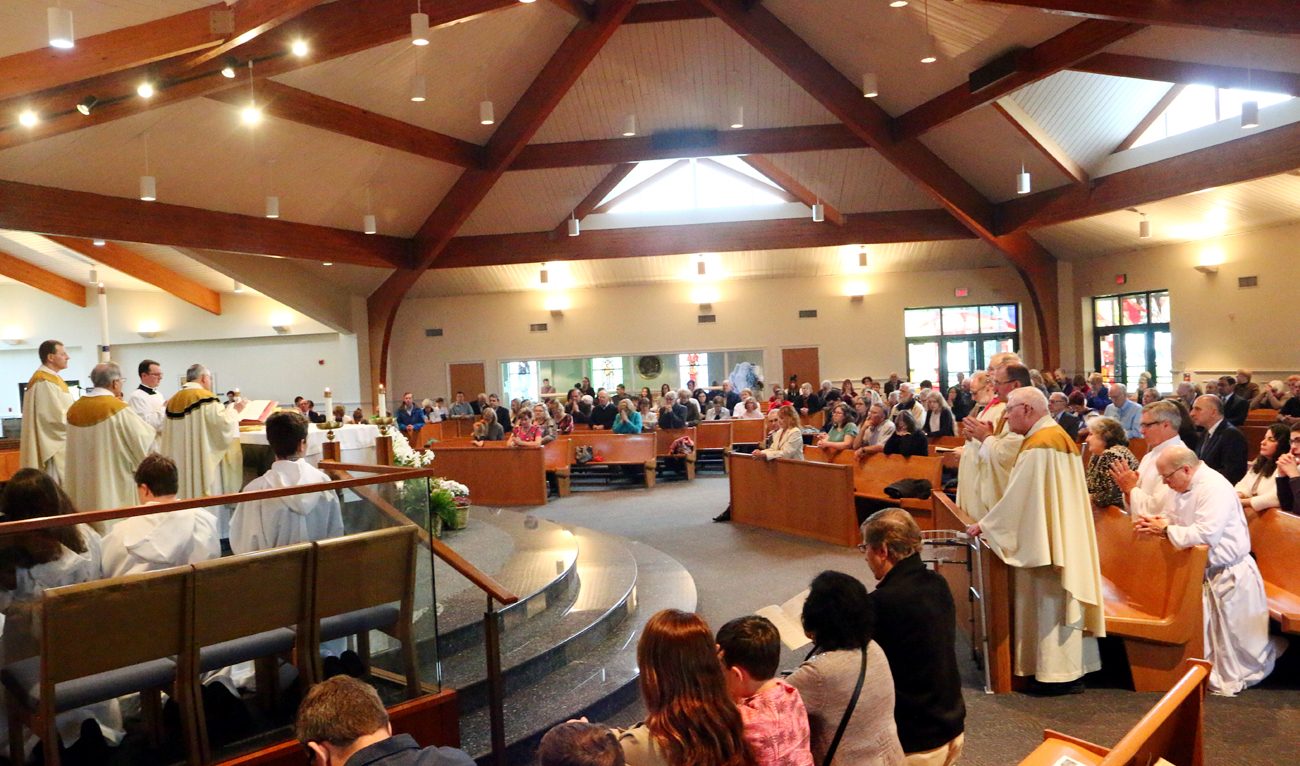 Parishioners and guests fill Our Lady of the Sacred Heart Church in Hilltown to celebrate the parish's 100th anniversary and welcome Archbishop Charles Chaput, who was main celebrant for the Mass on May 5.

When Our Lady of the Sacred Heart Parish in Hilltown, Upper Bucks County was established in 1919, there weren’t that many Catholics in the area, and the new parish encompassed a sprawling 25 square miles.

Today of course, the Catholic population is thriving in the area, as Archbishop Charles Chaput saw when he visited for the 100th anniversary Mass for the parish on Sunday, May 5.

(See scenes from the Mass in our photo gallery here.)

According to parish histories, only 25 people attended the first parish Mass celebrated by Father Charles Knittel, the Dutch-born first pastor who later would become a missionary in Central America.

But those who did attend were committed to the faith. Earlier Masses in the area took place in the home of Edward and Anna du Mee, who would donate the land on which the first church would be built and who would remain lifelong parishioners.

The challenges were many, including anti-Catholicism in the area, according to one history. But the parish did grow to a point that in 1927 a second floor was added to the church for a school staffed by the Missionary Sisters of the Sacred Heart, who remained part of the parish for 52 years.

The Great Depression affected Our Lady of the Sacred Heart in a way that would not be the experience in Philadelphia. Because of hard times, families in the outlying areas could not afford to buy gasoline to drive to church, which led to lower attendance temporarily.

This was also the case during World War II because of gas rationing and families relocating to industrial areas for war work. In 1944, in order to serve families who had to travel a distance for Mass, the parish opened a chapel dedicated to St. Patrick in a converted building in Dublin about five miles away.

Real growth began after World War II, part of the movement experienced all over the Philadelphia Archdiocese as Catholic families increasingly moved from the city into the suburbs.

In 1957 a new school was built and by the 1970s, when that early worshiping congregation of 25 had grown to about 750, it was clear that an entirely new church would have to be built.

The new church seating 500 was erected, with the first Mass celebrated on Christmas Eve, 1979. At the same time St. Patrick Chapel was closed. But within two decades the new church was also too small for the needs and had to be virtually rebuilt with a capacity of 950, as it stands today.

As with many parishes, Our Lady of the Sacred Heart no longer has a school, but it does have a robust religious education program, according to Father John Schiele, the current pastor. He cited the program’s capable lay teachers including young adults, with more than 500 children enrolled most years.

“We also get adult candidates but not many,” Father Schiele said.

He also took note that baptisms consistently outnumber funerals, a good indication of a healthy parish. Also there are more than 1,000 worshipers for weekend Masses, with the liturgies supported by an excellent music program, according to the pastor.

“We are living the life of the church,” Father Schiele said. “We baptize kids, we teach them, we are present for the people who need us. We have a food pantry that is well used; it is not like there is no poverty in the suburbs.”

Clearly the church, through Our Lady of the Sacred Heart, is alive and well in Hilltown.

The parish choir of Our Lady of the Sacred Heart sings in front of one of the unique features of the church: one of two large clear-glass windows that offer views of the natural landscape of trees and rolling fields of Upper Bucks County. (Sarah Webb)

NEXT: Runners take to streets of Wayne, helping Catholic school