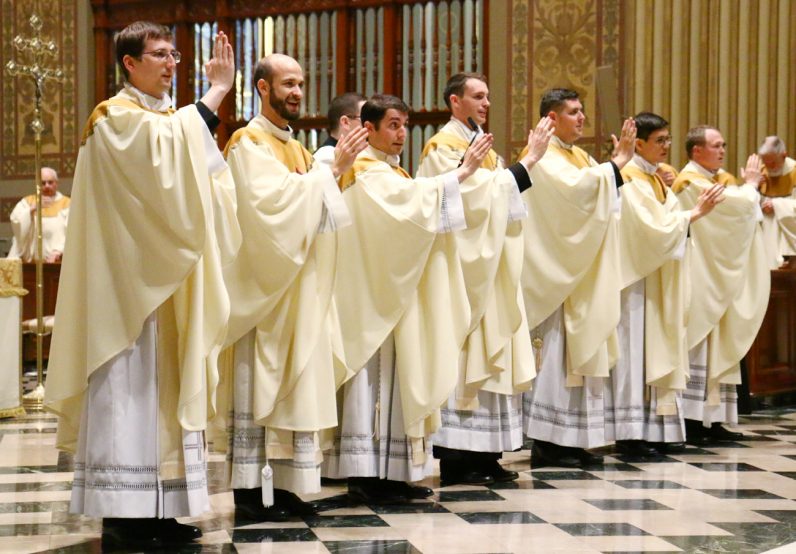 The newest priests for the Archdiocese of Philadelphia give their blessing during the Mass of ordination May 18 at the Cathedral Basilica of SS. Peter and Paul, Philadelphia. (Photo by Sarah Webb)

It was standing room only, even with temporary seating added, at the Cathedral Basilica of SS. Peter and Paul on Saturday, May 18 as Archbishop Charles Chaput ordained David Buffum, Francesco D’Amico, Alessandro Giardini, David O’Brien, Alexander Pancoast, Anthony Raymundo and Jonathan Rice to the priesthood for service in the Archdiocese of Philadelphia.

“Here you are, my dear brothers, at the moment of your ordination,” Archbishop Chaput said in his homily. “Love as Jesus loved, and you will be the source of his salvation for the world.

Rejoice, the archbishop counseled the men, “in who you are in God’s plan for you and you will have no reason to fear. Allow yourselves to be consumed by God, have confidence in God and you will be great priests.”

No matter how often one sees the annual ordination ceremony it remains impressive. Perhaps one of the most powerful moments is when the men to be ordained lie prostrate before the altar as the sung Litany of the Saints fills the cathedral.

Most essential of course is when the bishop, in this case Archbishop Chaput, lays his hands on each man one by one and pronounces the words of ordination.

Possibly most impressive for the newly ordained is when they gather at the altar to concelebrate the holy sacrifice of the Mass with their bishop, a power they have just received and will continue to celebrate for the rest of their life.

(Watch the full ordination Mass below:)

After the Mass, the newly ordained priests posed for pictures with the archbishop, their family and friends, and imparted their first blessing on the many who wished it.

Everyone in attendance had their own memories that they will take from the Mass.

Liz Raymundo, the mother of Father Anthony Raymundo, remembered how when he was a little boy, she dressed him as a monk for Halloween. “This is a glorious day,” she said. 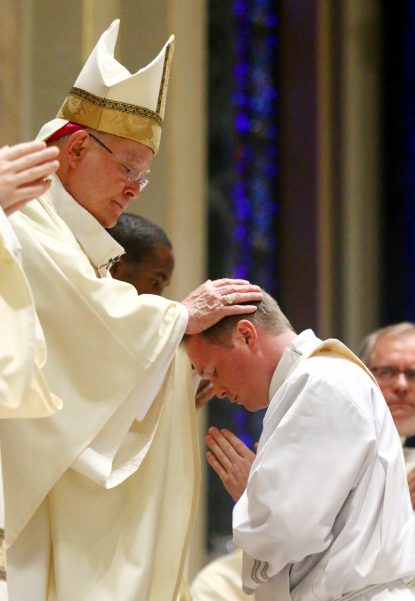 Archbishop Charles Chaput lays hands on the head of Jonathan Rice, ordaining him a priest.

Joe Aquilante is not a blood relation to any of the new priests, but he taught Fathers David O’Brien and Alessandro Giardini at Bishop Shanahan High School, Downingtown.

“I’m not surprised either of them became a priest,” Aquilante said. “Alessandro was vice president of the student council and David was the secretary. I surmised they both had a vocation. They were great leaders then and they will be great leaders for the church.”

“It’s been a long journey,” said Eduardo D’Amico, who with his family made a long journey from Italy to see his son Francesco ordained. “Now we are all happy, my wife and all my children are happy.”

“I’m in heaven! This is a real honor,” said Bonnadette O’Brien, the mother of Father David. “When he was younger, he thought about this, but he was away from it, and God called him. It is awesome.”

“This is amazing,” said Father Pancoast after the ceremony. “I’ve been dreaming about this for nine years and here it is now.”

But now the real work begins as all seven of Philadelphia’s new priests have been given their assignment as a parochial vicar in an area parish:

Pray for them and pray that more young men will follow their example. 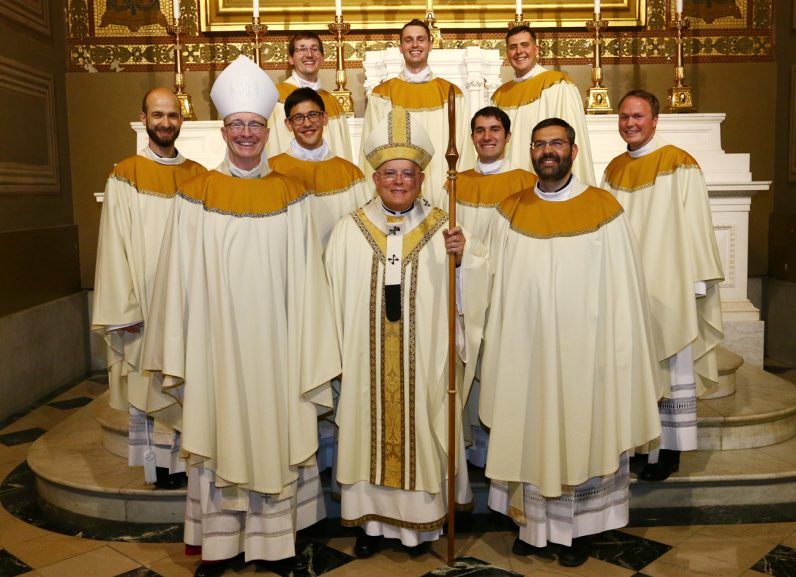 PREVIOUS: Merger of 4 city parishes into one akin to Emmaus journey