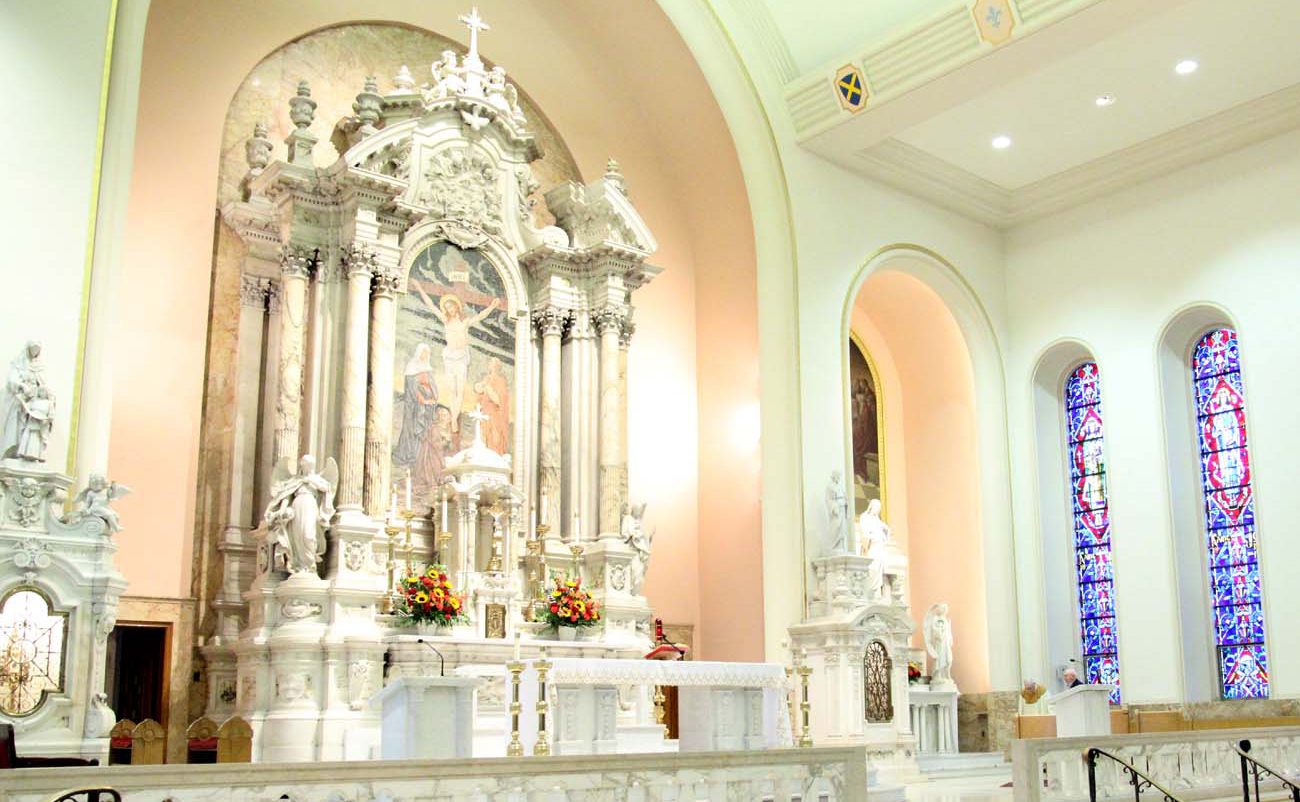 The upper church of St. Anne Parish in Port Richmond is now an archdiocesan shrine where faithful may visit the parish's relic of the saintly mother of the Blessed Virgin Mary, seen at far left. (Photo by Sarah Webb)

The upper church of St. Anne Parish in the Port Richmond section of the city has been designated a shrine of the Archdiocese of Philadelphia in honor of the saint believed to be the mother of the Blessed Virgin Mary.

Father Skip Miller, pastor of St. Anne’s, announced the designation by Archbishop Charles Chaput to the parish community during a Mass on Sunday morning, May 19. Also present were the friends and members of the St. Anne’s Guild.

“For 120 years the good people of St. Anne’s Parish and the members of the St. Anne’s Guild have faithfully sought the powerful intercession of St. Anne, the mother of Mary and grandmother of Jesus,” Father Miller said. “Her most compassionate concern for those who come to her in need continues to inspire hope and faith in our lives and our parish and neighborhood.”

Devotion to St. Anne at the parish really took hold when in 1898 when then-pastor Father Thomas J. Barry brought back from Rome what was believed to be a significant relic of St. Anne — a small piece of her wrist bone.

A reliquary containing what is believed to be a wrist bone of St. Anne is displayed in the upper church of St. Anne Parish, now an official shrine of the Archdiocese of Philadelphia.

Interestingly, there is no mention of either Anne or Joachim in the four Gospels. They are first mentioned in the Protoevangelium of James, an apocryphal document attributed to the Apostle James but possibly written in the second or third century probably from oral history. A much more colorful account of the Nativity than that of St. Luke, it begins with the story of Anne and Joachim and follows through to the Nativity of Jesus.

Because it was not included among the books the early fathers declared were divinely inspired and placed in the Bible, it is up to the individual Christian to believe or reject it. But clearly the Blessed Virgin had parents and Joachim and Anne, who raised a wonderful daughter, are worthy of Christians’ veneration.

After receiving the relic of St. Anne, devotion to her and novenas to her became hugely popular at the parish, drawing devotees from well beyond its borders. In the era when her feast included an outdoor procession the nearby streets had to be closed off.

As it is today, the annual novena leading up to her July 26 feast day (and that of her husband) still draws about 2,000 people and that is likely only to grow now that the upper church is an archdiocesan shrine.

Novenas as a general rule usually draw more women than men. But anyone going to St. Anne’s Novena may see more young women than one might ordinarily expect. That’s because unofficially at least, St. Anne has traditionally been considered especially helpful to young ladies seeking a good husband.

There is a refrain that goes, with slight variations, “St. Anne, St. Anne, find me a man as fast as you can.”

“But we see many families coming too,” Father Miller said, adding some people come quite a distance, including a woman who has been coming from Ireland every year for the past decade.

Father Miller is especially grateful to Archbishop Chaput for designating St. Anne’s upper church as a shrine to their patron saint. He was ordained a bishop on her feast day, Father Miller said.

Now St. Anne Shrine joins others in the Philadelphia Archdiocese including the Shrine of St. Katharine Drexel, whose tomb is now located at the Cathedral Basilica of SS. Peter and Paul; the Miraculous Medal Shrine in Germantown and national shrines to St. Rita of Cascia in South Philadelphia, St. John Neumann in North Philadelphia and Our Lady of Czestochowa in Doylestown, plus other shrines in various parishes.

But having the official shrine is just one of the good things happening at St. Anne’s. Like all of now gentrifying Port Richmond, matters are looking up at the grand old parish.

(Read more about the history and current parish life at St. Anne’s at the website.)