Ukrainian Catholics set for enthronement of new leader in Phila. 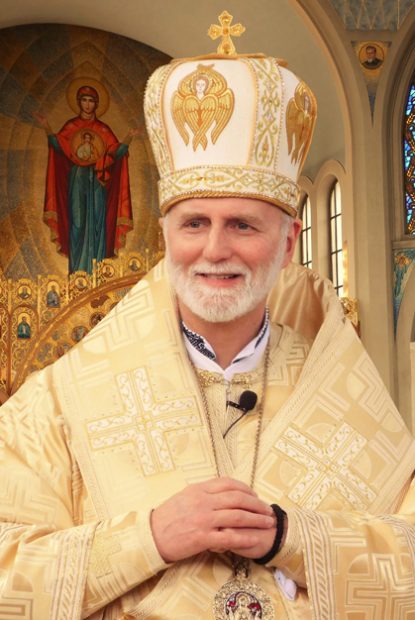 As such he will be the spiritual leader of the Ukrainian Catholic Church in the entire United States.

He succeeds Metropolitan Archbishop Stefan Soroka who resigned for health reasons in April 2018. Since then the archeparchy has been led by Bishop Andriy Rabiy as apostolic administrator.

The appointment of Metropolitan Archbishop Gudziak, the 58-year-old native of Syracuse, N.Y., by Pope Francis was announced Feb. 18 following the recommendation by a synod of Ukrainian Bishops held in September 2018.

In the cathedral, Major Archbishop (Patriarch) Sviatoslav Shevchuck, the head and Spiritual Father of the Ukrainian Catholic Church worldwide along with Archbishop Christophe Pierre, the papal nuncio to the United States, will preside at the liturgy. Archbishop Pierre will also present greetings from the Holy Father and present the Papal Bull, confirming Archbishop Gudziak’s appointment.

Among the concelebrants of the liturgy will be Archbishop Gudziak, Philadelphia’s Archbishop Charles Chaput, Archbishop of New York Cardinal Timothy Dolan, Archbishop Emeritus Soroka and other archbishops and bishops.

Archbishop Gudziak, who is the son of immigrants to the United States from Ukraine, received his bachelor’s degree from Syracuse University in 1980 with further studies at the Pontifical Urban University in Rome, at Harvard University and the Pontifical Oriental Institute. He returned to Ukraine, his ancestral homeland, in 1992 where he served in various position, mostly in the field of theological education and he is credited as the founder of the Ukrainian Catholic University in Lviv. He was ordained to the priesthood in 1998.

He was ordained to the episcopacy in December 2012 to serve the Apostolic Exarchate of France, Benelux (a union of Belgium, Netherlands and Luxembourg) and Switzerland for the Ukrainians, which was raised to a full apostolic exarchy in January 2013 with the name Exarchy of St. Vladimir in Paris.

His work especially in his Ukraine years did not go unnoticed in the wider world. Earlier this month the University of Notre Dame announced Archbishop Gudziak will receive its prestigious Notre Dame Award at a ceremony to be held in Lviv on June 29.

He joins such other distinguished past recipients as former U.S. President Jimmy Carter with his wife Rosalyn, Mother Teresa of Calcutta and John Hume of Northern Ireland.

“In the face of innumerable challenges, Archbishop Gudziak has made the Ukrainian Catholic University a center for cultural thought, Christian witness and the formation of a Ukrainian society based on human dignity,” said Notre Dame President Father John Jenkins, C.S.C., at the time of the announcement.

While the enthronement of Archbishop Gudziak will take place on Tuesday, June 4 it is really the centerpiece of a weeklong celebration, according to Archpriest Father John Fields, the communications director for the Philadelphia Archeparchy.

Among the principal events:

Sunday, June 2 at 3:45 p.m. — Opening of an art exhibit “Icons on Ammo Boxes” at the Cathedral of the Immaculate Conception. At 4:30 p.m. also at the cathedral a lecture by George Weigel titled “Twentieth and Twenty-First Century Mission: Eastern Catholics and the Universal Church.”

Tuesday, June 4 — The Enthronement Liturgy followed by a celebratory reception on the cathedral grounds and a musical concert.

Thursday, June 6 — Encounter with Religious and Clergy continues. Also a conferance at the Catholic University of America in Washington, D.C.

Saturday, June 8 — Youth Day programs at the Cathedral of the Immaculate Conception and also a procession to the nearby Shrine of St. John Neumann.

Sunday, June 9 — A Hierarchical Divine Liturgy celebrated at the Cathedral of the Immaculate Conception presided over by Major Archbishop Shevchuk with Archbishop Gudziak and other members of the clergy. Also a Morning Prayer service for deceased bishops and archbishops in the Cathedral Crypt and an afternoon prayer service at St. Mary Cemetery in Philadelphia’s Fox Chase section.

PREVIOUS: Seniors kick off summer, and their shoes, at archdiocesan barbecue